Nevada casino regulators are expected to vote Nov. 21 on a proposal requiring gaming companies to maintain written policies to protect employees against unwelcome behavior on the part of coworkers and customers.
Photographer: SEBASTIEN BOZON/AFP via Getty Image

Regulators are expected to vote Nov. 21 on a proposal requiring gaming companies to maintain written policies to protect employees against unwelcome behavior on the part of coworkers and customers—in effect, reviving an attempted crackdown on sexual harassment that fizzled last year.

The plan in front of the Nevada Gaming Commission takes a broader look at misconduct than the initial version, which focused on sexual harassment and didn’t extend to patrons. But two Las Vegas researchers say limits on what companies will have to do to comply could make the policy reforms largely symbolic.

The debate shows the challenges of translating issues raised by the #MeToo movement into enforceable rules, even with the support of two Nevada governors and the state’s biggest casino association. Regulators ultimately favored a more limited approach, and dropped a reporting requirement from the 2018 proposal, based on potential impacts on companies and their own ability to ensure compliance.

Many casinos already have policies in place to protect workers against the forms of harassment and discrimination included in the proposal, which are illegal under state and federal law. But while a large company can settle a harassment lawsuit for a relatively small price, the fear of running afoul of regulators that control a casino’s gaming license could hold more weight, said Ann C. McGinley, a professor at the William S. Boyd School of Law at the University of Nevada, Las Vegas, who has researched harassment issues.

“Their gaming license is basically everything,” McGinley said. 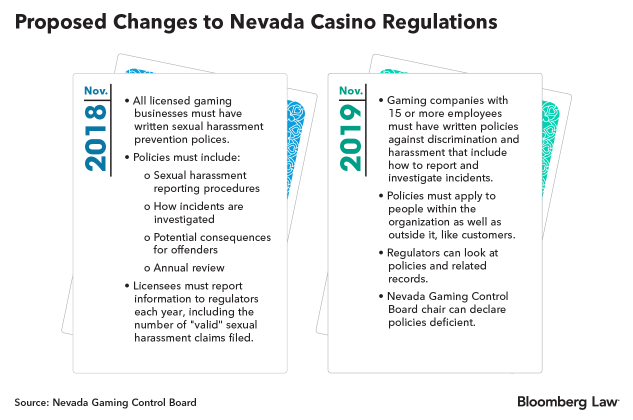 The proposal would add a new section to an existing regulation that outlines casino discipline. Nevada gaming companies with 15 or more employees would be required to establish written policies against harassment and discrimination based on factors such as sex, race, color, gender identity, and national origin.

Those policies would have to specify how to report and investigate allegations of harassment or discrimination, and regulators would have the power to determine if the policies are deficient. That would send a clear signal to the gaming industry about the type of workplace protections the gaming board expects, said Sandra Douglass Morgan, the board’s chairwoman.

“It’s long overdue,” she said in a telephone interview.

The plan the board proposed last year, developed under former Chairwoman Becky Harris, would have required all licensees to have sexual harassment prevention policies featuring specific components, such as potential consequences for offenders. License holders would have been required to submit checklists on their policies each year and to report to the board on the number of “valid” sexual harassment complaints filed.

That reporting requirement was intended to help regulators determine the scale of sexual harassment in the gaming industry, said Harris, now a distinguished fellow in gaming and leadership at the University of Nevada, Las Vegas’s International Gaming Institute.

“Some way to look at data and compare year over year becomes important,” Harris said.

Reporting requirements, though, would have become unwieldy when applied to every type of discrimination and harassment included in the proposal, Morgan said. The board can “absolutely actively seek that information,” she said.

The Nevada Gaming Commission, which sets policies for the industry, never voted on Harris’s proposal. Chairman Tony Alamo said he wanted to wait until the state finished its investigation into Wynn.

The commission fined $20 million as part of a settlement over its handling of allegations of sexual harassment against Wynn, its former CEO. The gaming board is seeking disciplinary action against Wynn himself, which he’s contesting.

Both proposals have had backing from the Nevada Resort Association, which represents dozens of casinos owned by companies such as MGM Resorts International and Las Vegas Sands Corp. Combating discrimination and harassment is a “critically important” issue, said spokeswoman Dawn Christensen.

Morgan, the gaming board chairwoman, said she hasn’t had many conversations with individual casinos on the potential changes. No one spoke for or against the proposal at a recent gaming board meeting, The Nevada Independent reported.

Some casinos last year said the rules regulators already have in place—as well as state and federal law—are enough to address sexual harassment. Others argued the extra requirements in the former proposal were too prescriptive.

McGinley, the professor at UNLV’s Boyd School of Law, argued adding harassment and discrimination into gaming regulations is “absolutely essential” to send a message to employees and customers. Still, it’s unclear what impact the plan’s approval would have, particularly for larger organizations that already have written policies, she said.

“I doubt they will feel they have to do much,” McGinley said, adding that losing the reporting requirement could make the regulation less useful.

Policies alone are “woefully inadequate” at preventing harassment, said Rebecca Gill, associate professor of political science at the University of Nevada, Las Vegas. But previous proposals—such as requiring casinos to report harassment complaints—can have unintended consequences or require the gaming board to “get in the weeds” of each case, she said.

“My optimism is this is a step toward a broader conversation about what has been failing, particularly in the gaming industry,” she said.