National Labor Relations Board officials have ordered mail balloting in every union election scheduled since the board established its new test for determining whether votes should be held in person or by mail due to the pandemic, a Bloomberg Law analysis revealed.

NLRB regional directors have called for voting by mail in all 30 decisions that applied the framework the board established in its Nov. 9 ruling in Aspirus Keweenaw, which created a six-factor test to guide when virus-related conditions necessitate mail balloting.

Those results signal that union elections likely will be held by mail for the foreseeable future, with the virus surging as cold weather pushes more activities indoors. Employers generally prefer in-person elections—due in part to concerns about union fraud and workers being disenfranchised because of complications with mail balloting—and have consistently sought manual balloting during the pandemic.

More than 312,000 people have died in the U.S. from Covid as of Dec. 18, according to Bloomberg News data, and several states in recent days have hit daily records for new cases. For the next two to three months, the number of people who will die from Covid-19 each day could exceed the deaths in the 9/11 attacks, Centers for Disease Control and Prevention Director Robert Redfield said this month.

The spread of the virus has been central to the NLRB regional directors’ orders for mail-ballot union elections. An increase in Covid-19 cases or high test-positivity rates were important factors in all but one of the decisions that applied the board’s pandemic election framework.

In that single exception, a regional director called for mail balloting because the workers were scattered across five states—but added that difficulties in holding a safe election further supported the mail-ballot order.

Regional directors also ordered two mail-in elections without applying the Aspirus test, and there were four other contests in which a union and the employer previously agreed to mail balloting.

Voting During the Pandemic

The NLRB suspended all in-person union elections for about two weeks when the scope of the virus’ spread became clear in March.

Roughly nine in 10 union elections were subsequently held by mail leading up to the NLRB’s Aspirus decision. The board put at least seven union elections on hold starting in late August while it developed its pandemic-specific test for deciding what type of voting method is appropriate.

“The decision provides standards to ensure safety for all involved in our representation elections during this unprecedented period,” NLRB spokesman Kevin Petroccione said.

One factor in the Aspirus framework bases decisions about mail-ballot elections on statistics for the county where the employer’s facility is located. An increase in the 14-day trend in new confirmed cases of Covid-19 or a 14-day testing positivity rate of 5% or higher would trigger voting by mail.

Regional directors may need to use narrower or broader data depending on the particular situation, the NLRB said. For example, it may be necessary to consider other data if workers live outside of the county where the employer’s facility is located, the board said.

Statewide statistics generally show high rates of positive tests across the U.S. Just two states—Vermont and Hawaii—and Washington, D.C., had seven-day positivity rates under 5% as of Dec. 18, according to statistics kept by John Hopkins University. 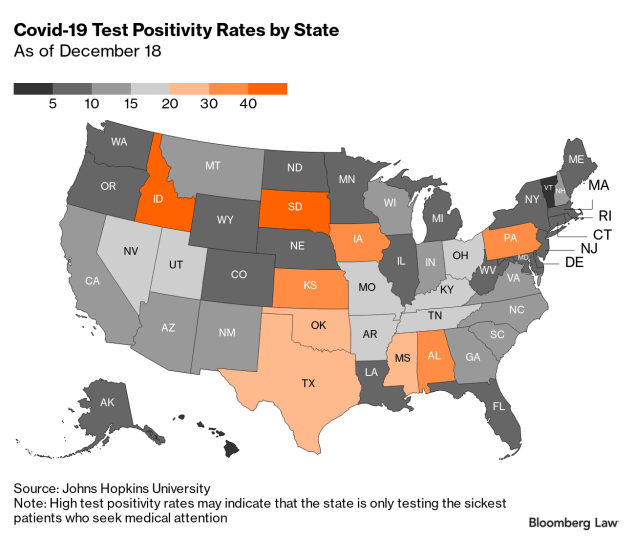 Companies facing union representation elections have asked for manual voting in every case decided under the Aspirus framework. But some legal experts questioned this approach.

It isn’t reasonable for an employer to request a manual election when pandemic statistics virtually guarantee that regional directors will order mail balloting, said Jerry Hunter, an attorney who represents employers for Bryan Cave Leighton Paisner.

“Employers should use their energy to negotiate for something as part of a stipulated election agreement, like longer or shorter election deadlines,” said Hunter, who served as NLRB general counsel during the George H.W. Bush administration.

Agreeing to a mail-ballot election provides a set timeline for the vote early in the process, making it easier for employers to run campaigns and maximize turnout, said Jonathan Spitz, an attorney at employer-side firm Jackson Lewis who’s litigated union election cases during the pandemic.

When assessing what type of election to hold, regional directors seem most concerned with the safety of the NLRB staffers who would have to administer the election, Spitz said. And those officials have the latitude to order mail-ballot elections even if virus statistics and other objective measures don’t make it a sure thing, he said.

“There’s no question that there’s enough subjectivity in the Aspirus factors that, if the RD wants to justify a mail ballot, he or she can,” Spitz said.