Workers stand on a balcony of a hotel under construction in Los Angeles on Sept. 7, 2017.
Photographer: Dania Maxwell/Bloomberg via Getty Images

The same wireless technology that lets you set a home’s air conditioner settings with a smartphone or guides your car to a restaurant is also helping to protect workers from safety hazards.

Companies long associated with safety products, such as Honeywell International Inc. and 3M Co., and technology giants, including IBM Corp. and Accenture PLC, are offering advice and high-tech products while newcomers seek niches with specialized gear.

Driving the trend is rapidly improving wireless and mobile technology, and a growing acceptance among workers and managers at ease with using smartphones and tablets.

Devices, often small enough to fit inside a hard hat or a pocket, can detect whether an ironworker is connected to a fall protection lanyard, how close construction workers are to moving heavy equipment, whether poisonous gases are present, a refinery worker’s body temperature and heart rate, and if delivery drivers are bending over too often while unloading trucks.

But making sense of the information coming from dozens of sensors spread across a worksite or an entire company can be challenging for companies.

The story of how a beer distribution company based in the Pacific Northwest uses wearable technology to reduce injures shows how new electronics can help solve an old problem: ergonomics.

At Portland, Ore.-based Columbia Distributing, managers were looking for way to reduce risks for workers lifting beer kegs that can weigh up to 180 pounds, and cases of beer weighing about 28 pounds each.

With the help of Columbia’s physical therapy provider, Work Right NW, three Columbia employees were outfitted with sensors, smaller than a pack of cards. The sensors are made by biomechanics motion analysis technology company dorsaVi Ltd. in Melbourne, Australia, and can detect the speed and movement of anything they are attached to.

The sensors recorded the workers’ movements for one day, Hollis said, to measure when the workers were straining, lifting or bending too much—with and without the exoskeleton.

And the analysis found that constantly moving beer cases posed a larger risk than the infrequent lifting of kegs, Hollis said. Surprisingly, workers using the exoskeletons were more likely to overexert themselves than non-users.

With information from the wearables as reference, Hollis said, Columbia is now looking to improve how it fills and unloads delivery trucks, hoping to cutback how often beer cases are lifted and moved.

And the exoskeletons weren’t purchased.

While Columbia’s use of the motion sensors was intended was for a one-time test, other technologies are expected to be used anytime a worker is away from their desk. One trade in which wireless sensor technology is being widely adopted is oil and gas exploration and refining, especially when workers are alone.

Blackline Safety Corp., based Calgary, Alberta, has developed a line of hand-held gas detection devices that can also double as emergency notification and locator systems.

The family of devices, called G7, fill a number of worker safety requirements, Stinson said. Beyond detecting gases, the devices have motion sensors able to automatically notify managers if a worker has fallen or not moved for several minutes; a system prompting workers to check in at specified times; a speaker phone; and a messaging system.

While some of the technology is similar to smart phone offerings, the devices are designed for use in hazardous situations where an errant electrical spark could set off an explosion, Stinson said.

And some features are low tech. To ensure reception in areas with aging mobile phone networks, the devices are compatible with slower 3G cellphone networks. 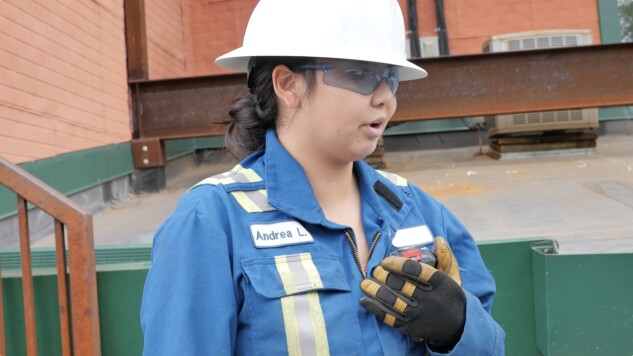 For larger employers looking at how to introduce wireless and wearable safety technologies to their sites, companies like IBM, Honeywell and Accenture offer advice on setting up systems and then how to analyze the data.

Among the goals is to have information on whether workers are in danger instantaneously available to other workers and managers. For example, a worker could be required to scan the barcode attached to a fall protection harness to show he selected the correct harness. The supervisor could confirm the choice.

But a tricky part to creating an automated notification system is teaching it to know the difference between a hazard and routine actions.

“Understanding what is good and normal is hard,” IBM’s Greenstein said.

A worker’s heart rate increasing shouldn’t trigger an alarm if he’s exerting himself as expected. Or a helmet-mounted sensor losing contact with a worker could show the worker took the helmet off, not that he fell. Programming safety technology to correctly recognize hazards can mean teaching the company’s safety rules to a computer, Greenstein said.

Wireless technology also has a role in training workers for hazardous tasks without exposing them to the danger, Brent Blum, Accenture’s enterprise extended reality lead for North America, told Bloomberg Environment from his San Francisco-area office.

One example is using virtual reality goggles to teach welding techniques, Blum said. A student’s welding gun becomes part of the virtual reality display, allowing the student to practice without being exposed to fumes and without having to practice in a real welding shop.

Employees and others coming onto worksites will have to be notified of the systems, but that can done in some cases by simply posting a sign, the attorneys said. Provisions also may have to be made for areas where privacy is expected.

Paul Haining, chief environmental, safety, and health officer for Skanska USA said the company is working with suppliers such as 3M and heavy equipment manufacturer Caterpillar Inc. to integrate wireless and wearable technologies.

Prototype systems are in use at U.S. and foreign construction sites of Skanska USA’s overseas partners, Haining said. In the future, the wireless systems could be part of the safety gear.

When a worker attaches his fall protection harness to a lanyard, that action would prompt an automatic notification.

A video system using cameras wirelessly linked to a computer system would be able to detect workers lacking the correct tools or gear and automatically notify the worker and supervisor. And a motion sensor worn by a worker could detect changes to how he walks, signaling the possible start of an overuse injury.

The wealth of safety data can be used to identify trends and leading indicators, moving safety staff from reacting to mishaps to preventing them.

To contact the reporter on this story: Bruce Rolfsen in Washington at brolfsen@bloombergenvironment.com