Nearly half of U.S. states will ring in the new year with higher minimum wages, with 30, as well as the District of Columbia, now over the federal rate of $7.25, a rate that’s not changed for more than a decade.

In total, 25 states will see boosts to their minimum hourly pay requirement in 2022, according to data from the Economic Policy Institute and the National Conference of State Legislatures. Four states—Oregon, Florida, Nevada, and Connecticut—will phase in their increases later in the year.

Eight of those will be bumping their minimum based on the consumer price index, while other state rates are required to go up by a specific dollar amount enacted under state legislation, according to Landon Jacquinot, a policy analyst at the National Conference of State Legislatures. D.C. also is set to increase its minimum wage according to the consumer price index, but the amount hasn’t been announced.

Eight states—California, Connecticut, Delaware, Florida, Illinois, New Jersey, New Mexico, and Virginia—are scheduled to raise their minimum wage by at least $1 at some point in 2022.

Delaware’s minimum wage will rise to $10.50 from $9.25 once the new year begins. The state became the 10th plus D.C. to enact a $15 minimum wage law earlier this summer, though that rate is being phased in over four years.

Virginia delayed one of its annual increases in 2021 due to the coronavirus, but is still scheduled to see its hourly rate jump by $1.50 to $11 in January. 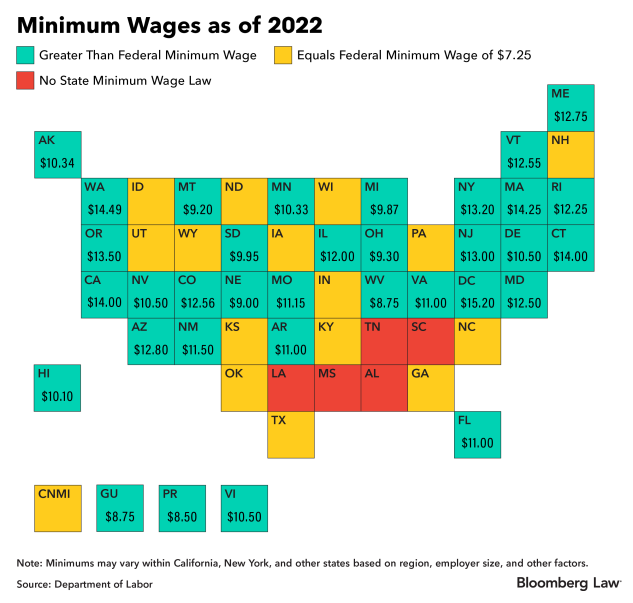 A Democratic-controlled Virginia state legislature passed a minimum wage increase in 2020, requiring increases up to $12 and then calling for another vote in 2024 to decide whether to continue to $15. But the future of that wage increase seems less certain since Republicans recently swept Virginia’s statewide election, taking back control of the state’s House of Delegates, as well as the governor’s office.

Rhode Island’s $11.50 hourly minimum wage also is scheduled to increase to $12.25 on Jan. 1. The New England state’s wage floor is set to increase annually until it reaches $15 in 2025, under legislation signed last spring.

The rising minimum pay rates at the state level come as legislation to raise the federal minimum wage has remained elusive for more than a decade. The minimum wage is $7.25 an hour under the Fair Labor Standards Act, a rate that was last updated in 2009.

The federal standard acts a floor, which is why more than two dozen states have passed laws to raise their minimum rate above the federal level.

“Minimum wage increases [at the federal level] have become less frequent and they’ve become smaller when they do actually happen,” Ben Zipperer, an economist at EPI, said in a phone interview.

Although President Joe Biden campaigned on raising the minimum wage to $15, procedural hurdles in the Senate prevented Democrats from including a measure to boost the federal rate in their last coronavirus rescue package earlier this year.

It was also unclear if Democrats would have full support within their own party on a $15 minimum wage bill, even if they were able to use special budget procedures to pass the legislation without any GOP votes.

The Biden administration has taken other routes to achieve that goal—like raising the minimum wage for federal contractor employees to $15 an hour on new or updated contracts starting Jan. 30.

Even as California nears a $15 hourly wage floor for many employers, advocates of a “living wage” in the state already have begun pushing for a ballot measure that would increase that minimum to $18 per hour by 2025. Supporters filed paperwork with the state attorney general’s office and will need nearly 1 million signatures on a citizen petition for the proposal to make it onto November 2022 ballots.

Small-business owners see the wage increases as yet another challenge during a pandemic and difficult economic environment, said Tim Goodrich, executive director of state government relations at the National Federation of Independent Business.

“We’re seeing businesses struggle right now because of labor costs, lack of labor, and supply chain issues,” he said, also noting the constantly changing regulations related to Covid-19 safety. “It’s baffling to them that we would even be talking about a minimum wage increase right now.”

Given the change in party control of the Virginia state House and governor’s office, the NFIB plans to advocate for the state to freeze its minimum wage at $11 after that rate takes effect Jan. 1, Goodrich said.

He acknowledged many businesses already have raised wages to attract workers in response to a tight labor market, in many cases offering starting pay that matches or exceeds the minimum wages they’ll be required to pay next year.

“The market is definitely driving that right now, which is a point we have always made on minimum wage, that the market should determine it,” Goodrich said.

To contact the reporters on this story: at rrainey@bloombergindustry.com; in Atlanta at cmarr@bloomberglaw.com