Unaccompanied teenage migrants board a U.S. Border Patrol transport van to a processing center after they crossed the Rio Grande from Mexico on August 14, 2021 in Roma, Texas.
Photo: John Moore/Getty Images

News that the federal government may have released teenage migrants to labor traffickers has triggered memories of similar incidents in the past, and drawn attention to recommendations that went unfulfilled.

A lengthy bipartisan congressional probe of the Ohio case, sweeping policy recommendations from outside groups, and new screening protocols were all intended to prevent a federal agency from ever again releasing unaccompanied children into the hands of labor traffickers. Yet the new investigations, some of which appear to involve dozens of children sent to the same government-approved sponsor, suggest those efforts fell short. 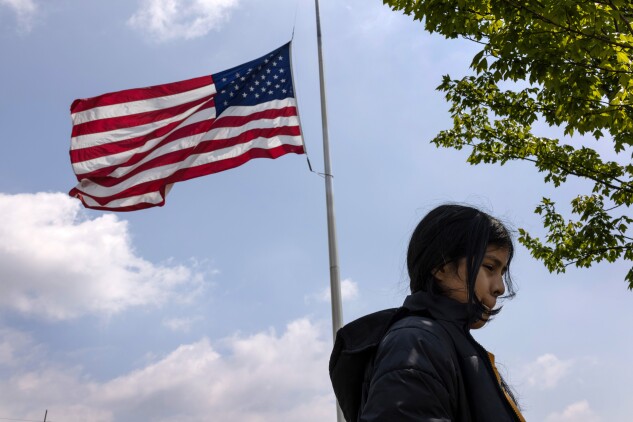 Honduran immigrant Nani, 10, visits a park on April 25, 2021, in Jeffersonville, Ind. She had joined extended family in Indiana two days before, following her release from U.S. Health and Human Services custody as an unaccompanied minor after spending nearly eight weeks in shelters.

Amid outrage and demands for answers from members of Congress, much remains unknown about the current investigations. The agency charged with caring for the children after they were detained at the southern border, the Health and Human Services Department’s Office of Refugee Resettlement, hasn’t responded to numerous requests for comment.

“Until the government takes steps to address the underlying problems, this is going to be something that repeats itself,” said Jessica Ramos, a senior attorney with Legal Aid Society of Greater Cincinnati.

Ramos said she no longer contacts the refugee office when she comes across a client she believes is a trafficking victim after multiple previous attempts to get the agency involved were fruitless.

HHS’s refugee office must balance the need to quickly move minors out of often-overcrowded shelters, while also vetting the sponsors who will take over their custody. Its workload has grown this year as a record number of unaccompanied migrant children arrived at the border.

Organizations that assist asylum-seeking youth argue that while the government should closely screen adults before releasing unaccompanied minors into their care, the real solution lies in expanding legal aid and social welfare services to protect these children after they’re connected with a caregiver, particularly when it’s not a family member.

“Once folks are released, what we see is that there’s a huge drop-off in the oversight that is provided,” said Jean Bruggeman, executive director of Freedom Network USA, an organization that works to combat human trafficking.

“We need to provide those follow-on services—every time for every kid,” Bruggeman added, saying that greater involvement by case workers and attorneys could make a difference.

Instead, the government delivered follow-up services to 18.7% of unaccompanied children who were transferred to sponsors, according to HHS data from fiscal 2019, the most recent available. Only those deemed most vulnerable receive such services.

The Government Accountability Office identified in a 2016 report that the refugee agency lacked a reliable system for collecting accurate and accessible data about its efforts to track the status of youths who receive post-release services.

The watchdog recommended that the refugee office improve its information collection process. Yet it determined in October 2020 that the office still hadn’t taken corrective action nearly five years after the initial report, said Kathryn Larin, who directs GAO’s oversight on this issue.

The refugee office told GAO last fall that its plan to address the data collection issues—installing a new case management system—had been postponed until January 2021. That new software still hadn’t launched as of early September, two sources with direct knowledge of the situation told Bloomberg Law.

“If you’re going to put a system in place to provide services to those children, having good information about who is getting the services, what services are they getting, is an important accountability measure,” Larin said in an interview.

The lack of quality data can “absolutely” increase unaccompanied teenagers’ risk of falling through the cracks and potentially being trafficked for their labor, Larin said. “Without that information, you just don’t know what’s happening with the kids.”

The Ohio case prompted the Senate Homeland Security and Governmental Affairs Committee to produce a series of bipartisan reports on weaknesses in HHS’s system for vetting sponsors and ensuring adequate care for minors after release.

The agency tightened its background check processes in 2016 and finalized a coordination agreement with the Department of Homeland Security in 2018. But major deficiencies persist in HHS’s system.

Senate investigators who worked on the reports told Bloomberg Government their most important recommendation has gone ignored: for HHS to accept ongoing responsibility for all unaccompanied children’s welfare after release to non-parental sponsors.

The Senate aides contend federal law already requires that approach by mandating government care of unaccompanied children. HHS officials have argued that children are no longer deemed unaccompanied once they’re placed with a responsible adult.

Mark Greenberg, who served in the Obama administration as acting assistant secretary of the agency that includes the refugee office, HHS’s Administration for Children and Families, recalled debating with lawmakers about how much authority HHS has to care for children after release.

“We wanted to provide services after children left care, but we just didn’t have the ability to simply terminate sponsorships and remove children,” he said. “That’s still the case now.”

There’s far more legal certainty that HHS at least has the power to expand in-person, post-release counseling, which advocates say would embolden minors to resist traffickers’ attempts to coerce them into hazardous work conditions.

But due to a combination of financial and practical limitations, the agency still only invests in these services when children are placed in the highest category of risk.

The Biden administration wants to expand the agency’s capacity commensurate with the increase in children arriving at the border; it has requested a nearly $2 billion surge in spending on the unaccompanied children program for fiscal 2022 compared with 2021. House Democrats are advancing an appropriations bill that would lift the portion of program dollars that are spent on post-release services to $300 million in fiscal 2022, an increase of $88 million.

Lawmakers are also pushing bipartisan bills, such as from Sen. (R-Ohio), which would tighten sponsor vetting and expand post-release services.

In 2014 and 2015, the agency expanded its checks for child abuse and neglect, created a hotline for children and sponsors, and expanded home studies to include all cases involving non-family-member applicants seeking to sponsor multiple children, said Greenberg, now at the Migration Policy Institute. In 2016, HHS began requiring all adults in a sponsor’s household to undergo background checks.

The Biden administration has since narrowed the policy, waiving background check requirements in most cases involving a sponsor who is a close relative or parent of the minor.

“It does speed the release process, but it raises concern when criminal records checks and sex offender registry checks are no longer being done for other adults in the home in a large share of cases,” Greenberg said.

The Biden administration also eliminated a Trump-era policy that a Senate report said may have improved children’s safety but also likely deterred would-be sponsors from stepping forward to care for children. The 2018 directive required HHS and U.S. Immigration and Customs Enforcement to share information about the immigration status of sponsors and all adults in their households, and required ICE to conduct background checks and run fingerprints.

HHS and DHS scrapped the agreement earlier this year, saying it had a “chilling effect” on uniting children with potential sponsors, including parents and other family members. The updated memorandum of agreement doesn’t outline a role for ICE in the vetting process.

The latest revelations of the government’s trafficking investigations may now swing the pendulum back in the direction of tighter sponsor screens, but also could spur greater post-release focus.

“They absolutely have a responsibility to do as thorough of a check as possible; but because they can’t account for any future danger, what they can do is check in on the kid,” said Jennifer Podkul, vice president for policy and advocacy at Kids in Need of Defense. “That’s where I feel like there’s been deficiencies.”