A father lures his child along with an iPhone during warmups before babies race in the NYC Triathlon's annual Diaper Derby, July 14, 2017, in New York City.
DOMINICK REUTER/AFP/Getty Images

This was the year paid parental leave benefits were expanded by employers to include all workers. Yet companies are still trying to figure out how to get new fathers to take the time off, as men’s use of parental leave lags behind women’s.

But men take less leave, on average. According to the Society for Human Resource Management’s 2017 employee benefits survey, 66 percent of women take all available paid maternity leave, while only 36 percent of men use all of their paternity leave.

Moreover, 40 percent of male employees used less than half of the paid parental or family leave they had available, compared with 13 percent of female employees, SHRM found. 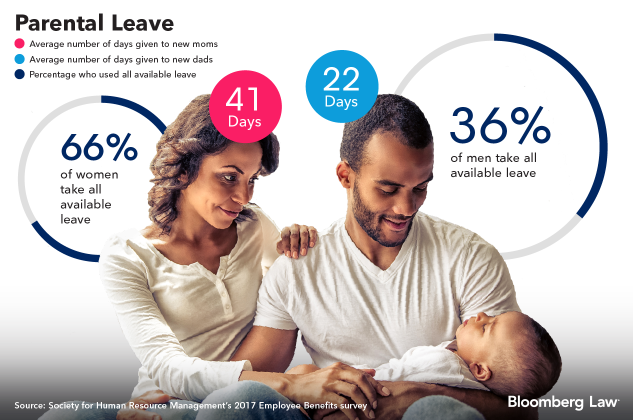 Sartor said the bar is shifting, though. “The leading companies on parental leave are not simply providing equal leave to all parents of an adequate length. They are launching initiatives to make sure that everyone is taking the full amount of leave, and they’re focusing those initiatives on men.”

Research shows that an inadequate balance between home and work can lead to burnout and lower productivity and morale. But those aren’t the only dangers lurking if workers aren’t taking the time off they need and are entitled to.

Giving new dads equal leave, and encouraging them to take it, also can protect companies against lawsuits. and all have been accused this year of discriminating against men who requested leave.

Estée Lauder settled a lawsuit with the Equal Employment Opportunity Commission for $1.1 million in July when the agency argued that by providing longer leave for primary caregivers than for secondary ones, and allowing for different return-to-work policies, Estée Lauder engaged in sex discrimination.

The American Civil Liberties Union filed a complaint with the EEOC on behalf of an employee with JP Morgan Chase when the company denied him primary caregiver leave because his wife was assumed to have that role.

EY and Viacom both were hit with lawsuits in April alleging they discriminated against new dads for requesting or using federally protected family leave. The EY case has since been sent to arbitration, while a decision in the Viacom case is still pending.

When men aren’t taking parental leave, the problem can often be one of workplace culture. “It’s one thing to be grabbing a headline with a benefit offering, but the culture may not align with the buzz that’s created,” Jason Russell, head of Total Rewards for software solutions provider SAP North America, told Bloomberg Law. If the policy and the culture don’t align, “then you destroy employee engagement and it does the exact opposite of what you intended to do in the first place.”

New parents at SAP North America receive six weeks of paid parental leave, whether for the birth, adoption, or fostering of a child. SAP leadership has focused on making sure parental leave is something employees are empowered to take, and that has been key in getting new dads out of the office, Russell said. Close to 90 percent of men at the company take an average of four or five weeks of parental leave. In addition, the company offers flexible work polices so employees can tailor their leave plan to fit their needs.

Messages that discourage leave-taking can be sent even when a company thinks it’s encouraging it, such as defining types of leave by “primary” or “secondary” caregivers, Sartor said. “Those policies send a clear message to men, which is that you are a secondary parent and you don’t need as much time. It takes a lot for a man to walk into an HR office and ask to be considered to be a primary caregiver.”

Generational differences may also play into why some employees take leave and others don’t, Dan Healey, head of HR for SAP North America, told Bloomberg Law. When Healey’s first child was born, he took just a couple of days off “because I just didn’t consider it.” Today, “my millennial colleagues are taking their full leave, and we’re learning that it’s really important for working dads to take advantage of their leave.”