At least 20 labor contracts at hotel brands including , , and expired Nov. 30, according to Bloomberg Law data. If workers at those hotels decide to strike, at least 6,225 people could be picketing on the streets of L.A.

An official for UNITE HERE Local 11 said employers should be able to give workers a better deal. “L.A. has one of the highest costs of living in the country, and our booming tourism industry can afford to pay its workers a living wage,” local Co-President Kurt Peterson said in a written statement.

Marriott responded to a request for comment by issuing the same statement that was previously distributed.

“Through many years of working with Unite Here, we have always taken the negotiation process seriously and reached agreements,” Marriott spokesperson Hunter Hardinge told Bloomberg Law in an email statement. “We respect the right of our associates to voice their opinions on issues that are important to them. Should the union and our employees choose to strike, our hotels will continue to operate and work to minimize any disruption.” 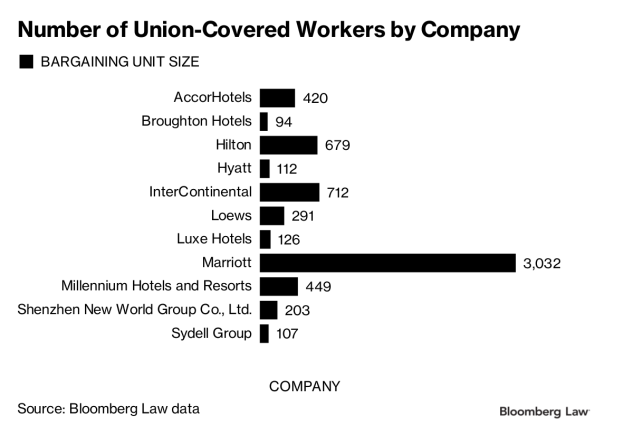 The strike authorization vote comes at the end of a record year for hospitality strikes. At least 20 work stoppages have occurred over the course of 2018, the highest number in at least two decades.

Hospitality workers in Los Angeles are asking for a $25 minimum wage. Other UNITE HERE labor contracts across the country guarantee more than that. 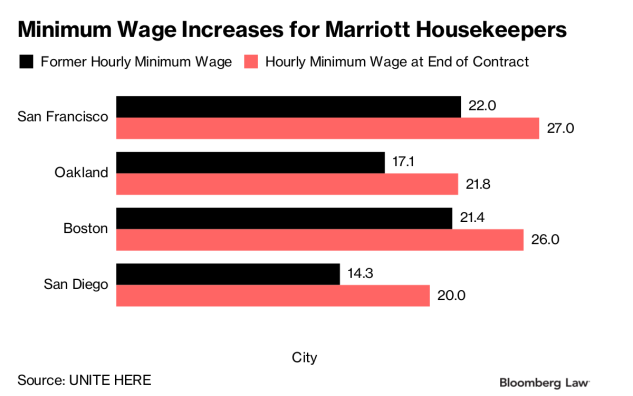 Housekeepers in Boston will also make more than $25 by the end of their contract. They previously earned $21.45, and will see pay jump to “close to $26" by the conclusion of the contract, UNITE HERE’s Boston Local President Brian Lang told Bloomberg Law.