The Biden administration’s plan to expand emergency federal leave during the Covid-19 pandemic includes the nation’s largest companies, widening the pool of employers that can be sued if they refuse to grant worker requests to recover from the virus, care for family members, or deal with school and childcare closures.

The plan announced Thursday would revive and strengthen the Families First Coronavirus Response Act, the nation’s first federal paid leave law that went into effect last year to curb the spread of the coronavirus.

Its leave requirements, which lapsed on Dec. 31, were criticized by worker advocates for excluding companies with more than 500 workers, such as nationwide retailers, grocery chains, manufacturers, and food processors that employ frontline workers.

Major retailers surveyed by Bloomberg Law, including and , say they’ve voluntarily increased the amount of paid leave provided to workers if they contract the virus. announced that it adjusted its attendance policy, as well.

“Clearly, this is a game-changer, as it would mandate paid leave for virtually all American workers,” said Littler Mendelson shareholder Jeff Nowak, who advises employers on leave policies and litigation. “Many of these large employers already provide these leave programs to their employees, but the fact that the incoming administration is prioritizing paid leave signals that permanent paid leave at the federal level may very well be in play in the upcoming years.”

If enacted, Biden’s measure would extend benefits to 106 million more workers. It could also lead to more FFCRA lawsuits—a consequence that business representatives have warned would happen, though an onslaught of litigation has yet to come to fruition.

As of March 2020, before the pandemic took hold in the U.S., just 20% of private-sector workers had access to paid family leave, according to recent data from the Bureau of Labor Statistics. Emergency paid leave could prevent more than 400 Covid-19 cases per day per state, and more than 15,000 cases per day nationwide, according to Health Affairs, a nonprofit organization with a focus on health-care workers.

The Biden plan would provide workers the right to up to 14 weeks of emergency paid sick and family and medical leave for Covid-related purposes, an increase from 12 weeks. It also includes clarifications that health-care workers will have access to benefits, and includes continued reimbursement for businesses with fewer than 500 employees and state and local governments, through September 2021.

The FFCRA previously included exemptions for small employers, defined as having less than 50 workers, that could show providing the leave would harm the viability of their businesses. The incoming administration said it would eliminate this exception. 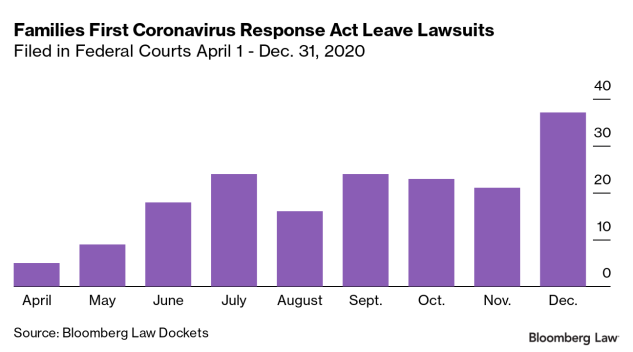 Employers have said the FFCRA provisions were difficult to navigate and burdensome, particularly as they felt economic stress and pressure to find workers amid the pandemic.

Forcing large employers to provide paid leave without a refundable tax credit will be a burden for some employers, Marc Freedman, vice president of workplace policy at the U.S. Chamber of Commerce, said in a statement.

“Not all employers above 500 employees are large national companies with robust self funded paid leave benefits,” Freedman said. “Similarly, there should be some allowance for those companies with strong paid leave programs to satisfy the federal requirement through their current programs and not have to tack on a federal benefit on top of what they’re already providing.”

A Bloomberg Law analysis found 177 coronavirus-leave lawsuits brought in federal courts last year from April 1 through Dec. 31, with a slight spike in December following a three-month downward trend. The cases were filed by largely by blue-collar workers such as mechanics, waiters, and landscapers, but also some medical and office workers.

The vast majority of those filing FFCRA suits alleged their employers unlawfully terminated them after they contracted Covid-19 or sought medical treatment when they had symptoms, needed to care for someone who was quarantining, or lacked school or child-care options. A small handful said they did receive leave, but claimed it was unpaid.

Workers’ advocates praised the Biden administration’s plan. Lack of paid leave has been targeted as a reason for persistent gender and racial wage gaps in the U.S. Advocates have said the economic and public health effects of the coronavirus should be a signal for the need for a permanent solution.

Women, who disproportionately take up caregiving duties, have felt an unequal brunt of the economic pains of the pandemic, with female workers making up the largest share of the unemployment figures in recent months, according to the National Women’s Law Center. In December, 100% of the jobs lost were women’s.

“It will help businesses open, workers get vaccinated, and get kids back to school—while ensuring that those who are sick can isolate to keep others safe and speed their own recovery and that those who need to care for loved ones will not lose their jobs or jeopardize their families’ ability to meet basic expenses,” said Vicki Shabo, a senior fellow for paid leave policy and strategy at New America, a think tank in Washington.

(Updated with additional comments in fifth, 11th, and 12th paragraphs.)