Women lawyers have been aware of implicit bias and sexual harassment in the legal profession for decades but have found it difficult to speak out en masse.

A Twitter handle is helping them do just that. @LadyLawyerDiary was created in early 2018 by women lawyers to discuss “the universe of things women deal with” in the legal profession, Kendyl T. Hanks told Bloomberg Law. Hanks is an attorney with Greenberg Traurig in Austin.

This includes overt sexual harassment but also the many instances of subtle, systemic injustice in the profession, such as pay differential between men and women and unconscious bias. Women are, for instance, more often delegated menial tasks such as organizing social events, Rachel I. Gurvich told Bloomberg Law. Gurvich is a professor at the University of North Carolina School of Law.

There haven’t been as many revelations about misconduct in the legal profession as there have been in other industries like entertainment and sports, but that is likely because law firms have been slower to deal with the issue in a public way.

@LadyLawyerDiary is lifting the veil on what has been going on for years in the legal industry by bringing “a collective of different voices together” to address problems women face, Gurvich said.

Hanks gives credit to the #metoo movement for creating the momentum for the handle. “If LadyLawyerDiaries started five years ago, there wouldn’t have been as much enthusiasm from followers as there is now,” Hanks said. The #metoo movement has shined a light on sexual harassment in the workplace.

Gurvich and Hanks are two of about 15 attorneys who contribute in a personal capacity to managing the handle, which describes itself as a “forum celebrating and promoting women in the law and their war stories. And occasionally outing stupid sexist stuff.”

The handle started out as a hashtag on Twitter in 2017, “to call out” sexist behavior on Twitter and elsewhere, an attorney who contributes to it told Bloomberg Law.

LadyLawyerDiaries tweeted for the first time in January 2018. By then, people had begun to use the hashtag to note the professional achievements of women, Ellie Margolis told Bloomberg Law. Margolis is a professor at Temple University’s Beasley School of Law. She is also a contributor to the handle. 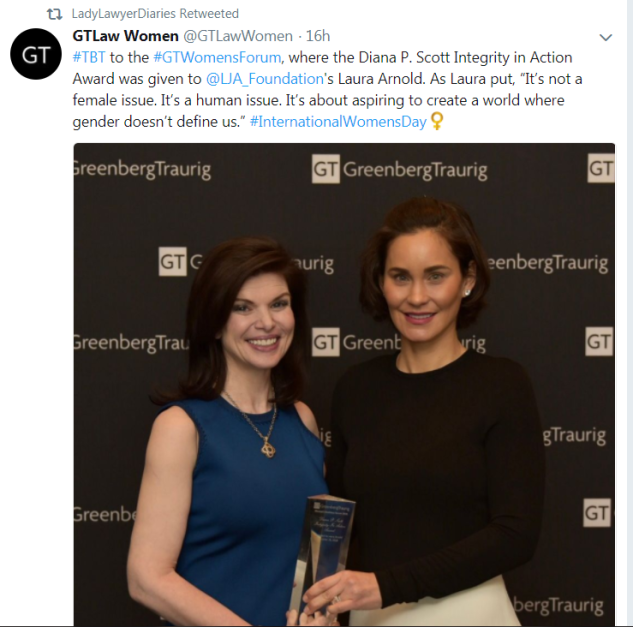 “It’s taken off into what is a wonderful community of women lawyers” who support one another professionally and personally. “There’s clearly a lot of appetite for” it, she said. The handle now has over 1500 followers.

Katherine M. Larkin-Wong, an attorney with Latham & Watkins in San Francisco who follows the handle, agrees that its primary function now is to tout women lawyers’ successes.

It started out more as a version of #metoo but it’s grown into something “that’s so much more than that” and it’s exciting, Larkin-Wong said.

They help corroborate women’s stories, which makes complaints about harassment or bias “a less gendered issue” and more about professional conduct, she said.

It’s “much easier to dismiss inappropriate behavior as a woman being too sensitive if it’s only a woman saying it’s inappropriate,” Hanks said.

It’s “just as important” to have men listen to the stories so they can learn, Gurvich said.

We’ve had a lot of comments along the lines of “I had no idea” when an instance of workplace sexism was discussed, Gurvich said. “Our male counterparts have had some great comments and offered support” and “it’s been a huge asset,” she said.

Robert S. Rosborough IV became involved because a lot of the women contributing to it were attorneys he interacted with on Twitter and he felt that it shouldn’t just be up to women lawyers “to shoulder the burden” of the issues they’re addressing, he said.

Rosborough is an attorney with Whiteman Osterman & Hanna LLP in Albany, New York, who follows @LadyLawyerDiary.

“It’s our responsibility as men to do what we can to make the law a more equal endeavor,” Rosborough said.

Men have an obligation when they see another man acting in a sexist manner to stand up and say it’s not okay, he said.

LadyLawerDiaries “brings to the fore real issues the law has faced for a long time but hasn’t really been pressured to address,” Rosborough said.

Some women are still afraid to speak out because of the effect it could have on their careers, so @LadyLawyerDiary allows people who feel uncomfortable to contribute anonymously.

Those wishing to do so can direct message the handle; those in charge then tweet on their behalf, Hanks said.

“I’m really proud of women who do it on their own but we recognize that there are legitimate concerns for women who have a need to be heard,” Hanks said.

One of the handle’s anonymous tweeters posted a survey in March on salary negotiations for women lawyers. “Women lawyers make less than their male colleagues,” the tweet begins. 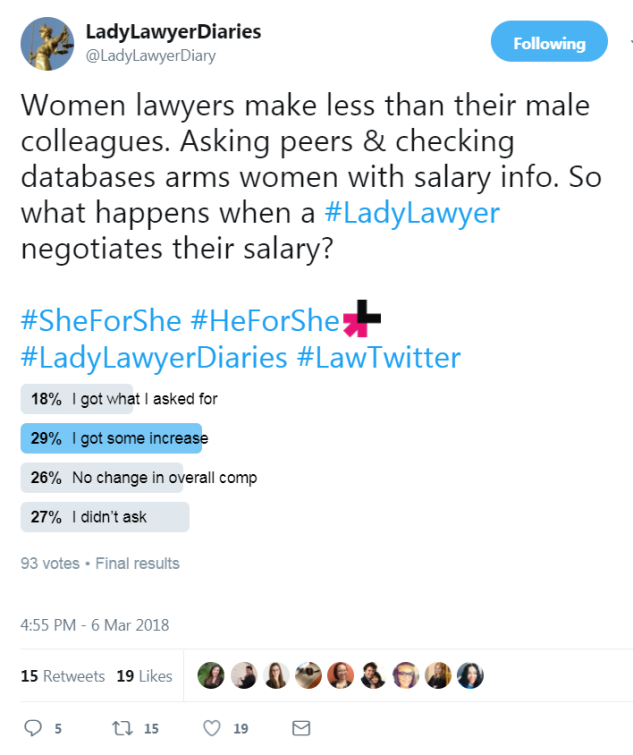 Reports back up this statement: There is a gender pay gap in the legal profession. The most recent American Bar Association report on women in law reported that “the typical female equity partner in the 200 largest firms earns 80% of the compensation earned by the typical male partner.”

Compensation and issues relating to pay are often fraught for women, and they often have more difficulty negotiating pay raises, promotions, and benefits than men, Gurvich said.

The idea behind the survey was to initiate a discussion and have women offer tips on how to ask for a raise, she said.

The pay differential and difficulties in advancement are “perpetual frustrations” for women lawyers, Gurvich said. But she hopes the forum LadyLawyerDiaries provides will help women feel supported and able to speak more openly in the future.

To contact the reporter on this story: Melissa Heelan Stanzione in Washington at mstanzione@bloomberglaw.com