Boston Mayor Marty Walsh’s selection for labor secretary excites unions due to his organized labor roots, but his rise in politics demonstrates a knack for finding common ground with constituencies beyond his blue-collar base, including employers.

The two-term Democratic mayor’s origins as a Boston construction-union leader, friendship with President-elect , and history of advocating for working families as a state legislator helped make him Biden’s choice to helm the U.S. Labor Department. Yet Walsh’s personal background and governance style are also strikingly similar to the deal-making consensus-builder who could soon be his boss.

“He’s sort of Joe Biden-esque—'We bring the actors to the table and we assume good will,’” said Erin O’Brien, a political science professor at the University of Massachusetts Boston. “But much like Joe Biden, that orientation has cost him on the left. That stems directly from he’s a do-the-work, bring-everyone-to-the table, compromise kind of guy.”

Walsh’s track record in Boston’s construction-union community and in state and city politics will assume weighty implications for the national workplace agenda, if he’s confirmed. As labor secretary, he’d be at the center of the incoming administration’s commitment to strengthening the federal government’s response to the Covid-19 pandemic, including tougher worker protection standards, renewed paid family-leave benefits, and expanded access to unemployment insurance.

When Walsh arrived at Boston City Hall as a newly elected mayor in 2014, he was fresh off a stint as head of the Boston Building and Construction Trades Council, an umbrella organization of 20 local unions. The city’s business community feared he’d be beholden to union interests and demand that all development projects be built with union labor, recalled Jim Grosso, a veteran attorney for Massachusetts real-estate developers.

To the contrary, industry groups soon observed Walsh was committed to streamlining the Boston development agency to make it simpler for companies to get projects approved, while also focusing on affordable housing and reducing the city’s carbon footprint, said Grosso, who’s negotiated several major projects opposite Walsh.

“So he turned out to be more than a labor leader,” Grosso added. “After a year, the private sector realized he wasn’t going to be pro-labor to their detriment.”

In a way, Walsh has made a career of defying expectations. He doesn’t have an overarching political ideology that fits squarely in any one box. Instead, as mayor he adapted to the times to remain politically relevant as the Democratic Party skewed more liberal in the 21st century, Boston political observers said.

“He’s sort of a hybrid. In some ways he’s a very old-fashioned labor Democrat: working class, came up through the labor movement,” said David Hopkins, a political science professor at Boston College. “But he’s also someone who has adapted to the liberal character of the Democratic Party today. He’s a progressive on all the major cultural issues.”

For instance, despite hailing from the building trades—which represent predominantly White, male workers, including many supporters of President —Walsh has championed progressive causes that placed him at odds with some construction union members. That includes supporting same-sex marriage and climate change action in addition to creating an apprenticeship program that delivered more opportunities for people of color and women.

“He’s been able to maintain relevance by not abandoning his core beliefs when it comes to labor, but also by being able to evolve and be an ally—whether it’s Black Lives Matter or the LGBT community or whether it’s new Americans, he’s managed to build bridges in many places,” said Mike Ross, the former Boston City Council president, who ran for mayor against Walsh unsuccessfully in 2013.

That hasn’t lost Walsh any backing in the union halls in his Dorchester neighborhood, where the mayor lives with his longtime girlfriend.

“Marty’s a different animal. He’s got a union ticket in his pocket,” said Bobby Butler, a business manager for Sheet Metal Workers Local 17 in Dorchester. “Not everybody’s going to agree with Marty’s policies, but at the end of the day they know he’s got the best interest of organized labor at heart.”

Union membership aside, Walsh’s personal journey has also won him support from across the aisle. He overcame cancer as a child and alcoholism as a young adult—experiences that he’s prone to reference in speeches.

“I often half-jokingly refer to Marty Walsh as like a Swiss Army knife,” said John Tobin, a Walsh friend and administrator at Northeastern University. “The mayor checks a lot of boxes and appeals to a lot of different constituencies: He’s in recovery, he’s a cancer survivor, he was shot, his family’s from Ireland.”

The gunshot came after a late-night of drinking when Walsh was 22 years-old. He and two friends were each hit in the leg when the gunman opened fire after a bar fight with another of Walsh’s friends, according to a 2016 Boston Magazine profile. Their injuries were not serious.

Walsh had been scheduled to face off against two challengers in his bid for a third term as mayor this November. The two challengers—both Boston City Council members and women of color—are running to Walsh’s left, calling for a more liberal city administration. He’s also been criticized for not doing enough to address racial inequality following the police killing of George Floyd in Minneapolis. 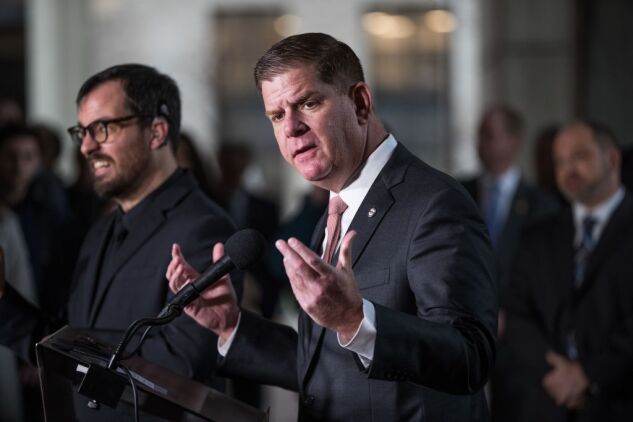 In Washington, Walsh’s embrace of progressive causes likely won’t be enough to satisfy all Democrats, given that Biden had been pressured to pick a woman or a person of color for labor secretary. Yet in that regard, he also mirrors the president-elect’s status as a centrist figure who can frustrate Democrats to his left.

But Walsh’s time in Boston demonstrates that he would be a strong union advocate in Biden’s Cabinet, something labor leaders hope could help them reverse decades of weakening clout.

And as endorsements from the heads of two powerful unions for teachers and public sector employees attest, Walsh has built relationships in organized labor factions outside of the building trades.

Ed Kelly, the general secretary-treasurer of the International Association of Fire Fighters, said that during Walsh’s 17-year tenure as a state representative, he proved pivotal in fighting for public employees.

Coming out of the Great Recession in 2011, Walsh led the battle in the state assembly to avoid the erosion of public sector union bargaining rights for health-care coverage, Kelly said.

“I can’t stress enough how every single facet of the Massachusetts labor movement leaned on Marty in the state house for everything,” added Kelly, who is now running to replace the Fire Fighters’ retiring president, Harold Schaitberger.

Walsh’s pragmatic, unity-seeking reputation will likely be tested as he heads to Washington to prepare for the Senate confirmation process—always a politically fraught affair, even with Democrats poised to have the slimmest of majorities.

Walsh could be confirmed by a simple majority vote that wouldn’t require backing from a single Republican senator. Still, his confirmation hearing will provide an opportunity for lawmakers to vet his record in ways that Republicans could use to try to sink his nomination.

One area ripe for scrutiny is a scandal that led two former advisers to the mayor to face federal criminal corruption charges for allegedly extorting a Boston music festival operator into hiring union labor. A federal judge found both aides not guilty in February, overturning a jury’s guilty verdict.

Walsh testified before a grand jury on the matter but was not charged personally. That episode of Walsh’s mayoral tenure could certainly be weaponized against him during the hearing, but “it’s fairly small potatoes,” said O’Brien, the UMass-Boston professor.

“Many Republicans when they look at Marty Walsh, I think, would like him,” she added. “It’s not unheard of to have some in Boston vote for Donald Trump and vote for Marty Walsh, and their political philosophies could not be more different.”