The Labor Department collected more than $27 million from federal contractors like and in fiscal year 2019 workplace discrimination settlements—a new record for the agency.

Settlement totals, which include back pay and interest for job applicants and workers, jumped by more than 65% compared to the previous fiscal year’s $16 million, according to a Bloomberg Law analysis. The prior high for the DOL’s Office of Federal Contract Compliance Programs was almost $24 million in fiscal 2017.

More settlements may become publicly available for FY19 in the coming weeks.

The agency didn’t respond to a request for comment. 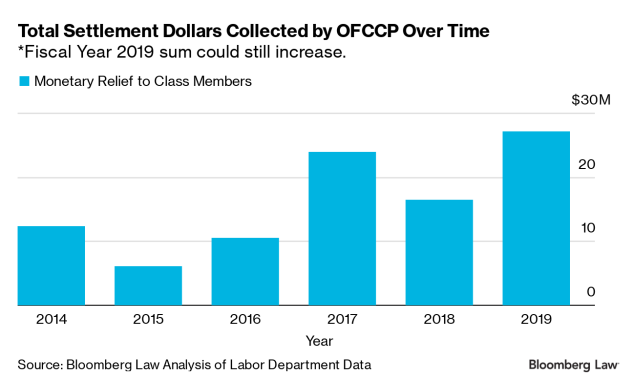 Several multimillion-dollar settlements were reached on Sept. 30, the last day of the fiscal year.

Goldman Sachs agreed to pay almost $10 million to settle allegations of pay discrimination at the bank’s New York headquarters. More than 600 workers could benefit from the settlement.

Dell Technologies will pay $7 million to a class of potentially 5,475 workers to resolve pay bias claims at 20 of the tech company’s locations. More than $1.5 million of the $7 million already has been paid, as part of a 2012 OFCCP settlement with EMC Corp. Dell and EMC. Corp. merged in 2016.

Bank of America also settled claims of race- and sex-based hiring discrimination at locations in four states, and will pay $4.2 million.

Though they reached settlements during the Trump administration, Goldman Sachs and Bank of America were audited during the Obama administration, based on the time range the OFCCP says discrimination occurred. The pay bias at Goldman Sachs allegedly occurred between January 2011 and December 2012, and the hiring discrimination at Bank of America’s multiple locations allegedly occurred during various periods between 2008 and 2013.

All three settlements were “enhanced compliance agreements,” which stipulate routine compliance monitoring for all of a corporation’s locations, in exchange for five years free of random OFCCP audits.

The agency enforces anti-discrimination protections based on race, sex, color, national origin, religion, sexual orientation, gender identity, disability, and veteran status. However, enhanced compliance agreements require contractors to report employment data only related to a specific alleged violation, which could be, for example, race-based hiring discrimination. Under that requirement, other areas of potential bias, such as pay, won’t be subject to monitoring.

Attorneys who have worked on these deals for employers said that a lighter touch is better than no touch at all, and the enhanced compliance agreements bring more establishments under OFCCP review. The OFCCP currently audits about 2% of U.S. contractor locations each year.

The agency is still litigating discrimination claims against contractors like Oracle, JPMorgan Chase & Co., and the Teachers Insurance & Annuity Association of America.

The companies are defending themselves against pay discrimination allegations. Oracle and JPMorgan Chase & Co. were sued at the end of the Obama administration, and the TIAA complaint was filed Aug. 30, according to a DOL spokesperson. That case also stemmed from an Obama-era audit.

These disputes could potentially end in settlements down the line.