The collapse of talks on Democrats’ tax and social spending legislation has put labor-focused agencies in a difficult position—they face increased enforcement demands under the Biden agenda but can’t bank on an infusion of extra cash to support those efforts.

The House-passed version of the Build Back Better Act—now in need of a political resurrection after moderate Democratic Sen. (D-W.Va.) balked at supporting it—would’ve spread $2.117 billion in additional enforcement funding between the U.S. Department of Labor, U.S. Equal Employment Opportunity Commission, and the National Labor Relations Board.

The funding would grease the wheels of the Biden administration’s labor agenda, which aims at stricter enforcement of federal labor and employment laws. That cash would allow for the hiring of waves of new investigators to rebuild agencies’ enforcement ranks following Trump-era attrition. It also would give the DOL and other agencies more bandwidth to meet increased enforcement demands associated with pandemic response and the coming boom in federal contracts under the $1 trillion infrastructure law (Public Law 117-58).

“This would be a significant expansion of capacity to each of these agencies to deal with regulations and to deal with enforcement,” said Robert Duston, a partner at Saul Ewing Arnstein & Lehr LLP.

Some attorneys, lawmakers, and former agency staffers said in interviews that if the social spending bill can’t be resurrected—or a slimmed-down version emerges that drops the enforcement funding—the administration will have lost a rare opportunity to bolster historically cash-strapped agencies outside of the regular appropriations process.

“Annual appropriations cannot keep up,” Duston added. “They are a status quo, not an expansion of resources.” 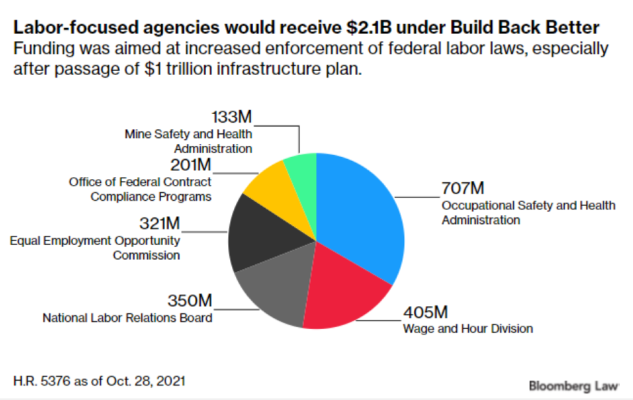 The administration already has made several moves to reorient labor agencies toward greater enforcement to support workers, and the DOL and NLRB recently finalized an agreement to team up on efforts to root out retaliation and misclassification of workers as independent contractors and to police joint employer relationships.

But if the agencies don’t receive that funding, “They’ll say, ‘You sent us this grand agenda and you didn’t give us the money to pay for it,’” said James Paretti, a shareholder with Littler Mendelson P.C. who was chief of staff to Victoria Lipnic when she was a Republican EEOC commissioner.

For example, it would take OSHA 161 years under its current budget to inspect every U.S. workplace, according to Rep. (D-Va.), chair of the House Education and Labor Committee. The agency, which is on the front lines of pandemic response, would get $707 million under the legislation. To put that extra sum into perspective, OSHA’s total budget for fiscal year 2021 was $591.2 million.

“When it comes to enforcing workers’ rights, you get what you pay for,” Scott said in a statement. “We cannot expect OSHA, EEOC, and other agencies to protect workers with limited resources.”

However, DOL enforcement agencies did receive $200 million in extra cash under the American Rescue Plan Act of 2021 that can be used through fiscal 2023 to respond to the Covid-19 pandemic. The department spent more than $65 million of that in fiscal 2021 and has allocated a little over $96 million for the current fiscal year, according to the DOL’s website.

Enforcement funding from the Build Back Better Act is even more critical to President ‘s labor agenda because it is questionable whether Congress will be able to pass an appropriations bill for labor agencies anytime soon.

A stopgap bill gave appropriators until Feb. 18 to reach a spending deal, and some senators have threatened a continuing resolution that would cover the remainder of fiscal 2022, which ends Sept. 30. That outcome would mean agencies would be stuck with prior-year funding levels dating back to the Trump era for an extended period, perhaps even into the next fiscal cycle.

Scott said he “fully” expects Build Back Better’s worker-protection funding to be preserved, though he stopped short of predicting the bill will pass. Sen. , chair of the Senate labor panel, said she’s “working hard to get our labor agencies the resources they need—as part of the Build Back Better package, and in the budget proposal I’ve put forward.” 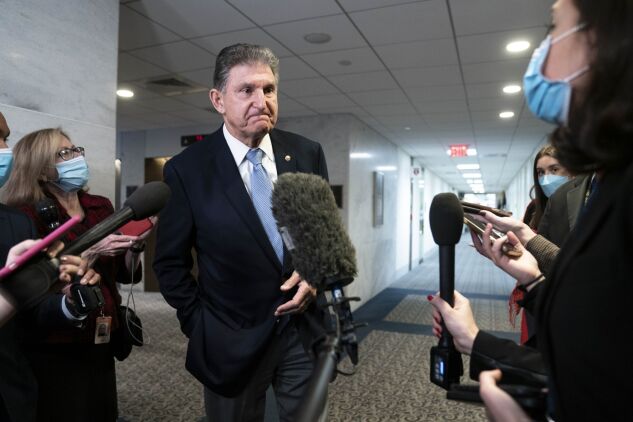 Sen. Joe Manchin (D-W.Va.) halted efforts to pass the tax and social spending bill through a budgetary process that would’ve required support from all Senate Democrats. Manchin had concerns about inflation and the package’s total cost.
Photographer: Sarah Silbiger/Bloomberg

“How do we make these protections real? Because we know that workplace protection laws are not real unless they’re enforced,” Walter said. “We have to be pursuing every avenue for funding these agencies—we are so far behind, and we have so much to do, and this is the perennial question.”

The additional funds proposed in the Build Back Better Act would help to increase enforcement efficiency in addition to providing more firepower to change policy.

“It really does take sort of boots on the ground; it makes a difference to have more personnel available to advance these initiatives,” said Justin Chiarodo, a government contracts attorney and partner at Blank Rome LLP.

The EEOC, for example, has long had delays in processing workplace civil rights complaints.

“They can linger six months or a year before an investigator gets to the file, so there are long delays that both employers and employees face in trying to get charges resolved,” Duston said, adding that delayed investigations lead to faded memories and unavailable witnesses.

The agency, which had a budget of $404.4 million in fiscal 2021, would receive an extra $321 million under Build Back Better. The funds would be used to address racial discrimination, pay equity, sexual harassment, and LGBTQ protections, along with a multi-agency effort to tackle worker misclassification, the EEOC said.

The NLRB would receive an additional $350 million under the Democrats’ plan, well above its fiscal 2021 level of $274 million. It intends to use the cash to fully staff field offices, upgrade technology, and expand outreach, said Chair (D).

“Fully funding the NLRB should be a priority for anyone who believes workers should freely choose if they want a union, quickly obtain the benefits of collective bargaining, and get effective redress when their workplace rights are violated,” McFerran said in a statement.

The DOL’s Wage and Hour Division, which polices prevailing wage requirements on federally funded construction projects and is developing important regulations—include on overtime pay—would get an additional $405 million. Its annual funding in fiscal 2021 was $246 million.

“We will continue to use the tools we have to allocate our resources most effectively,” a Labor Department spokesperson said.

The DOL’s government contractor watchdog, the Office of Federal Contract Compliance Programs, would get an extra $201 million in funding, nearly double its current funding level of $105.9 million.

OFCCP Director Jenny Yang said in a statement the funding would help the agency ensure equity for vulnerable workers and “ensure all workers have an opportunity to contribute their talents to our recovery.”

David Fortney, co-founder of Fortney & Scott LLC, a firm that counsels federal contractors on compliance matters, said the extra boost would allow Yang to reimagine how the agency should operate, including expanding training and hiring new expertise.