It’s now distancing itself from the Second Amendment, but hasn’t the world’s largest law firm been a major contributor to the proliferation of guns?

As dramatic exits go, Paul Clement’s departure from Kirkland & Ellis was a doozy. After scoring a landmark victory for gun rights in the Supreme Court last week, Clement and his partner Erin Murphy announced their departures from Kirkland—effective immediately.

A few hours later, they amplified that news, publishing an opinion piece, “The Law Firm That Got Tired of Winning,” in the Wall Street Journal that essentially scorched their former firm. Rather than receiving the customary “round of congratulatory messages from law-firm colleagues for a job well done, especially when we have helped our clients vindicate their fundamental constitutional rights,” they write, the firm presented them with an ultimatum: keep their controversial clients (namely, the National Rifle Association) or keep their jobs at Kirkland. They picked their clients.

Meanwhile, Kirkland chairman Jon Ballis was ready to parry, dashing off a statement calling Clement and Murphy “valued colleagues” and wishing them “the best of luck in the future.” To show there are no hard feelings, he added, “we look forward to collaborating with them in the future in matters not involving the Second Amendment.”

While Clement and Murphy were delivering a series of soliloquies about the dangers of cancel culture and the nobility of representing unpopular clients, the firm’s message was much more succinct: Kirkland is done with the unsavory business of advocating for gun rights.

It’s nice that Kirkland is now washing its hands of Second Amendment work, but I’m not sure what to make of its sudden change of heart. Did it finally dawn on the powers-that-be that promoting the NRA’s agenda might not be aligned with the values of its lawyers or the rest of America? Or was it just salvaging its reputation?

Should we be impressed or chagrined with its new leaf? 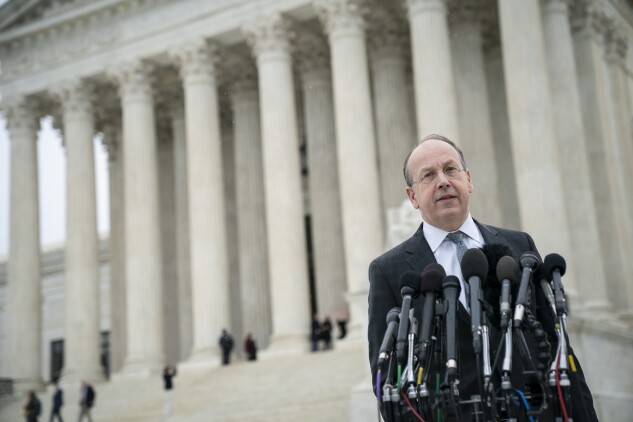 After being one of its fiercest and most effective advocates, Kirkland is now distancing itself from the gun lobby. It’s like all those Trump enablers testifying in the Jan. 6 hearings, who are now suddenly speaking truth to power.

As one of the NRA’s key lawyers (the other is Cooper & Kirk), Kirkland put its prestige and power behind Clement’s gun advocacy, culminating in a landmark ruling that greatly expands gun rights. In siding with the plaintiff, which is an affiliate of the NRA, in New York State Rifle & Pistol Association v. Bruen, the court overturned part of a 1911 New York law that required a gun owner to show a special need before being licensed to carry a concealed gun in public. Speaking as a New York City resident, I can tell you that the idea that the city will be filled with gun-toting citizens is terrifying.

Perhaps I should be more sympathetic to Kirkland’s predicament. After all, Clement’s win in Bruen must have been inconvenient, if not downright embarrassing, in the aftermath of the horrific mass shootings in Buffalo, New York, and Uvalde, Texas. I can’t imagine that Kirkland—the world’s largest law firm by revenue—would want to be remembered as the firm that brilliantly convinced the Supreme Court to open the floodgates to more guns in New York City and other densely populated cities. But there we are.

Here’s what intrigues me: How did such a super business-savvy firm like Kirkland get itself in the business of promoting the culture of guns in the first place? Most Big Law firms involved in Second Amendment work are arguing for the opposite side—advocating for gun control.

I contacted Kirkland’s chair Ballis, and a spokesperson replied that the firm would not be commenting.

It’s hard to believe that there was ever much of a business reason for Kirkland to retain the NRA as a client. “It’s not lucrative work; the NRA won’t get big damages,” said Duke Law School professor Joseph Blocher, who co-heads Duke’s Center for Firearms Law. “The money in gun litigation is on the torts side representing the gun industry.”

I can only surmise that Kirkland was captivated by Clement’s star power. A former US Solicitor General, Clement has argued before the Supreme Court more than 100 times. By most accounts, Clement is genuinely brilliant.

But Kirkland also knew the flip side of what it was getting. After all, Clement had similar tensions with his former firm King & Spalding, which he left in 2011 over his work on behalf of the Defense of Marriage Act, which defines marriage as an arrangement between a man and a woman.

Most likely, Kirkland decided that Clement was worth the potential turmoil and gave him carte blanche to pursue whatever his heart desired. That was the price of snagging a superstar. It was a great bargain for the firm. Until it wasn’t.

“Not everyone at the firm was aware of the NRA work until the latest mass shooting,” said a former Kirkland lawyer who expressed relief that the firm is finally being held accountable. Until recently, this lawyer commented, “people compartmentalized and didn’t confront the issue.”

But with the recent spate of mass shootings, coupled with Clement’s advocacy on the Bruen case, the pressure for Kirkland to drop the NRA escalated. A source told The Wall Street Journal, that the firm “started getting a lot of pressure post-Uvalde, hearing from several big-dollar clients that they were uncomfortable” and that “several partners agreed that they should drop that representation.”

All this is to say is that Kirkland’s gamble on Clement’s star wattage didn’t quite work out as planned. As much as I’d like to believe that it was a moral reckoning that tipped Kirkland’s hand, I have no doubt that it was largely a business calculus.