A customer shops for Mercedes-Benz automobiles at a car dealership.
Photographer: Hannelore Foerster/Bloomberg via Getty Images

The Labor Department was noticeably absent in the Supreme Court when lawyers argued over whether car service advisers are eligible for overtime.

The case: The U.S. Supreme Court heard arguments Jan. 17 in a case focused on whether car dealer employees who sell repair services are eligible for overtime when they work more than 40 hours in a week (Encino Motorcars LLC v. Navarro, U.S., No. 16-1362, oral argument 1/17/18).

Who isn’t involved: The Labor Department, which administers federal overtime law, didn’t present views either in an amicus brief or in oral argument, several justices and the lawyers arguing before the court observed. “If this isn’t a question for an agency, what is?” Justice Stephen Breyer asked. “The Solicitor General is not here in a case in which one would expect the government to be here,” Justice Elena Kagan said.

“I would expect that the absence of the Department of Labor may have something to do with the Department of Labor not sharing the Ninth Circuit’s view” that service advisers are eligible for overtime, Lisa “Lee” Schreter, co-chair of employer-side law firm Littler Mendelson, P.C.'s wage and hour practice group, told Bloomberg Law Jan. 17. “It’s not the first time that the department has been struggling with the prior administration’s view that they didn’t agree with,” Schreter said. Schreter is a shareholder in the firm’s Atlanta office and a contributor to Bloomberg BNA books on employment law.

The DOL didn’t immediately respond Jan. 17 to a request for comment on its absence sent after the oral argument. In response to a request for comment before the oral argument about why it’s sitting the case out, the DOL referred Bloomberg Law to a Jan. 5 bulletin in which Bryan Jarrett, acting administrator of the Wage and Hour Division, said it was reconsidering its position on service advisers’ overtime eligibility.

What workers want: Time-and-a-half pay when they work more than 40 hours in a week. The Fair Labor Standards Act requires premium pay unless an exemption applies.

What the employer wants: Dealer says exemption applies, so overtime isn’t owed. To support its argument, the dealer cited the FLSA’s description of “any salesman, partsman, or mechanic primarily engaged in selling or servicing automobiles, trucks, or farm implements, if he is employed by a nonmanufacturing establishment primarily engaged in the business of selling such vehicles or implements to ultimate purchasers.”

Déjà vu: The justices decided in 2016 that advisers might not be eligible for overtime, rejecting a Labor Department interpretation saying they were. (The justices said DOL’s interpretation wasn’t entitled to deference because the agency failed to explain the about-face in its decades old position.) The case went back to the U.S. Court of Appeals for the Ninth Circuit to be decided without reliance on the Labor Department’s interpretation. In January 2017, the Ninth Circuit again found that the service advisers didn’t qualify for the exemption—and thus were eligible for overtime—because they didn’t sell or service automobiles, even though they counted as salespeople because they sold services. The dealer appealed again, this time saying the court incorrectly interpreted the FLSA. 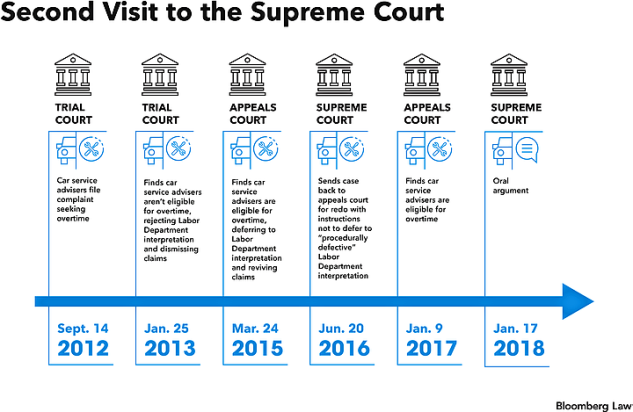 Why it matters: This could be a chance for the Supreme Court to refine rules for how courts construe the FLSA. The justices have held for decades that FLSA exemptions must be narrowly construed against the employer to make the FLSA reach as many employees as possible. It’s an employer’s duty to prove that an exemption applies. If it can’t, then the general rule that an employee is eligible for overtime takes over. In recent years, the high court has taken steps to clarify the rules, and this case could be an opportunity to further refine them.

Since the 2016 Supreme Court decision, federal agencies have cited Encino Motorcars v. Navarro in Federal Register notices when they’ve contemplated a change in regulatory posture, across a variety of topics from hydraulic fracturing to illegal modifications to semiautomatic weapons. The agencies cite the case as a way of acknowledging that they have to explain themselves when they change positions.

The arguments: The FLSA exemption’s use of the terms “primarily engaged in” expands the number of employees who qualify beyond just those who lift the hood to make repairs or go on the lot to sell cars, the dealer argues. An exemption that covers fewer people would have ditched the “primarily engaged in” language and been limited to an employee who “who primarily sells or services automobiles,” Encino says.

Various business associations, including the U.S. Chamber of Commerce, the National Federation of Independent Business, and the National Automobile Dealers Association, filed amicus briefs in support of the dealer.

The ruling: It’s hard to predict exactly when the Supreme Court might release its ruling, but the court typically finishes publishing a term’s decisions before it recesses for summer. The last time around, the court heard Encino Motorcars on April 20, 2016, and published its decision on June 20.