Lois Davis says her Texas county employer was too late to argue she didn’t ask federal or state authorities to investigate her religious discrimination allegations before suing. A federal appeals court agreed and revived her claims.

Federal law requires a worker to bring all discrimination claims to the Equal Employment Opportunity Commission or a similar state agency first before suing an employer. But courts disagree whether that requirement is an absolute must-do before a court even has jurisdiction to consider the employee’s claims or is a defense employers can lose by not raising it early enough.

If exhaustion of administrative remedies is a prerequisite for going to federal court, then an employer like Bend County, Texas, can raise the issue at any time—even on appeal—and potentially get a plaintiff’s claims dismissed. That’s because challenges to a court’s jurisdiction are generally nonwaivable.

On the other hand, if a worker needs to establish administrative exhaustion only as an element of a discrimination claim, an employer would typically have to raise the issue with the court at the first available opportunity or risk losing it as a defense.

The exhaustion argument is one employers have long had success with in workplace bias lawsuits, often getting at least some claims thrown out in the early stages of a case. For example, a Bloomberg Law review of 333 employment discrimination cases where a federal district court ruled on the issue between July 1, 2018, and Dec. 31, 2018, shows employers scored full or partial victories 68 percent of the time. 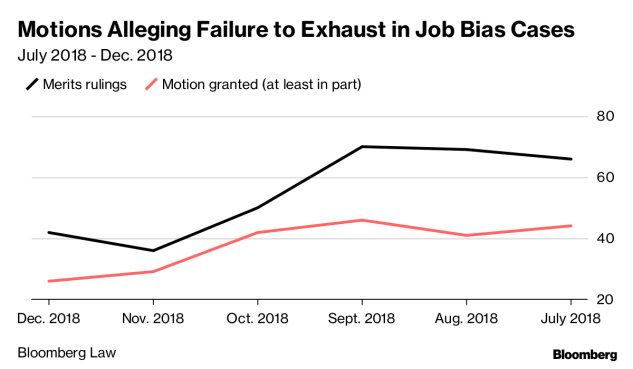 Davis’ employer, Bend County, says that she failed to include her religious bias allegations in the charge she filed with the state’s fair employment agency and instead alleged only that she had been the victim of sexual harassment and retaliation. That means she didn’t exhaust her administrative remedies on her religious discrimination gripe before suing, the county says.

One consequence of losing exhaustion as a jurisdictional defense could be that employers may re-examine the value of arbitration as a way of avoid costly litigation, Linker said.

If the justices side with Davis, it will maintain certain “safety nets” that a worker might be able to raise to excuse a failure to fully exhaust the EEOC process, employee-rights attorney Michael J. Pospis told Bloomberg Law. He is the owner and principal attorney at Pospis Law PLLC in New York.

The purpose of the requirement is to give job rights enforcement authorities a chance to look into a worker’s allegations and perhaps help the worker and employer reach a compromise short of litigation. It’s also to give the employer notice of what it’s being accused of and the opportunity to rebut or admit to the claims.

But whether Title VII of the 1964 Civil Rights Act’s administrative exhaustion requirement is a prerequisite to a court having the power (or jurisdiction) to hear a case or just an element a worker must prove to prevail has been sharply debated for years.

The U.S. Court of Appeals for the Fifth Circuit, which revived Davis’s case, is one of eight circuits that has held that pre-suit exhaustion of administrative remedies is simply an element of a job discrimination claim, Fort Bend County says in its brief asking the justices to review her case. But three other federal appeals courts have found it’s a jurisdictional requirement, the county says.

A finding by the justices that the requirement isn’t jurisdictional may not cause much of a shift in how employers approach the issue of administrative exhaustion, Linker said.

More often than not, an employer is going to raise the issue as an affirmative defense in its answer if there’s any potential question that the worker failed to exhaust the administrative process on a claim or claims before suing, he said.

The reality is that an employer should typically know at the outset of litigation whether nonexhaustion is a possibility because the company will have received both the worker’s charge and lawsuit and will be able to compare the allegations in the documents, Linker said.

But the high court’s saying administrative exhaustion is simply an element of a worker’s claim would likely dilute the key role that process is meant to play under federal job bias law, Linker said.

Employers often can knock “the wind out of the sails” of a worker’s bias charge through the response they file with the EEOC, which may reveal that the claim isn’t supported, he said.

The opportunity to reach a presuit mediated settlement with the help of the EEOC likewise may be lessened, Linker said.

Pospis doesn’t think workers will avoid the administrative process and take a chance on going to court without it.

If administrative exhaustion is deemed to be a claim-processing rather than a jurisdictional rule, workers may be able to raise other legal doctrines, such as equitable estoppel, equitable tolling, and waiver, to excuse failures to exhaust, he said. But workers “shouldn’t rely upon” that safety net as a reason for not filing with the EEOC or exhausting the administrative process, Pospis said.

He’s achieved good results through EEOC mediation for clients in the past, Pospis said.

And receiving the position statement the employer files with the EEOC in response to a charge can be very helpful, he said. “Sometimes I learn things about a worker’s case that I didn’t know,” Pospis said.