Immigration and Customs Enforcement acting Director Thomas Homan said he would quadruple or quintuple the agency’s work-site enforcement efforts. But what will that look like?

It’s still early, but there are signs the Trump administration is trying to combine the approaches of its two predecessors.

“You’re going to see more of a balance” between employers and employees being targeted, Paul Virtue of Mayer Brown in Washington, D.C., told Bloomberg Law Jan. 30. That’s a change from the Obama administration “focusing almost exclusively on employers,” said Virtue, who formerly served as general counsel of the Immigration and Naturalization Service.

Just last month, the Trump administration conducted work-site enforcement actions in each of the prior styles. In early January, ICE raided 7-11 franchises throughout the country and arrested 21 undocumented workers. At the end of the month, the agency audited the I-9 forms of 77 businesses in California.

ICE’s new work-site enforcement policy says it will combine audits with arrests of employers and workers. It also plans to continue an employer outreach program used by both Bush and Obama.

ICE’s strategy “focuses on the criminal prosecution of employers who knowingly hire illegal workers,” the agency said in a statement announcing the recent California audits. “Any workers encountered during these investigations who are unauthorized to remain in the U.S. are subject to administrative arrest and removal from the country,” the agency said.

Other than the 7-11 raid, “so far in terms of actual implementation,” there “hasn’t been too much that is changing from a work-site compliance standpoint right now,” Ruth Spillane of Fragomen, Del Rey, Bernsen & Loewy in San Diego said Feb. 2. 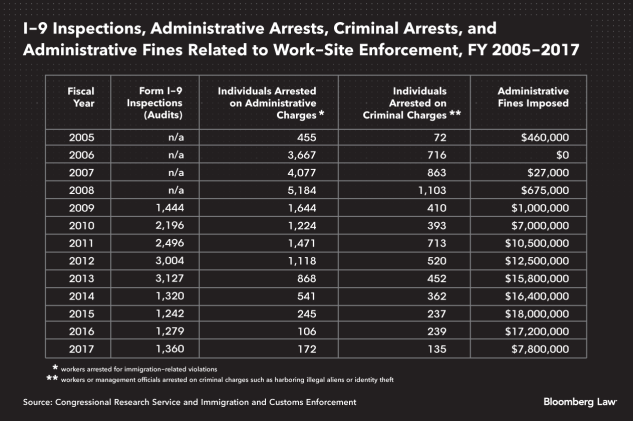 We still are in “wait and see” mode in terms of how the Trump administration’s will balance audits and raids, said Spillane, who focuses on employment-based immigration on behalf of large corporations.

If ICE believes there’s a business or industry with a lot of undocumented workers, the agency might conduct a surprise raid, she said. But it also could do “sweeping I-9 audits” to ensure broader compliance with paperwork requirements, she said.

“It’s hard to know if they’re going to go one way or the other,” Spillane said.

“Generally under the Bush administration work-site enforcement was a very low priority,” Sarah Pierce, a policy analyst with the Migration Policy Institute, told Bloomberg Law Feb. 2. That is, until Bush “turned the switch” later in his presidency and started conducting high-profile raids, she said.

“When I came into ICE, there was a lot of pressure to try to address the magnet of unauthorized employment more effectively,” said Julie Myers Wood, who headed ICE under Bush from 2006 to 2008. “There was a lot of frustration up on the Hill, and also within the executive branch” about the “significant number of unauthorized workers,” she told Bloomberg Law Feb. 2.

When ICE was first formed, “the focus was not as much on unauthorized employment as it was on unauthorized individuals that might be posing a national security threat,” said Wood, currently the chief executive officer of consulting firm Guidepost Solutions. ICE was formed in 2003.

In fiscal year 2005, ICE arrested 455 individuals on administrative charges such as being in the country illegally, according to data from the Congressional Research Service. There were 72 individuals arrested on criminal charges such as alien smuggling or identity theft.

Those numbers jumped to 5,184 administrative arrests and 1,103 criminal arrests at their peak in FY 2008.

It was the raids and arrests of workers that got the attention because of their visibility, Wood said. But “the targets were always the employers,” she said.

The Bush administration laid the groundwork for the Obama administration’s I-9 audit program, she said. ICE had to seek authority and funding from Congress to hire the auditors and put the program together, and that didn’t fall into place until the very end of the administration, Wood said.

But at the same time, Obama’s ICE didn’t arrest undocumented workers as Bush’s had done. That could change under Trump.

Obama was focused “almost exclusively on removing criminal aliens and less so on the people who were simply immigration violators who happened to be employed in a work site where an enforcement operation was conducted,” Virtue said.

“There were some forms of enforcement action clearly increased,” Steven Camarota, director of research for the Center for Immigration Studies, told Bloomberg Law Feb. 2. But then the numbers started dropping.

Investigations and prosecutions take time, and so may not be accurately reflected in the data, Camarota said. But “you still see the same general trend of a cutback in enforcement in the second Obama administration that seems to be real and meaningful,” he said.

I-9 audits dropped to 1,320 in FY 2014 and remained around that level throughout the remainder of the administration, according to ICE data. Administrative arrests bottomed out at 106 in FY 2016.

The dropoff in enforcement numbers was a deliberate policy choice, not due to a lack of resources, Camarota said. That means ICE has the capacity to ramp up work-site enforcement efforts again even absent the extra funding the Trump administration is seeking, he said.

At the very least, ICE could repeat what the Obama administration did in FY 2011: 2,496 I-9 audits, 713 criminal arrests, and 1,471 administrative arrests, Camarota said.

Conducting more high-profile criminal arrests would be “a very big deal,” Camarota said. When employers see someone get arrested for employing unauthorized workers, “the possibility of getting caught becomes real,” he said.

And an ICE raid is “terrible PR” for a business, Spillane said.

On the flip side, planning and executing a raid that includes arrests of both employers and unauthorized workers takes a lot of time, preparation, and resources.

Focusing on I-9 audits “was not very resource-intensive,” Pierce said. Plus “you can touch more employers” because audits can be conducted randomly and without much in the way of advance planning, she said.

By contrast, the 7-11 raids “required a massive amount of personnel on the day of, but also planning ahead of time,” Pierce said. And ICE only arrested 21 unauthorized workers, she said.

At the same time, “ICE is getting more efficient at conducting I-9 audits” with the advent of the electronic form, Virtue said. “They can do data mining pretty quickly,” which means less time between getting notice of an audit and getting slapped with a fine, he said.

The Bush and Obama administrations had the “advantage” of conducting work-site enforcement in a “bad economy,” Camarota said. The political argument in favor of enforcement is tougher to make when businesses argue that they need the workers because of the number of jobs being created and relatively low unemployment, he said.

On the other hand, Trump has to show rigorous immigration enforcement because that was one of his campaign platforms, Camarota said.

“We probably won’t see the big splashes in terms of the Trump administration for a while,” Virtue said. Still, he said, “all employers have to be ready.”

To contact the reporter on this story: Laura D. Francis in Washington at lfrancis@bloomberglaw.com