How executives are confronting the latest industrial disruptions is the topic of an in-depth report based on a survey of executives.
Mario Tama/Getty Images

In the First Industrial Revolution we got steam engines, and the next era brought us the assembly line. Then came the digitalization of manufacturing. Now, early in the Fourth Industrial Revolution—or Industry 4.0—robots are becoming routine and artificial intelligence is ordinary.

In its second annual report on how executives around the world are coping and growing amid the cascading changes, Deloitte provides a progress report and identifies four good leader “personas” for today. That and more in this week’s “HR Buzz” featuring the latest workplace trends, surveys, and reports.

It’s Not All Full-Steam Ahead on AI, etc.

The C-suite didn’t give themselves all A’s in how they’re handling the Fourth Industrial Revolution in second annual “Industry 4.0" readiness survey; and many executives gave themselves lower grades this year than last.

The more cautious self-assessments this time around may reflect a greater awareness of the challenges ahead, the consulting giant said in its report, “Success Personified in the Fourth Industrial Revolution: Four Leadership Personas for an Era of Change and Uncertainty.”

Deloitte wanted to find out how executives felt about four areas: how they perceive and care about the societal impact of their businesses; their strategies given a vastly changing world; their approach to investing in technology; and how they’re navigating the talent gap.

Some of the challenges on executives’ minds are how to choose amid an overwhelming number of technology choices and how to identify and eliminate the “organizational or geographic silos” that impair growth. Silos “restrict collaboration, limiting communication,” according to the report. Sixty percent of respondents said “their organizations’ Industry 4.0 knowledge was concentrated in a few individuals or groups.” 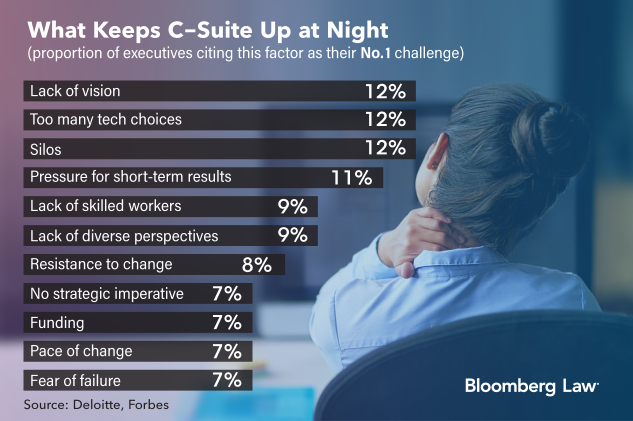 There are lots of good questions but not all the answers yet as executives look at how to ride the Industry 4.0 wave.

The company identified four leadership types who “seem to be getting it right” and sorted them into four “personas": “Social Supers,” “Data-Driven Decisives,” “Disruption Drivers,” and “Talent Champions.”

While a majority of respondents are “strongly committed to improving the world,” Deloitte found, the “Social Supers” managed to generate “new revenue streams” while doing so and believe that “societal initiatives, more often than not, contribute to productivity.” This group is also more inclined to invest in new tech and proactively train employees, researchers found.

The next group to emulate, the “Data-Driven Decisives,” take a methodical approach to strategy, based on lots of data. The DDDs have about double the confidence of other respondents, says Deloitte. They’re also committed to their employees and are “ethically driven.”

The “Disruption Drivers” invested in technologies not just to keep up but to forge ahead and “upend their businesses.” This group tends “to take a more assertive, hands-on approach” and favors a “holistic” decision-making style incorporating input from diverse stakeholders, Deloitte said.

The 2019 report is based on a survey of 2,042 global executives and public sector leaders representing 19 countries and all major industry sectors. The survey was conducted by Forbes Insights. Forbes and Deloitte also did one-on-one interviews with industry leaders and academics.

Deloitte defines Industry 4.0 as “the integration of the digital and physical worlds,” Dutton told Bloomberg Law.

Coaching is often a key to worker productivity and retention, and yet for a variety of reasons, employers often give it short shrift. So says training and development company InsideOut Development in an article for this month’s Chief Learning Officer magazine, based on a survey of 535 employees.

From Bill Belichick to Stella Adler, coaches can help people get better at what they do.

And unfortunately, coaching often has a flavor of being “remedial” or for problem employees, according to the article.

Incentive to get top leadership behind a robust coaching program: Bench strength and engagement increase and turnover decreases with effective coaching programs. They’re also good for recruitment, the company said.

Bloomberg Law asked InsideOut how you can tell if a coach is good. “You can recognize a good coach because every conversation is caring, candid and constructive,” company founder Alan Fine said in an emailed statement. “And the opposite is true for a bad coach. “ The company is based in South Jordan, Utah.