Love is often in bloom at the office, and almost a third of co-workers who date end up getting married.
LUIS ACOSTA/AFP/Getty Images

Asking a new boss to take the reins unprepared is bad for bosses and companies. And yet some companies wait months before delivering any training, Grovo says. On other fronts, Valentine’s Day is just around the corner, so we talked to CareerBuilder’s chief people officer about dating and even marriage among co-workers. Those are just some of the offerings in this week’s “HR Buzz” on the latest workplace trends, surveys, and reports.

Management skills can be learned if they’re offered in absorbable segments and in an engaging way. That’s the word from workplace learning company Grovo based in New York City and San Francisco.

And for heaven’s sake, bosses-to-be should get training before they’re tossed into the thick of things.

Motivation to learn is highest when a new manager is just promoted. And it gets the new leader off on the right foot, Grovo says in “Good Manager, Bad Manager: New Research on the Modern Management Deficit and How to Train Your Way Out of It.”

About four or five pieces of new information is all we can hold onto at once, the company says, adding that stories and humor help get the message across. And reinforcement is critical. “Our brains learn best when learning is spaced out over time and interleaved with lots of real-world practice and reinforcement,” according to the report. This “spacing effect” can double the amount learned in the long run.

There’s a lot of ground to cover: “A good manager is more like a team leader, coach, trainer, and psychiatrist all wrapped up in one,” the company says. 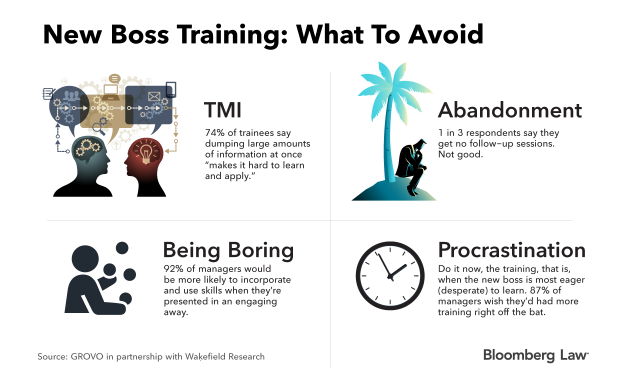 When a company promotes a top performer, “everything changes.” Without education and support, the new job “can quickly become a waking nightmare,” says Grovo.

The company said it “consulted everything from Frederick Herzberg’s classic theories of employee motivation” to the work of contemporary thought leaders such as Marcus Buckingham and Liz Wiseman.

Good managers can save companies $360 billion a year by increasing productivity, Grovo estimates.

Countdown to Feb. 14. Heart seems to be fluttering in time with your keyboard strokes and things keep falling off your desk. Is it love, too many espressos, the impending deadline, or perhaps a gentle reminder to sign up for the wellness program?

If it’s love, you’re in good company. “Office romance has been around forever and will continue to be,” Michelle Armer, chief people officer at CareerBuilder, told Bloomberg Law. “Workplace romance makes sense, as co-workers spend more time together than with anyone else given the long hours, late nights and close working conditions,” she said, noting that 31 percent of workers who started dating at work end up getting married, according to a survey the Chicago-based online job portal did last year.

Still it’s not news that co-worker dating can also be problematic. How does the global career adviser deal with office romance among its own workers?

CareerBuilder takes a practical approach and has clearly stated policies, says Armer. Leadership accepts the fact that co-workers will date and if needed, the company will “go above and beyond” to make it work. “In return, we expect employees to be transparent about their office relationships,” she said.

Obviously off-limits is any action that can be even perceived as resulting in unfair, preferential treatment for a particular person. And office dating isn’t permitted between people who are on the same team, or between an employee and his or her manager. But in such cases, the company does its best to transfer an employee to another team.

“We think carefully about who really needs, or wants to, make the move, and try and make sure our solution provides an equal opportunity to everyone involved,” Armer added.

Make sure that HR staff is trained to handle all aspects of office romances. “Transparency is the best policy, and HR should address questions and concerns head on,” she advised fellow employers.

By the way, employers may do something sweet for workers on Valentine’s Day as part of their regular engagement efforts. If HR or managers bestow gifts, “the number one rule is to make sure no one is excluded” and number two is to avoid anything expensive. That would send the wrong message. “Stick to small treats that everyone can enjoy,” such as a potluck, candy, or flowers, she added.

One creative approach, Armer suggested: “Use the day to celebrate the team and discuss what you all love about working together.”

The online job portal didn’t do its traditional love at the office survey this year, but last year’s indicated a slight love dip, with 36 percent of respondents reporting that they dated a co-worker versus 41 percent the year before that.

Meanwhile, maybe love in general is down. Only 51 percent of Americans plan to paint the town red one way or another this Valentine’s Day—jewelry, evenings out, flowers, and candy are all on the menu—down from 55 percent last year and reflecting a yearslong decrease, according to a survey from the National Retail Federation and Prosper Insights & Analytics.

“Those who are participating are spending more than ever and that could be the result of the strong economy,” speculates NRF President and CEO Matthew Shay.

“With employment and income growing, people appear to be expanding the scope of who qualifies for a card or a box of candy,” Shay said.

Be still, our hearts.

What the Robot Doesn’t Have: Soft Skills

Almost all talent professionals (91 percent) said soft skills are “very important to the future of recruiting and HR.”

“The rise of automation and artificial intelligence means that hard skills alone” won’t cut it, according to “2019 Global Talent Trends” report. Despite the importance of these skills, many employers “still struggle to accurately assess” them (the report offers some tips with case studies from employers).

Next up, work flexibility (72 percent of respondents cited its importance). “Employees expect to recover their work-life balance through flexibility,” “within reason.”

Anti-harassment efforts (71 percent cited it) and pay transparency (53 percent) round out the top four.

“The relationship between employers and employees is fundamentally changing,” says LinkedIn. Workers expect more transparency, accountability, and trust, but companies’ "hiring and HR practices may not have caught up yet,” according to the social network for professionals.

And employers need more from workers, especially “the ability to think creatively, collaborate effectively, and adapt quickly.” This report combines a survey of over 5,000 talent professionals in 35 countries with behavioral data from LinkedIn.