HR is getting a new image and role as "people teams are expected to be strategic and data-driven, whilst driving seemingly subjective criteria like employee wellbeing," according to a report on the field.
Photo: Topical Press Agency/Getty Images

An interesting new data crunch offers a glimpse of who makes up the world of human resources and where the field is headed. Among other things, HR is ditching its image of being “the fun police.” On other fronts, even when they’re not a perfect match with job requirements, many applicants are tossing their hat into the ring—and many employers are hiring them. That and more in this week’s “HR Buzz,” featuring the latest workplace trends, surveys, and reports.

HR is shedding its old-timey image of being “the fun police” or “the firing department,” and the profession’s come a long way since the days when it was humbly asking to be taken seriously, according to a recent report from HR platform Namely.

The average HR practitioner is a few years younger than the average U.S. employee—35 versus 42—indicating that HR is “still an appealing field for young job seekers,” according to “HR Careers Report 2019: Trends in salaries, titles, and more.” Thirty-five is a “sweet spot in an increasingly age-diverse workforce,” Namely observes, adding that an “HR team that sits on the generational border is well positioned” to understand the varied needs of the workforce.

Seventy-one percent of HR pros are women, up 4 percentage points since last year; 27 percent identified as male; and 2 percent identified as “other.” Namely lauded “the rise in non-binary gender classification” among HR folks. “With diversity and inclusion top of mind for many organizations, the HR industry itself goes beyond merely supporting non-binary employees and is giving them a seat at the table,” Namely says.

HR has a way to go on racial diversity though. While HR teams often are tasked with leading the way in this area, they could use a bit more of it themselves. Sixty-five percent of HR pros are white, with the next group, Asians, making up only 12 percent. “HR should commit to proactively tapping into new and diverse networks,” Namely advises. The company says it dug into its database of 1,000-plus companies and some 200,000 employees for its report. 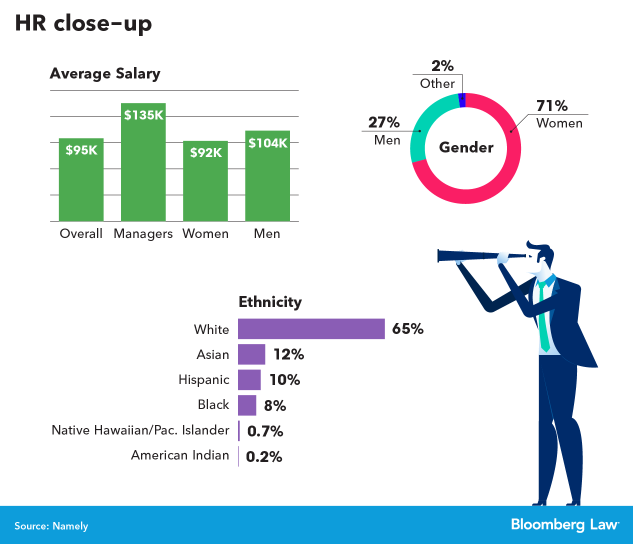 The average HR salary overall is $94,949, and surprise, there’s a gender gap. For women, that’s $91,981 versus $103,644 for men. The report also touches on HR practitioners’ tenure—they can be job-hoppers, depending on the size of the department, resources, and whether the C-Suite is paying attention to engaging them.

“If people truly are a company’s most valuable resource, it’s hard to overstate an HR professional’s role in cultivating and maintaining that asset,” Namely says.

Seventy-eight percent of job candidates would apply for a job even if they didn’t have all the prerequisites. And they’re not barking up the wrong tree—84 percent of hiring managers are either “very” or “somewhat” open to hiring and training applicants who don’t meet their skills requirements.

That’s from specialized staffing firm Robert Half, which also says in a new report that 62 percent were offered the job when they weren’t a perfect fit. This was most likely to happen in Charlotte, N.C. (74 percent got the job despite missing elements); San Diego (72 percent); and Austin, Texas, and Washington, D.C. (71 percent for both). Not bad places to call home either.

“We often evaluate whether the candidate has the right soft skills, such as the ability to communicate, lead others, adapt, troubleshoot and multitask,” Brett Good, senior district president with Robert Half, told Bloomberg Law. The company also looks for a candidate that fits a client’s culture.

Asking “Tell me about a day when everything went wrong. How did you handle it?” can help hiring managers delve deeper, he said.

What about candidates who can’t get past an electronic screening hurdle like a college degree? Should they “lie” and check the box but explain in the application that they actually only almost have a degree? A staffing firm “can help with the application process, presenting the skilled candidate for consideration in a timely manner, even if their qualifications don’t check all the boxes,” Good said. The company surveyed 300-plus HR managers and over 2,800 workers for its report.

Many employers wonder what they can do to help workers with an opioid problem—if they’re fortunate enough to recognize it—but just getting involved boosts the employee’s chances tremendously, according to the head of a safety advocacy group.

More employers are seeing safety impacts from opioid abuse—75 percent versus 70 percent a year ago—and fewer feel prepared to manage it, the National Safety Council reports based on a new survey.

Opioids—including the potent opioid fentanyl—were involved in 47,600 overdose deaths in 2017, according to the Centers for Disease Control and Prevention. For the first time in U.S. history, a person is more likely to die from an accidental opioid overdose than from a motor vehicle crash, NSC calculates.

Three-quarters of more than 500 human resources, safety, and management staff surveyed said their employer has been directly affected by opioid issues, most often absent staff and impaired performance. More than 30 percent of employers also said employees have overdosed, been arrested, or experienced at-work injuries or close calls as a result of the drugs.

Employers are often confused about what they can do about opioids, Nick Smith, interim president and CEO of the Itasca, Ill., group, told Bloomberg Law. Among other things, they should train managers to look for signs of abuse and take action to help workers. When the employer plays a role in getting a worker help, “the likelihood that the individual is going to have a better outcome increases significantly,” Smith said.

Check in Fridays to get your latest HR Buzz.

—contributed to this report.