Global executives anticipate much disruption over the next three years.
Photo by Lambert/Getty Images

Workers will be looking to their employers to help them navigate the continuing disruption as AI changes the nature of work, according to a new report. On other fronts, the Ethisphere Institute announces its latest list of the world’s most ethical companies. That and more in this week’s “HR Buzz” featuring the latest workplace trends, surveys, and reports.

Is It the Full Moon or Too Much Reorg?

Nearly three-quarters (73 percent) of global executives say they’re bracing for big changes over the next three years, according to Mercer’s 2019 Global Talent Trends study. That’s a dramatic increase over the 26 percent who said so last year. For only U.S. executives, the percentages were 65 percent versus 35 percent last year. And that means employees will also be feeling the heat, Mercer said.

While artificial intelligence will be a major player in the disruption, employers will need to rely on human intelligence, preparation, and engagement to succeed and grow.

Workers will be looking “to their employers for direction and inspiration,” Mercer says, “seeking more purpose, inspiration, and connectivity.” Mercer notes that job security is one of the top three reasons people signed on with their employers in the first place. 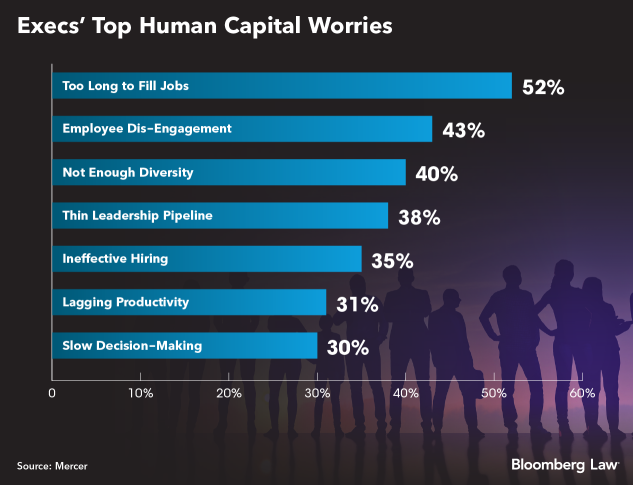 “Too much redesign and reorganization leaves employees reeling, feeling directionless and ultimately unproductive,” Mercer writes. Other effects: “heightened sense of isolation, a perceived lack of support from peers, and a decrease in energy levels.”

One of the key trends in 2019, Mercer says, will be making “work simple, intuitive, and digitally enabled to help your people grow and thrive.” The report reflects input from 7,300 senior business executives, HR leaders, and employees representing nine industries.

Mercer includes a short “Is Your Company Ready for the Future of Work?” self-evaluation for employers.

How Good Is Your Company?

Know your EQ? Nope, not emotional intelligence but rather “Ethics Quotient,” based on a ranking system developed by the Ethisphere Institute to measure a company’s ethics and compliance program, culture of ethics, efforts at corporate citizenship and responsibility, corporate governance, and leadership and reputation.

This year, 128 organizations received the “world’s most ethical company” designation from the institute, which is based on a 200-question survey containing both multiple choice and text responses, which must be backed up by documentation, Ethisphere said. Companies (or other organizations) that don’t make the cut still learn what their ethics quotient is.

The largest honoree this year, by number of employees, was . One of this year’s smaller privately held honorees was GeoStabilization International.

While the categories haven’t changed since 2007, “the questions have changed significantly as best practices have evolved,” Ethisphere EVP Michael Byrne told Bloomberg Law. The institute defines and advances “the standards of ethical business practices that fuel corporate character, marketplace trust, and business success,” according to its website.

Coming in March is a report from Ethisphere sharing insights and best practices gleaned from this year’s honorees.


Cities With Most Elbow Grease

Americans put in more hours on the job than workers in several other nations (at 1,780 hours, U.S. workers edged out the Japanese by a mere 70 hours). That’s according to a new report from personal finance website WalletHub.

So what U.S. cities are burnishing the country’s reputation as the home of the hard worker? At the top of the list are Anchorage, Alaska; San Francisco; and Irving, Texas. WalletHub compared the nation’s 116 largest cities on the basis of both direct and indirect metrics. The largest factor was the length of the average workweek.

If you guessed Washington was workaholism central, think again. Home to both the federal government and WalletHub, D.C. came in at a respectful No. 14 but nothing crazy. And despite the driven-New Yorker stereotype, the Big Apple came in at No. 73.

Other factors, both positive and negative: number of households with no working adults; rate of workers leaving vacation on the table; percentage of “engaged” workers, as defined by Gallup; and the rate of nonworking 16- to 24-year-olds. Also considered: commute time; rate of workers with multiple jobs; average volunteer hours; and average leisure hours per day.