Sure, sure, people are our most important asset and all that, but do companies’ actions always match up to the slogans? On another front, a new analysis based on a million-plus employee reports shows that sexual harassment reports are up 18 percent. That and more in this week’s HR Buzz.

Words and Action Not Always a Match

While finding and engaging talent is a popular topic of discussion, not everyone’s prepared to do something—or enough—about it, suggests a new report from talent acquisition software company Greenhouse and analyst and advisory firm HRWins. Employees overall rated people matters as two of the top three concerns of their businesses, and CEO/founders put them in their top four.

And yet half of survey respondents—outside of HR practitioners—said they spend three hours or less a month on “people-related” issues such as hiring, firing, and feedback. A third copped to spending less than an hour a month on them. Not good for engagement, the company said. The 1,300-plus respondents worked at U.S. (about three-quarters of them) and U.K. (about a quarter) employers.

Businesses are struggling to succeed as they find themselves caught between two massive challenges: “technological disruption” along with dramatic “cultural, demographic and societal shifts,” Greenhouse says. The company is based in New York City and HRWins is based in New Providence, N.J. 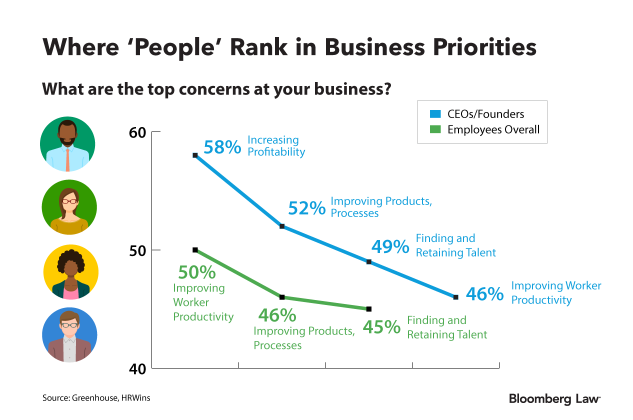 In terms of getting employees in and up to speed, only 38 percent of U.S. hiring teams and managers said they’d gotten interview training and 21 percent said the hiring process is “completely unstructured” at their companies. On a bright note, things seems to be mostly working out anyway: 85 percent of U.S. employees told researchers their expectations in hiring and orientation were either met (54 percent), exceeded (21 percent), or greatly exceeded (10 percent).

Back to the negative, researchers also found that improvement is needed in planning for the increasingly short tenures of many younger employees and the continuing exodus of the baby boomers.

Greenhouse notes that at first glance, its Workplace Intelligence Report might seem to call for pessimism, but it should actually be seen as a “reflection of where we are in solving the problems” resulting from “the pace of workplace transformation.” The report isn’t a “picture of the market sitting on its hands,” Greenhouse said.

No, it’s not all hoodies in high-tech, results of an office dress code survey suggest. HR software provider BambooHR polled 1,000-plus employees at small and medium-size technology companies and was surprised at the results.

Forty percent of workers said their employer not only had a dress code but a quite formal one—business professional. That means suits and ties for men and suits or dresses with jackets for women. Slightly more workers, 42 percent, reported that business casual was de rigueur at their places of work. We all know what that means—sort of.

The rest of the breakdown: 14 percent of respondents said their company’s dress code was for casual attire and 4 percent said their employer had no dress code.

Interestingly, 44 percent of HR respondents at companies with casual codes said they still wanted job applicants to show up in business casual; 13 percent expected business professional attire. And many in HR may expect more of themselves than others: almost half (49 percent) said it’s more important for HR to follow the code. Of course, 51 percent didn’t say that.

Who tells the employee that cutoffs and a fur vest aren’t business casual? Forty-three percent of HR respondents said that’s their job, 35 percent said it’s up to upper managers, and 22 percent said the person’s supervisor should do it.

You were wondering—HR Bamboo does not have a dress code, according to Tyler King, the company’s social media manager. “We have employees that wear everything from gym shorts to business casual,” King said in an email. “In my 3 years at BambooHR, I’ve never seen anyone wear anything crazy either. We try to hire the right people so we don’t have to worry about what they wear.” The company is based in Lindon, Utah.

There was an 18 percent increase in sexual harassment reports during 2017 and 2018, according to data from a million-plus individual reports. Forty-one percent of the reports were ultimately substantiated (38 percent of anonymous reports and 50 percent of those in which the complainant was named).

That’s the bottom line from NAVEX Global’s 2019 Ethics and Compliance Hotline Benchmark Report. The ethics and compliance software and services company is based in Portland, Ore.

The company started compiling its benchmark reports in 2008 and saw a spike in employee complaints to hotlines in fourth-quarter 2017, right in line with the #MeToo movement taking off, said NAVEX’s Carrie Penman, chief compliance officer and senior vice president, advisory services.

What to avoid in dealing with employee complaints? Penman said 70 percent of complaints at first blush seem to be “HR-related,” such as an unpleasant boss, and are too often passed on to HR with no follow-up or oversight from the compliance department. But a problem that first appears as a management-style issue often turns out to be something more severe, she said.

Another tip for employers: Anonymous reports would be substantiated at an even higher rate if everyone who made a report followed up. Penman said she’s doing a lot of thinking about why they don’t. “You only get one shot” at the initial interaction with an employee, she said. Sometimes people just lose the confidential pin number they’re assigned so that they can check back and follow the progress of the charge. In this case, employees can just start a new report but can’t access the old one. But some cases are falling through the cracks, and it’s not clear why.

The company’s data was drawn from a base of 44 million workers, most of them North American, at 2,738 companies with headquarters around the world.

HR Buzz will be back April 26.