Artificial intelligence and machine learning are here to stay and will disrupt companies that aren’t ready. That’s the message of a new report from But while some HR leaders have their arms wide open, 60 percent of HR executives think AI will kill more jobs than it creates, according to the company’s Future of HR Survey 2019. About the same proportion of CEOs (62 percent) believe the reverse—that AI will create net jobs, according to the report.

Forward-looking HR leaders “are implementing new technologies such as analytics, digital labor and artificial intelligence” and “pursuing the critical new skills needed to succeed,” KPMG says. The report quotes several global business executives on how they plan to continually keep employees up-to-date on the emerging technology and attract and retain the best and brightest workers.

A year is the new decade, in terms of falling behind technologically, says Robert Bolton, an author of the report and head of People and Change Center of Excellence and partner, KPMG in the U.K. “What’s worrisome is that as the paradigm shift we are in continually accelerates the pace of change, one or two years in this digital age might compare to a decade or two in the analog era. You can fall perilously behind before you realize what’s happening,” he said. 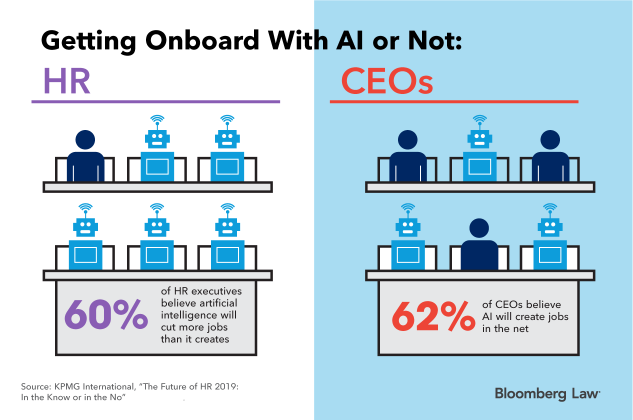 “HR is at a crossroads, the likes of which we’ve never seen. In fact we are now seeing CFOs and CIOs making a play for HR’s territory,” said Bolton. “CFOs are owning analytics and CIOs are owning total workforce learning and the insights agenda. HR leaders need to act now or they will be reduced to transactional and administrative tasks.”

Next CFO, Are You Out There Somewhere?

Over half (52 percent) of chief financial officers don’t have a successor in the pipeline, according to a survey by When asked why not, 64 percent of CFOs lacking a next-in-line said they aren’t planning on leaving anytime soon. Other reasons: lack of qualified applicants (17 percent) and CFO focused on other things (14 percent). Four percent said they weren’t worried about a successor because they’d be gone by then.

Heirless CFOs were most often seen at small companies (20-49 employees), according to Robert Half. Just 37 percent of these leaders had successors in mind.

The report is based on a survey of 1,100-plus CFOs at U.S. companies with 20 or more employees.

Do You Know the Pay in San Jose?

To determine the best places to find a job in the U.S., personal finance website WalletHub compared 182 cities across 30 metrics.

Scottsdale, Ariz., and Fayetteville, N.C., were first and last when socioeconomic factors were included, according to the company’s 2019’s Best Places to Find a Job report. Based on job opportunities only, Orlando, Fla., and Las Cruces, N.M., were first and last, respectively.

Scottsdale ranked as the best city to find a job overall, ranking high for both categories, Gonzalez said. Orlando ranked first in the job market category, but it didn’t do as well in terms of socioeconomics, Gonzalez said.

The best and second-best average monthly starting salaries in the U.S. are earned by workers in San Jose, Calif. ($5,270) and Washington, D.C. ($4,820), according to WalletHub. But D.C. also has the longest work and commute time, with Pearl City, Hawaii, in second place. Highest employment growth is seen in Colorado Springs, Colo., with Reno, Nev., following. South Burlington, Vt., has the lowest unemployment rate in the U.S. and also happens to be the home of