A House bill would make it easier for pregnant workers to seek reasonable accommodations on the job.
Photographer: Daniel Berehulak/Getty Images

The news isn’t all rosy for women: A researcher found that new moms can get a subtle message from their workplaces that they should consider bagging the outside job for now, and a science association delves into bias against women—especially of color—in leadership roles.

But on the bright side, women are doing well in some cities. You’ll find it all in this week’s HR Buzz.

Madison, Wis., was named the No. 1 U.S. city for women, for its low female unemployment rate (1.6 percent) and great work-life balance, among other things. Plano, Texas, was No. 2, striding up seven places from last year’s Smart Asset report.

This is the second year the financial technology company dug deeper into Census Bureau data on 100 U.S. cities to find out where women are seeing the most success.

Two Virginia cities made the top 10—Arlington, Va., scored the No. 3 slot, and Alexandria got No. 10. Seattle was No. 4, followed by Minneapolis and Durham, N.C. Arizona also had two top 10 cities—Chandler and Scottsdale were Nos. 7 and 8. Fremont, Calif., came in at No. 9. 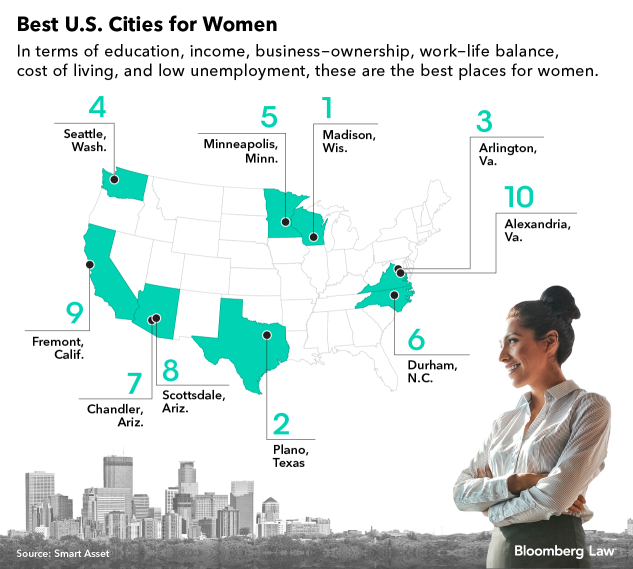 The top 10 represent East and West coasts and both the North and South, the company noted. And all of the top 10 have well-educated populaces.

Overall, the fair sex has its lowest unemployment rate since 2000, and women business owners are 22 percent more numerous in the U.S. than five years ago.

Women, especially minority women, are underrepresented in leadership roles and often taken less seriously because of their gender or race. That’s the word from the Association of Women in Science, which says the problem is seen across all sectors.

AWIS released the preliminary results of a study, based on a survey of 125 of its women members, at its Innovation and Inclusion Summit April 24.

Chief Research Officer Dr. Heather Metcalf said she wishes she could say she was surprised by the study results. “But this is what I study, and every time I give a presentation on my research I hear about all the different biases,” she said, adding: “The part of me that’s an idealist was disappointed but not surprised.”

AWIS also looked at data from other sources to see who’s getting ahead in STEM-related fields.

Stay tuned for the full report by the end of May, according to Metcalf.

The group promises to have some recommendations on eliminating some of the barriers. AWIS advocates for women in science, technology, engineering, and mathematics.

Why do more women than men leave the workforce upon the arrival of a baby? Social theory has tended to put it on pregnant women opting out of the job and turning to new priorities, but a Florida State University researcher and her colleagues identified a “pushed out” factor.

Pregnant workers are in fact invested in their jobs and “strongly motivated to preserve their legitimacy at work,” FSU’s Samantha C. Paustian-Underdahl writes.

But pregnant women can perceive decreased career encouragement from their workplaces, possibly because of the implicit biases of co-workers. And that can dampen their own enthusiasm for returning, the researchers said.

That’s particularly important to remember as employers do a significant amount of hand-wringing over how best to retain women workers, they say.

Among the practical implications of the study, the authors say, is that managers should be aware of subtle biases and educate workers about them. They also can support pregnant employees by assigning them challenging long-term projects involving others.

Employers also could help new parents connect with other working parents at the company for mutual support and to learn about strategies and resources.

And expectant mothers should be made aware of the implicit bias that might be coming their way, so that they aren’t toppled by it. Pregnancy “is a pivotal time for the reevaluation of work and life roles,” the authors say.

Researchers followed male and female partners via six waves of online surveys starting from before the pregnancies were disclosed to employers. Participants completed the last surveys between weeks 30 and 35.

Co-researchers were Asia A. Eaton of Florida International University, Ashley Mandeville at Florida Gulf Coast University, and Laura M. Little at the University of Georgia.

The study was published in the Journal of Applied Psychology.