The House passed a $3 trillion Democratic economic stimulus bill Friday that and President have already rejected and isn’t likely to trigger bipartisan negotiations any time soon.

The measure, passed 208-199, would give cash-strapped states and local governments more than $1 trillion while providing most Americans with a new round of $1,200 checks. House Speaker said it should be the basis of talks with the GOP-controlled Senate and , which have called for a “pause” to allow earlier coronavirus recovery spending to work. 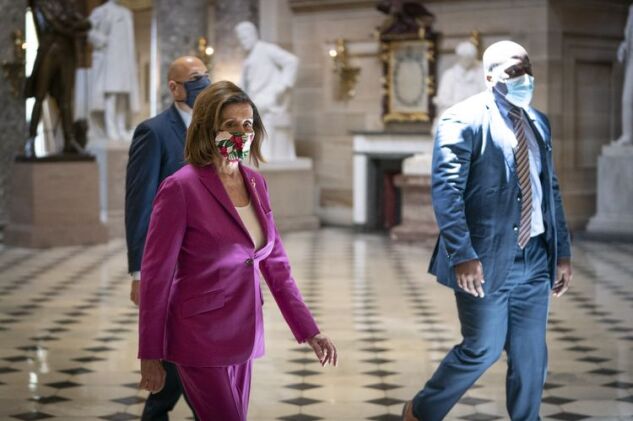 Nancy Pelosi walks through the U.S. Capitol in Washington, D.C., U.S., on May 15.
Photographer: Sarah Silbiger/Bloomberg

“A horrible virus has made a vicious attack on the lives and livelihoods of the American people, and indeed on the life of our democracy,” Pelosi said on the House floor before the vote. “It’s always interesting to see how much patience some people have with the pain and suffering of other people.”

The measure was praised Saturday by New York Governor , a Democrat whose state has seen its budget damaged by coronavirus-related expenses and plunging revenues.

“To the Senate, they should respond quickly,” Cuomo said at a daily news briefing. Previous stimulus means funded “millionaires” but “forgot the police and firefighters and working Americans,” he said.

Cuomo also criticized what he called a rising tendency to look at the Covid-19 death toll by political affiliation, since the hardest-hit states are led by Democrats. “Shame on you,” he said.

New Jersey Governor also urged action in the Senate, citing a “bipartisan chorus” that wants to help struggling states. The funding contained in Pelosi’s bill is “absolutely necessary,” he said.

Pelosi this week has repeatedly invoked Federal Reserve Chairman , who has said will have to inject more fiscal stimulus into the economy to prevent a prolonged recession. The U.S. has more than 1.4 million coronavirus cases, and more than 86,000 have died.

But Republicans also cite the Fed chief, with Senate Majority Leader saying Powell hasn’t explicitly said how quickly Congress must act. He and other Republicans have dismissed the House Democrats’ bill as a liberal wish list and are using it to attack , whom polls give an increasing chance of holding the House and taking the Senate in November’s election.

“This is much more about political messaging than effective legislating,” Republican Representative of Oklahoma said.

GOP members said some provisions don’t belong in a virus bill, such as reductions in immigration enforcement, providing stimulus checks to undocumented immigrants, money for the troubled U.S. Postal Service and a national requirement to hold elections by mail. 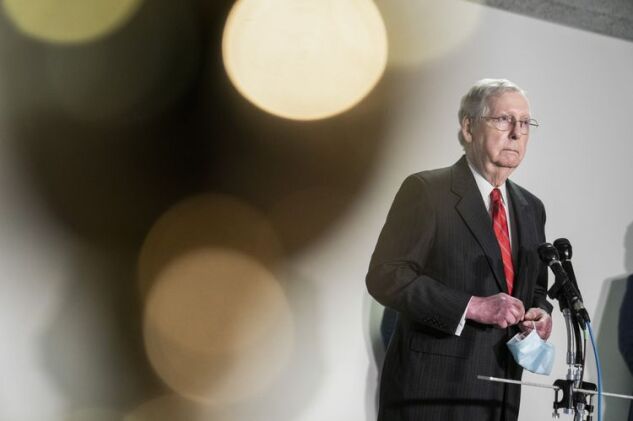 Trump and Republican congressional leaders have acknowledged, however, that some sort of further economic stimulus will likely be necessary as the economy continues to shed jobs. The number of people filing for unemployment benefits since March now exceeds 36 million.

“Phase four is going to happen but it’s going to happen in a much better way for the American people,” Trump old reporters Friday. He said he holds leverage over Democrats in any future talks.

“We have all the cards because we have the cards of the American people. I know what they want,” the president said.

“I would not wait for December,” McCarthy told reporters. “But I would not pass a bill without having any hearings, from the standpoint, without any feedback.”

The Senate plans to ignore the House proposal next week, focusing instead on confirming Trump administration nominees. Aides say that in June, the chamber may consider legislation to give businesses protection from virus-related lawsuits, and that bill could be combined with some limited economic aid.

McConnell said Thursday it will take time to evaluate the nearly $3 trillion in spending already enacted by Congress to combat the virus and its economic effects.

“The chairman of the Fed is correct and we do anticipate having to act again at some point,” McConnell said in an interview on . “I do think though in terms of timing, the chairman of the Fed didn’t say how quickly, and we need to verify how we have done so far and make sure whatever mistakes we have made we don’t want to repeat.”

A group of the most vulnerable Democrats in swing districts voted against the bill, arguing that they preferred a bipartisan approach to the virus.

“I could not in good conscience vote to accept this Washington gamesmanship, or vote to approve unrelated wastes of taxpayer dollars, while Iowa sees its Covid-19 case rates climbing and parts of my district become a national hot spot,” said Iowa freshman Democrat .

Oklahoma’s said in an interview that in addition to opposing the inclusion of provisions such as those on immigration, she objected to spending $3 trillion without committee hearings and being given an 1,800-page bill only three days before a vote.

“I know there are many of us who are concerned about the size of this package and the scope that goes beyond direct response,” Horn said. “We need to have a transparent process that allows for bipartisan agreement.”

Horn said Congress should work out a compromise bill focused on state and local aid, fixing small business loans and defeating the virus.

Other Democrats, though, backed Pelosi’s decision to expand the plan’s reach to include priorities such as eliminating the tax code’s cap on state and local deductions for individuals, as well as expanded employee-retention tax credits.

But the speaker decided against several costly items sought by progressives including recurring stimulus payments to Americans linked to future unemployment. She said Congress could vote on more rounds of aid later if necessary.

“At the core, our response from Congress must match the true scale of this devastating crisis. The Heroes Act — while it contains many important provisions — simply fails to do that,” Jayapal said in a statement.