Employers in four U.S. industries felt the brunt of the EEOC’s annual fiscal-year-end enforcement rush, especially health-care providers such as and Life Care Centers of America and retailers like and

Seven of the Equal Employment Opportunity Commission’s 15 district offices filed the bulk of the 87 new enforcement actions launched by the agency in September, the last month of its 2018 fiscal year. The lawsuits involve a variety of claims, with allegations of sexual harassment and disability-based mistreatment being leveled most often by the agency.

The findings are based on Bloomberg Law’s review of new lawsuits filed by the EEOC for that month. Some of the lawsuits were brought against more than one company.

The EEOC sued employers in the health-care and social assistance industry in 18 of the September filings. Community Care Health Network and prison health-care contractor Corizon Health also were among those in the industry that were sued.

Retailers were the subject of 15 of the new EEOC lawsuits. That’s the same number of lawsuits that the agency filed against the industry in September 2017, when the retail trades topped the list in the agency’s year-end litigation push. Three of this year’s cases named the nation’s largest employer, as a defendant. Family Dollar and shoe seller were also among the retailers that felt the agency’s enforcement pinch this September. 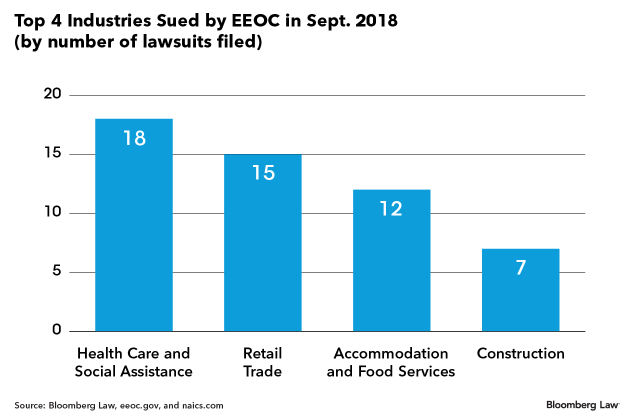 Last year’s second-place finisher, the accommodations and food service industry, was next on fiscal year 2018’s list. Restaurants were again the chief focus in the industry, with 10 of the 12 new cases leveled against eateries. Seven of those cases allege workplace harassment, which an EEOC task force in June 2016 said can flourish in that sub-industry because restaurants sometimes have limited communications between corporate levels, often put workers in situations where they rely on customer service or client satisfaction, and frequently tolerate or encourage alcohol consumption by employees.

The construction industry was the fourth-most-frequently sued by the EEOC, with seven of the new cases brought on behalf of workers.

In all, 52 of the 87 new cases were brought against companies in those four industries. Five other industries face four new lawsuits each, including transportation and warehousing employers and information companies.

The Memphis, Tenn., and Charlotte, N.C., districts were the next most active this September, bringing nine new lawsuits each. EEOC area offices in Little Rock, Ark., and Nashville, Tenn., also are part of the Memphis district, and the Charlotte district has three field offices elsewhere in the Carolinas and two in Virginia. 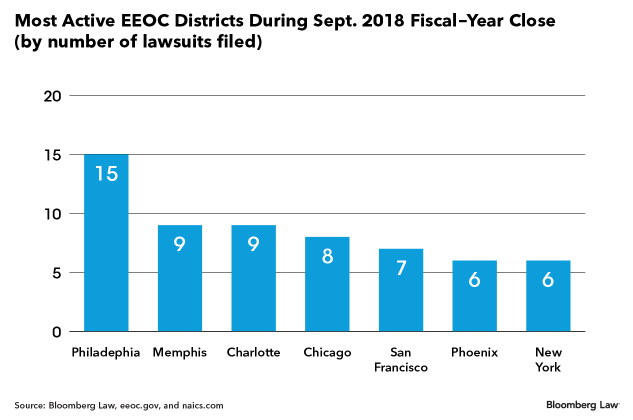 The Chicago district office, which has area offices in Milwaukee and Minneapolis, was next on this year’s list with eight new filings, followed closely by the San Francisco district’s seven new cases and the Houston and New York districts with six each. The San Francisco district has a field office in Seattle and local offices in Oakland and San Jose, Calif., while New York has area offices in Boston and Newark, N.J., and a local office in Buffalo, N.Y. The Houston district has a single field office in New Orleans.

All told, 60 of the 87 September FY 2018 lawsuits were brought by those seven EEOC districts.

The 87 case filings closely mirrored the EEOC’s new litigation in September 2017, but with greater emphasis on enforcement of laws banning sexual and other workplace harassment. The agency said Oct. 4 that its sexual harassment filings jumped more than 50 percent from last year to FY 2018, a period that largely coincided with the rise of the #MeToo movement.

To contact the editor responsible for this story: at pkushin@bloomberglaw.com