Employers are wondering if they’ll have to add pay data to the information on race, sex, and ethnicity they must already send to the Equal Employment Opportunity Commission, after a federal judge this week said the Trump administration failed to justify why it put a freeze on new pay data requirements finalized by the EEOC in 2016.
Photographer: Thomas Trutschel/Photothek via Getty Images

Companies with more than 100 employees will have to report to the U.S. government data about how much workers are paid broken down by sex, race and ethnicity, possibly as soon as this spring, according to a new court ruling.

The pay disclosures were finalized by the Equal Employment Opportunity Commission in the summer of 2016, but the Office of Management and Budget froze the expanded requirements after President Trump took office. The National Women’s Law Center and other groups sued, and on March 4, Judge Tanya Chutkan ruled in their favor, saying that the government didn’t properly justify its decision.

The OMB could appeal, and it’s not clear whether companies will have to comply by the original deadline of May 31. Still, the decision comes amid a rising global push to get companies to show that their pay practices are fair. Under shareholder pressure, most of the big U.S. banks last year released modified information on the gender pay gaps in their workforce. The U.K.’s new gender pay gap reporting requirements are entering their second year.

“This is part of a real cultural shift we’re seeing around transparency in pay,” said Emily Martin, vice president for education and workplace justice for the National Women’s Law Center, one of the groups that sued to get the wage information included. “In order to have equal and fair pay, employees need more information about their employers’ pay policies. So this is one step, but it’s not the last step.

”Employers already submit demographic data to the EEOC annually. The new disclosures would call for more granular analysis, requiring them to report the racial and gender makeup of employees in each job category (executive level, professionals, sales workers, etc.) within 12 pay ranges, for each of a company’s physical locations. The current form fits on one page. The expanded form could need 10.

“It’s kind of in the weeds, really technical detailed stuff,” said Michael Eastman, senior vice president with the Center for Workplace Compliance. “That’s where the burden comes in.” 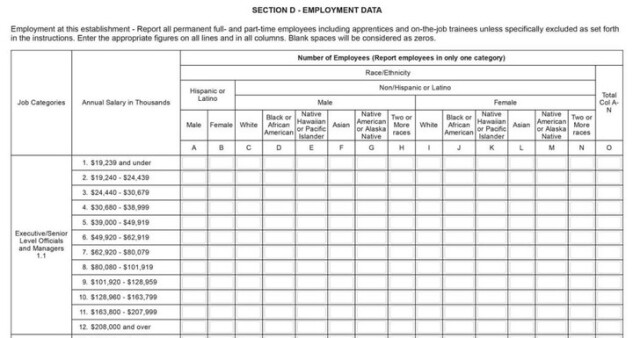 The new disclosures for just one of several job categories.

The U.S. Chamber of Commerce, which strongly opposed the expanded reporting, says it would cost businesses more than $400 million annually. The EEOC says it’s more like $53 million. In a 2017 letter to OMB director Mick Mulvaney, the Chamber urged the agency to reconsider the approved collection, saying the EEOC “materially underestimated the burden that the revised form would impose.”

Under rules adopted in 2015, the U.S. Securities and Exchange Commission requires public companies to compare their workers’ median pay with their CEO’s total compensation, including salary, bonus and equity awards. After companies registered similar concerns about the burden of reporting based on their entire payroll, the SEC allowed them to use statistical sampling. The first results were posted last year.

”The demographic data provided to the EEOC is confidential, and the pay data would be too. Even so, research suggests the act of measuring and reporting can have an effect. A study from several business schools, including INSEAD, Columbia University and the University of Copenhagen, found that in Denmark, which requires companies with over 35 employees to report pay data by gender, the gender pay gap shrunk by 7 percent.

And once the data exists, it becomes a target for activists and investors. New York City pension funds helped pressure Goldman Sachs and MetLife to disclose diversity data in 2012, according to the New York Times. Natasha Lamb, a managing partner at Arjuna Capital, is for similar transparency around pay: Late last year, she filed shareholder proposals with 11 banks and tech companies asking them to publicly report their median gender pay gaps. So far, only Citigroup has done so.

“Even if there’s a regulatory mandate from the EEOC, that might help narrow those gaps, but it won’t make the data transparent to investors,” Lamb said. “We want to be able to measure apples to apples on how companies are doing on narrowing those gaps.”

To contact the authors of this story: Paige Smith in Arlington at psmith347@bloomberg.net Rebecca Greenfield in New York at rgreenfield@bloomberg.net Jeff Green in Southfield at jgreen16@bloomberg.net

To contact the editor responsible for this story: Janet Paskin at jpaskin@bloomberg.net