When Brett Kavanaugh arrives for work at the Supreme Court next week, he’ll be right where many in conservative legal circles thought for years he’d wind up.

But what would’ve been a smooth transition for the D.C. Circuit judge and former Kennedy clerk has been marred by the bitterly contentious Senate confirmation hearings and FBI investigation involving Christine Blasey Ford’s sexual assault allegations.

The searing national debate over his fitness to serve will complicate his legacy, and even his first days on the court.

Kavanaugh early on will be forced to choose whether he wants to try to restore his reputation by his behavior on the bench, or continue with the sharp-elbowed partisanship that we saw during his last hearing before the Senate Judiciary Committee, Daniel Epps, a law professor at Washington University School of Law in St. Louis, and co-host of the Supreme Court podcast First Mondays, told Bloomberg Law. 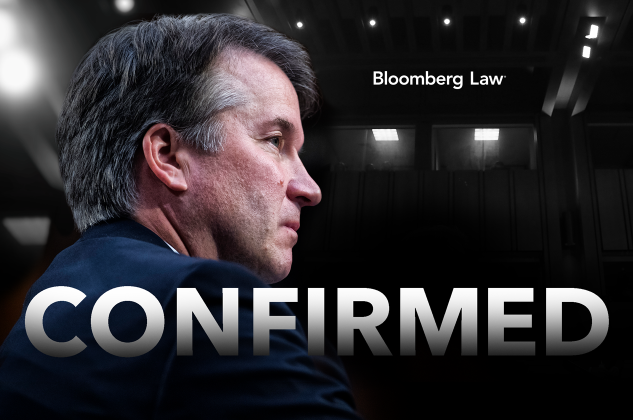 He’ll likely be on the bench as early as Tuesday when the high court sits for its next arguments, and all eyes will be on him to see if he’ll speak during his first set of arguments. On the D.C. Circuit for the past dozen years, he was known as an active questioner.

Given the political spotlight Kavanaugh’s confirmation battle put on the justices and the court, Kavanaugh may want to avoid ruffling any feathers, Epps said.

Clarence Thomas was in a similar position on his first day, but the beginning of the Kavanaugh era is magnified by the rightward march of the court under Donald Trump and a nation divided even more politically and culturally than it was 27 years ago.

It’s hard to get away from the bitter confirmation process that just occurred, Epps said.

Before he shakes a single hand or sits for arguments, Kavanaugh might look to a Supreme Court case from last term for guidance on how his epic confirmation fight, and his starring role in raising the partisan pitch, might play with Chief Justice John G. Roberts.

In a gerrymandering case Roberts, who is fiercely protective of the court as an institution, warned that if the court itself looks partisan, that’s going to “cause very serious harm to the status and integrity of the decisions of this court in the eyes of the country.”

Kavanaugh may also need to consider his low public approval over the misconduct allegations and the #MeToo fallout. Moreover, he enters the court with some 2,400 members of the legal academic community, of which he is also a member, openly questioning his temperament to serve.

But Carrie Severino, of the Judicial Crisis Network, said Kavanugh’s temperament on the bench isn’t likely to reflect his emotional testimony in front of the Senate. She pointed to an Oct. 4 Wall Street Journal op-ed, where Kavanaugh wrote that he wasn’t speaking as a judge during the hearing, but rather as a “son, husband and dad,” and said he has a dozen years experience on the bench that demonstrates his demeanor.

Kavanaugh, though, isn’t likely to be the only one trying to just get along. His colleagues have every incentive to do so as well, Epps said, noting they have to work together for the rest of their careers or even their lives.

Epps’ best guess is that Kavanaugh will try to restore the good reputation he enjoyed on the D.C. Circuit where he was known for getting along well with his colleagues no matter their judicial philosophy.

Kavanaugh is a known quantity to the justices, Helgi Walker, of Gibson, Dunn & Crutcher LLP, Washington told Bloomberg Law. Walker has argued several times before Kavanaugh on the D.C. Circuit and also worked with him in the White House under George W. Bush.

The justices frequently cite Kavanaugh’s opinions and several know him already, Walker said, noting he worked with Justice Elena Kagan while she was the dean of the Harvard Law School.

Before he can take the bench, he’ll take the two oaths of office required for Supreme Court justices. 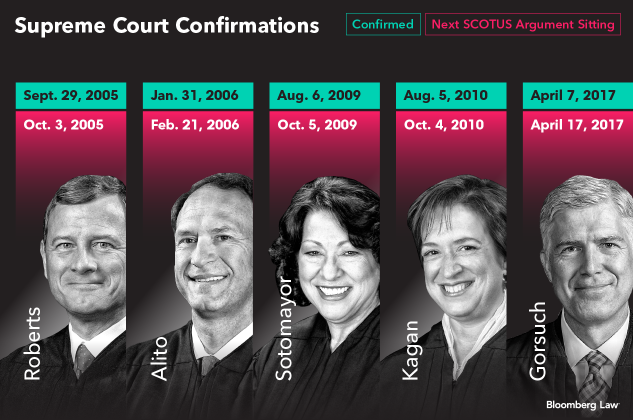 The court’s already heard four arguments in cases, including a death penalty appeal, that Kavanaugh in all probability won’t decide.

It still has four arguments left in the current sitting, which runs through Oct. 10. Those cases include immigration detention, products liability, and the nitty-gritty of what constitutes a “robbery.”

In addition to getting up to speed on cases, Kavanaugh may have to familiarize himself with the dozens of petitions and briefs that the justices will consider in their private conference Oct. 12 where they decide which cases they’ll take.

Author David Kaplan recently wrote that Justice Neil Gorsuch’s failure to attend a similar conference after he was just confirmed irked Roberts, who thought it was important for the court to show that it was operating at full force after more than a year with eight justices, Epps noted.

A related question that Kavanaugh will have to tackle early on is whether to join the “cert pool” for these private conferences.

Since the 1970s, a majority of the justices have pooled their clerk resources to tackle the more than 7,000 petitions that the court gets each term seeking certiorari, or review.

One clerk is assigned a petition and asked to write a memo suggesting if the court should grant or deny review. The memo is shared across the chambers that participate in the pool.

But neither Justice Samuel A. Alito Jr. nor Gorsuch have joined the pool. With each justice departing from the cert pool, the workload for those within the pool gets heavier.

Again, if Kavanaugh is looking to play his first few days on the court low-key, he may sign on to the cert pool—something that would also lower his massive workload and help him get up to speed.

Kavanaugh will likely be joined by familiar faces.

During his confirmation hearing, he said that he’d already provisionally hired four clerks to assist him during his first term.

Some of those are likely to be his former clerks from his time on the D.C. Circuit, William Jay, partner at Goodwin Procter LLP, Washington, told Bloomberg Law in mid-September. Though he may pick up some of the clerks Kennedy had hired prior to the announcement of his retirement, he said.