A group of Starbucks Corp. workers at a shop in Mesa, Ariz., petitioned the National Labor Relations Board to hold a union election.
Photographer: Stephen Chernin/Getty Images

Newly unionized workers at a store in Buffalo, N.Y., have an immense opportunity to influence the iconic coffee company as the sides prepare to negotiate the chain’s first U.S. labor agreement.

But the coming talks also carry enormous pressure for the union, as a bargaining unit of just 36 eligible workers tries to win concessions from a multinational brand that could sway organizing drives brewing in other parts of the Starbucks empire.

After winning recognition from Starbucks this week, the labor group now faces the far tougher task of reaching an inaugural collective bargaining agreement, a legally binding contract that sets wages, benefits, and working conditions—and can take months and sometimes years to negotiate.

The deal they reach—if the talks get that far—could set a benchmark for nearly 9,000 Starbucks stores from Boston to Seattle. It potentially could drive up wages and prompt more workers to organize, but failing to deliver would raise questions about the union’s utility to workers.

The negotiations also will show whether Starbucks plans to bargain “in good faith,” as the company’s top North American executive pledged, or whether it will impede a first contract as intensely as it tried to thwart the union vote.

Organizing battles are intensifying at Starbucks locations in other cities across its vast U.S. network, with workers at one shop in the company’s hometown of Seattle announcing Tuesday they would join colleagues in Massachusetts and Arizona in seeking to unionize. All of them will look to Buffalo as their lodestar.

“Workers know that they’re going to be setting a standard with implications far beyond their store,” said Rebecca Givan, an associate professor of labor studies and employment relations at Rutgers University. “If they win certain guarantees, some of them may be rolled out to other Starbucks that haven’t unionized.” 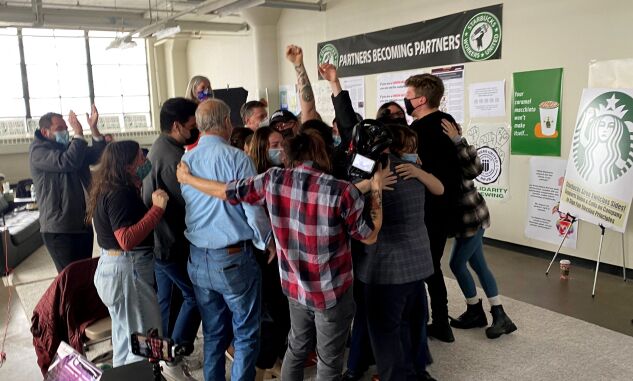 A 2009 study by the left-leaning Economic Policy Institute found a quarter of new unions still didn’t have a contract more than three years after winning a representation election, and some never got one at all.

“Starbucks is going to have to decide how they bargain,” said Bruce Raynor, a former president of Workers United, the union that represents workers at the Buffalo store. “Do they try to bargain in good faith and make a good deal, or do they play hardball?”

The company on Monday agreed to bargain with the union at the Buffalo shop, marking the first time organized labor had gained a foothold within the company’s U.S. properties. Another bargaining unit at a different Buffalo-area store may soon be certified by the National Labor Relations Board if several disputed ballots end up in the union’s favor.

Workers at a third Buffalo-area store sided against unionization, though the group has filed a complaint alleging that Starbucks engaged in a “shock and awe” campaign to intimidate workers.

In a letter to workers, Rossann Williams, Starbucks’ North America president, said the company would bargain with the Buffalo store where the union won, though it still doesn’t support the endeavor.

Despite the rhetoric, the company’s willingness to bargain is a promising development for labor, said Cathy Creighton, a union attorney who directs Cornell University’s labor and industrial relations program in Buffalo.

“It’s a very good sign, and I think they may actually bargain in good faith,” she said.

Starbucks had fought hard to stop the three elections in upstate New York, arguing that any vote should involve at least 20 stores in the area. The company also dispatched former Chief Executive Officer Howard Schultz to persuade workers against joining the union.

At the same time, the company was aware that an aggressive anti-union campaign could backfire and anger many liberals in its customer base.

“If a significant portion of our employees were to become unionized, our labor costs could increase and our business could be negatively affected,” the company wrote in a report filed with the Securities and Exchange Commission last month. However, the company wrote, “our responses to any union organizing efforts could negatively impact how our brand is perceived and have adverse effects on our business, including on our financial results.”

The Buffalo store won’t be Starbucks’ first foray into collective bargaining. In Canada, the coffee chain reached an initial contract in June with workers at a Victoria, British Columbia store who are represented by the United Steelworkers.

Weeks later, Starbucks corporate publicly took credit for recent wage hikes there, insisting the pay boost had nothing to do with the union contract.

“The union distorts the facts,” the company said, “by taking credit for the wage increases implemented unilaterally by Starbucks Canada.”