Shoppers at the Destiny USA mall in Syracuse, N.Y., walk past a sign encouraging them to emphasize safety.
Photographer: Maranie Staab/Bloomberg

The number of federal workplace safety inspectors at OSHA fell to a record low by the close of fiscal year 2021, according to newly obtained agency numbers.

The Occupational Safety and Health Administration ended fiscal 2021 on Sept. 30 with 750 inspectors, a 5% drop from 790 inspectors in fiscal 2020 and the lowest ever for the 51-year-old agency.

Bloomberg Law obtained the data through a Freedom of Information Act request.

The loss continues a trend since at least fiscal 2014 where the agency ended the year with fewer inspectors than when it started. The lone exception was 2020, when the ranks grew by 40 positions during the Trump administration.

OSHA’s difficulties in hiring and retaining inspectors come at the same time President Joe Biden and congressional Democrats want to pay for a hiring spree at OSHA—doubling the number of inspectors by 2024. The workplace safety agency also finds itself shorthanded at the same time the administration is fighting to launch its ambitious program to force every U.S. business with 100 or more employees to ensure workers are fully vaccinated against Covid-19 or tested for the virus at least weekly.

The House’s proposed fiscal 2022 appropriation for OSHA would pay for about 115 new inspector positions. The Senate hasn’t released its proposal.

“OSHA continues to look at ways to increase the pipeline of candidates and speed the hiring process,” the agency added.

Newly installed agency administrator Doug Parker, who was sworn in Nov. 3, said at his May Senate confirmation hearing that hiring more inspectors, investigators, and administrative staff would be his “top priority.” Parker told lawmakers he would determine if the recruitment and hiring process can be accelerated and consider why qualified candidates would decide not to join OSHA. 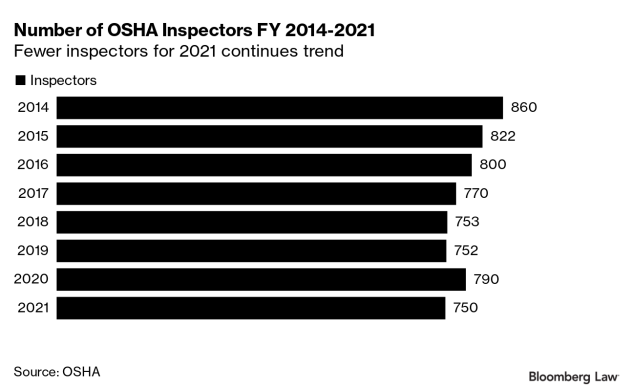 M.K. Fletcher, a safety and health specialist with the AFL-CIO labor federation, said the low number is the result of a long-term, widespread problem of undervaluing worker safety.

“Staffing an agency with skilled professionals doesn’t occur over a short time period,” Fletcher said. “The agency has been under resourced for decades and the lack of investment into the field of worker safety has resulted in fewer skilled individuals in the labor market for public and private sector alike.”

The hiring process has become “extremely long,” slowing down the agency’s ability to fill new positions and replace departing staff members, said Richard Fairfax, who retired from OSHA in 2014 as the career-service deputy administrator.

“It’s not uncommon for the process to go six months or more,” said Fairfax, now a consultant with the National Safety Council.

During 2021, the agency hired 93 new inspectors—21 fewer than in 2020—and internally reassigned 14 federal workers to inspector positions, according to agency numbers.

The 750 inspectors include 436 safety officers whose training focused on physical hazards, 252 industrial hygienists who focus on health hazards, and 62 engineers.

If OSHA can’t boost its inspector numbers, the agency should consider changes to how it selects job sites for inspections and conducts the checks, Fairfax said.

When OSHA had about 1,600 inspectors in the late 1970s, the agency had the capacity to conduct comprehensive inspections of employers, Fairfax said. Now with inspector force half the size, the agency may have to target employers with recent poor injury or illness rates and focus on the most hazardous aspects of jobs instead of every facet of a work site.

(Updates with comment from OSHA at seventh and eighth paragraphs.)