Federal inspections targeting workplace Covid-19 hazards have increased in many southern states in recent months, while declining in the Northeast and Midwest, reversing a pattern from earlier in the pandemic.

In most southern states, including Texas and Louisiana, the Occupational Safety and Health Administration conducted more inspections from May 1 through July 13 than during the same period a year ago, according to a Bloomberg Law review of the most recent enforcement data the agency would provide.

Inspections in Texas registered a 171% boost—57 from May through mid-July this year compared with 21 during that time in 2020. In Louisiana, there were 12 inspections during the span, up from seven in 2020, and seven in Mississippi, two more than during the same stretch in 2020. There were five in Oklahoma, compared with none during that time in 2020. Florida had a slight decline—22 last year and 20 during this year’s stretch.

Inspections are increasing in states with low vaccination rates at a time when the highly contagious delta variant is fueling a rise in Covid-19 infections and hospitalizations. But OSHA said its new emphasis program targeting Covid-19 high-hazard workplaces is driving up inspections.

Unlike last year, when OSHA often needed a worker complaint or fatality report to begin an inspection, the nationwide enforcement initiative has enabled OSHA to launch an inspection if it believes the business is in a high-risk industry. 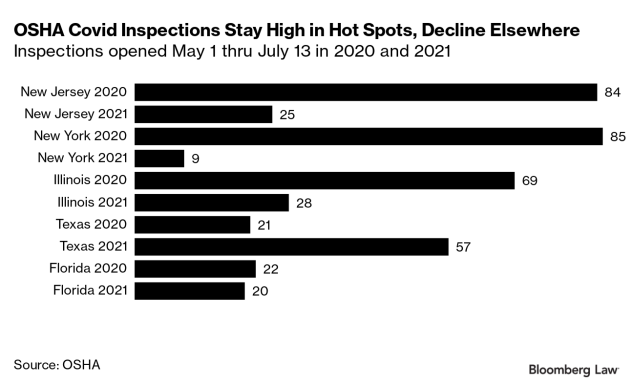 Covid-19 inspections in northeastern states declined during the period because there were fewer complaints and work-related fatalities, the agency said in a prepared response. OSHA said it expects the emphasis program inspections will increase as inspectors complete training and wrap up open cases.

Of the 57 inspections of workplaces in Texas, 47 were attributed to the Covid-19 emphasis program. In Florida it was 11 of the 20 inspections.

The program spurred 43 of the 55 inspections during the period in Alabama, Arkansas, Georgia, Louisiana, Mississippi, and Oklahoma.

The OSHA numbers didn’t include Kentucky, North Carolina, South Carolina, and Tennessee. Those state have their own workplace safety agencies.

The enforcement data provided by OSHA didn’t detail whether inspections prompted the agency to file citations against the employer. OSHA has up to six months to issue a citation from the start of an inspection.

The rising number of inspections in southern states comes as vaccination rates in most of the states remain low.

In Texas, 43.9% of the population was fully vaccinated as of Aug. 1, according to Bloomberg’s vaccination database. The rates in Georgia, Alabama, Louisiana, Mississippi, and Oklahoma were all 40% or less, with Mississippi the lowest, at 34.5%.

When OSHA officials were asked if the low vaccination rates contributed to the rise in inspections, they didn’t draw a link.

“OSHA continues to monitor trends in COVID-19 infections and deaths as more of the workforce and the general population become vaccinated and the pandemic continues to evolve,” the agency said in a statement.

The OSHA data also showed inspections declined in states that were Covid-19 hot spots a year ago.

The recent inspections in those states were triggered by follow-up site checks, referrals from other agencies, fatality and hospitalization reports, and the emphasis program, enforcement records showed.

Those states all have higher vaccination rates than their southern counterparts, with New York at 57.2% of its population fully vaccinated as of Aug. 1; New Jersey, 58.5%; Illinois, 48.6%; and Wisconsin, 51.8%.