One of President ‘s first priorities in office, sweeping legislation to carve a path to citizenship for farm workers and other undocumented immigrants, is stirring enthusiasm among Democrats and quick criticism from top Republicans.

The U.S. Citizenship Act of 2021 would let undocumented immigrants apply for temporary legal status, with immediate green card eligibility for select farm workers, among other provisions. Green card holders could apply for citizenship after three years. In a symbolic gesture, a bust of Cesar Chavez, the late farm workers’ union organizer, is prominent among the artworks in Biden’s Oval Office.

Only 51% of farm workers claim work authorization, according to the latest National Agricultural Workers Survey. 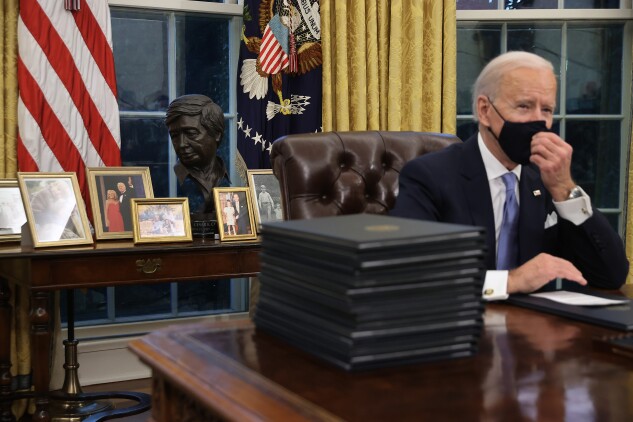 “It’s unfortunate that the first legislative plan that will be sent to Congress by President Biden, along with one of the first presidential actions, will prioritize help for illegal immigrants and not our fellow citizens,” McCarthy said in a Wednesday statement.

His home state produces more than 400 commodities, and accounts for more than 13% of the country’s total agricultural value, according to California’s food and agriculture department.

(N.Y.), the top Republican on the House Homeland Security Committee, sees a possible deal on immigration so long as House Democrats recognize they need GOP votes in the Senate. An immigration bill will never “get the far right” to sign on, but a bill that includes some border security, if not a wall, a guest worker overhaul and a fix for Deferred Action for Childhood Arrivals, the program protecting undocumented immigrants brought to the U.S. as children, could be the path to an agreement, he said.

“A lot of us have ag districts and we need this fix — they’re screaming for it,” Katko said about the guest worker visas.

He envisions a system that can be cut back if guest workers are taking jobs away from Americans, but right now, that’s not the issue, he said. Katko suggested that biometrics to ensure identity and issuing visas for workers to return at a certain date as they leave the country could help prevent the overstays that trouble some of his colleagues.

“There’s a deal to be struck there and we came close to striking it when we tackled it last time,” he said, referencing the effort former Rep. (R-Wis.) made as Speaker of the House that fell under pressure from the Freedom Caucus.

Several agriculture groups are lining up behind Biden’s proposal. A clear pathway to citizenship is “the very least we can do” for immigrants working in essential jobs during the coronavirus pandemic, National Farmers Union President Rob Larew said in a Wednesday statement.

“This bill is fundamentally different than what any other president has ever done in emancipating farm workers so they can escape pervasive fear and behave like free women and men,” Teresa Romero, president of labor union United Farm Workers, said in a Wednesday statement.

An outline of the legislation was released Wednesday, with the White House expected to send the bill to Congress next week.

Applicants must have been on American soil on or before Jan. 1 of this year.

The bill would switch the language in U.S. immigration laws from “alien” to “noncitizen.” It also would erase employment-based visa backlogs and let individuals with approved family-sponsorship petitions enter the country temporarily while awaiting green cards.

It would raise the number of green cards permitted by the Diversity Immigrant Visa program, a federal lottery, to 80,000 from 55,000.

The legislation requires the Departments of Labor and Homeland Security to create a commission to recommend changes to the employment verification process. It raises penalties for employers with labor law violations, aiming to protect migrant and seasonal workers.

The DHS secretary would see a funding increase from the legislation to roll out technology for expedited screening and contraband identification at ports of entry, along with plans for improved infrastructure. The measure strengthens the capacity to prosecute smugglers and traffickers, and would provide $4 billion over four years to address migration patterns, including assistance for El Salvador, Guatemala, and Honduras, the sources of many migrants beyond the southern Mexican border.

Republicans argue that lawmakers need to focus on alleviating the pandemic’s damage to Americans.

“Reports seem to indicate that President Biden is going to propose a path to citizenship for nearly 11 million foreign citizens as one of his first actions in office,” said House Agriculture Committee member (R-Ark.) in a tweet Thursday. “We have approximately 10 million Americans currently out of a job. Why not prioritize them, first?”