Newly confirmed labor solicitor Seema Nanda will be relying on years of federal agency experience as she confronts an expanding portfolio in an administration committed to a wide range of legally complex worker-focused initiatives.

Nanda, confirmed by a 53-46 vote Wednesday, was a U.S. Labor Department adviser during the Obama era, serving as chief of staff to the secretary and, briefly, as deputy solicitor following a stint in the Justice Department’s Civil Rights Division. Her peers say it’s precisely the pedigree needed to rise to the challenge as the DOL’s chief attorney and No. 3 official, overseeing the application of extensive employee-rights statutes and policies at a time when the White House is moving to increase demands on the solicitor’s office.

Nanda must meet the moment despite the constraints of an understaffed legal office that the department recently warned would be “substantially diminished” absent a funding boost from Congress later this year.

She will be counted on to rapidly adjust to a position—her first as head of a DOL subagency—that can assume significant autonomy to shape the administration’s labor agenda. Nanda inherits ongoing work on executive actions flowing from President ‘s task force on worker organizing, plans to rewrite overtime pay and construction wage rules, and weighty decisions on whether to investigate and potentially prosecute worker classification in the gig economy.

To avoid early stumbles, Nanda can tap into established relationships at the DOL, with both career staff and the numerous Biden-appointees with whom she overlapped during the Obama administration and in her work on Biden’s labor transition team.

“They know her and respect her, and she knows and respects them, and that is not always the case,” said Craig Hukill, who retired in 2016 after 36 years as a career attorney at the DOL’s Office of the Solicitor. “Some groups come in and they fight like cats and dogs from day one, and others develop the capacity to fight. I don’t think that will be the case with this crew. I think she’ll be ready to roll on day one.”

Nanda’s managerial skills will be tested as she takes control of one of the largest federal-agency legal shops, with more than 500 attorneys. It’s also among the few government agencies with independent litigation authority, giving Nanda the power to bring lawsuits enforcing some 180 federal workplace statutes without requiring Justice Department approval.

Plus, Nanda will serve a president who’s already tasked the DOL with implementing a series of executive actions to advance workplace rights, such as a $15 minimum wage on federal contracts, and whose administration is working with Congress to pass major infrastructure and social spending packages that would compound her office’s responsibilities.

“The potential portfolio for this solicitor may be the greatest it’s ever been,” said David Fortney, a former acting labor solicitor under President . 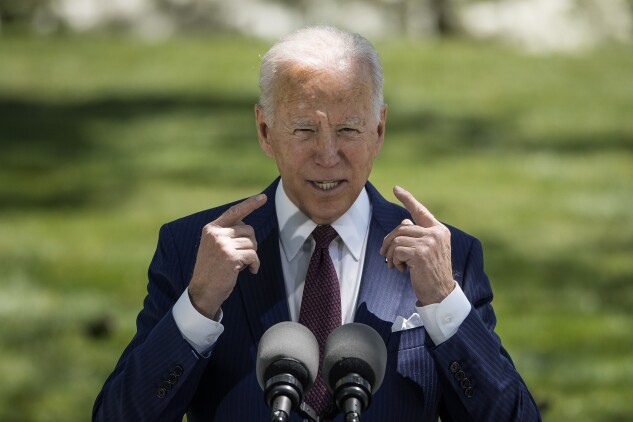 President Joe Biden addresses the media outside the White House on April 27, the day he signed an executive order to boost pay to $15 an hour on federal contracts.
Photographer: Drew Angerer/Getty Images

Fortney, now a private attorney for employers, said Nanda’s experience at the Labor and Justice departments “makes her well poised to be a very formidable solicitor, and one that potentially may be highly effective for this administration.”

Nanda must develop a litigation strategy with about 100 fewer employees than the office had near the Obama administration’s end, according to Office of Personnel Management data. The White House is asking Congress for a 14% hike in DOL spending that would include funding for 114 additional full-time employees at the solicitor’s office, known as SOL.

Those investments are necessary “to correct the erosion of SOL’s legal service capability resulting from unfunded increases in operational costs, and allow SOL to meet the greatly increased demand for SOL’s legal services,” the department stated in its fiscal 2022 budget request.

That message highlights the office’s role at the center of efforts by DOL regulatory agencies to craft new rules, ensure they’ll withstand a legal challenge, and draft interpretive guidance. Whether it’s developing a plan for the DOL’s racial and gender equity enforcement actions against federal contractors or executing the release of a long-stalled occupational safety rule for airborne infectious diseases, Nanda will be among a short list of top department decisionmakers.

Nanda’s experience goes beyond federal service. After leaving the Obama administration, she was chief executive officer of the Democratic National Committee. Progressive advocates are also excited about her civil rights background; she spent more than a year as a vice president at the Leadership Conference on Civil and Human Rights.

Her earlier work at the DOJ’s Civil Rights Division and, before that, as a supervisory attorney at the National Labor Relations Board, gives her “a broader perspective to labor than will sometimes be brought with these new nominees,” as both of those agencies tend to overlap with the DOL’s legal jurisdiction, Hukill said.

Emily Martin, vice president for education and workplace justice at the progressive National Women’s Law Center, expects Nanda to “accomplish a lot through affirmative litigation that seeks to have a big impact.”

“I would expect her to be really attuned to how the right case, the right challenge can really galvanize attention within the employer community,” Martin added.

Past labor solicitors’ legacies have been defined in part by the mandate they were given by their top client, the secretary of labor.

In Nanda’s case, her boss, Labor Secretary , isn’t a lawyer and is new to federal service. “I think we can anticipate” this dynamic giving Nanda the ability to assume an outsized role, Fortney said.

Walsh’s job delves more into politics and stakeholder outreach, Fortney added, “but a strong solicitor can really help be the one that turns a lot of the gears.”