Some incremental progress has been made in the effort to bring equal pay to women in the workplace, but data indicate women of color still face certain inequities exacerbated by the Covid-19 pandemic, widening their respective wage gaps from last year.

Average hourly earnings for all workers picked up by 5.1% over the past year through June, according to the Labor Department’s June Jobs Report released July 8. The report concurrently showed that while the workforce participation rate for White women remained steady, workforce participation rates for Black women and women overall declined in the last month, underscoring the economic disparities often seen between different racial groups.

That echoes a similar pattern shown by the U.S. Census Bureau’s Current Population Survey data, which the National Women’s Law Center analyzed in a March report. While “Equal Pay Day,” the day at which women reach the same average annual wages as men earned in the previous year, was celebrated on March 15 with a nine-day jump forward from last year, the respective Equal Pay Days for women of color all decreased.

State efforts to fix these inequities often fall flat. A law in Mississippi that took effect July 1 has faced criticism from advocates and even the EEOC for providing broad defenses to employers and giving far fewer protections to workers than current nationwide laws.

Business leaders could take up the mantle to address equal pay in the workplace, stakeholders say.

Internal equal pay audits, for example, could identify and eliminate some of the problems associated with gendered and racial pay disparity, but evaluating a position’s starting rate is one of the most critical factors for them to consider, said Camille Olson, a labor and employment partner at Seyfarth Shaw LLC in Chicago.

“There’s sort of a statement that some people say—if you start low, you’re going to end low,” Olson said. “You have to look at those starting pay positions to determine if they’re appropriate and that you’re not paying women and men differently, or minorities and non-minorities differently.” 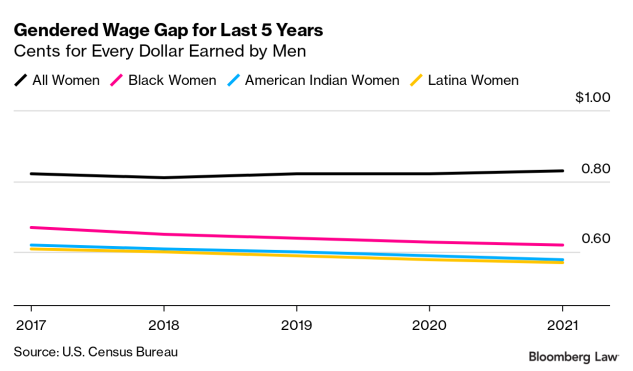 Workers who have found themselves to be desirable candidates in the tight labor market have fought unequal pay by leaving for other higher-paying jobs.

Most job moves see a standard pay increase of about 10% to 20%, but nearly a third of employees who left their company during the pandemic made over 30% more, according to a report by the Conference Board.

Salary history inquiries by hiring managers, however, could offset this edge and perpetuate the historically low wages that women receive.

“If you set pay in a new job based on what someone was earning in their last job, and you’re in an economy where women and people of color are typically paid less than White men, that system allows for pay discrimination,” said Emily Martin, vice president for education and workplace justice at the National Women’s Law Center.

Martin said the NWLC’s data suggest salary history bans “have really made a difference and have led to higher wages for women and people of color when they shift jobs, since employers can’t pay them based on what they were making in their last job.”

The EEOC in April teased a return of its controversial requirement that companies disclose pay data through the annual EEO-1 survey. The agency said in 2020 that it would halt the requirement, pending further study, after a court-ordered collection ended.

Seyfarth Shaw’s Olson testified against the EEOC’s proposed pay data requirement in 2016 when it was first introduced, stating it wouldn’t ensure that employees are paid fairly and would instead “impose enormous burdens and risks to employers who base complex compensation decisions on factors other than membership in a particular EEO-1 category.”

Among other security and confidentiality concerns, employers also found the requirements ineffectual because of the “aggregated data that they were providing,” said Sadé Tidwell, an associate attorney on labor and employment in the D.C. office of Seyfarth Shaw. The pay groups were too broad for employers to accurately report what was happening in the company, “allowing people to make misleading conclusions based on the data without further information,” she said.

However, “The reason that we need the EEOC to have that additional information is because, otherwise, we’re really in the dark when it comes to pay discrimination, because of the secrecy that surrounds pay,” Martin said. “And this is a really important way of shining some light on pay practices and giving the EEOC the tools it needs to enforce our pay discrimination laws.”

The types of jobs women traditionally have had also plays a role in their historically lower wages. Women are often pigeonholed into teaching, cleaning, and child-care jobs, according to Priscilla Murolo, a retired Sarah Lawrence College labor history professor.

“There’s still a lot of racial segregation in the job market,” Murolo said. If society deems that certain jobs are “female” jobs, “they are paid little because people imagine that they don’t really require much training,” she said.

The solution to this is twofold, Murolo said. First, employers should start paying higher wages for those perceived low-skilled jobs, and more school-aged girls should be recruited into apprenticeship programs, lending them the skills needed to acquire high-paying work in the future, she said.

To contact the reporter on this story: in Washington at jbrown@bloombergindustry.com

Jalen Brown
Reporter
Punching In: Trades Double Down on Getting Women on Board (1)
Women Once Again Make Up Almost Half of All US Employed: Chart
Silicon Valley Leaves Black Women Behind as It Closes Wage Gaps
Huge Pay Gap for Women Lawyers: What Firms Can Do
Five Ways a Tight Labor Market Could Affect Equal Pay Claims
Paid Leave, Child Care on Top of Wish List for Working Women (1)
© 2023 Bloomberg Industry Group, Inc.
All Rights Reserved