The Biden administration’s goal of cultivating business alliances to offset conservative resistance to its vaccination-or-testing rule for the private sector was evident in the employer-focused carveouts it provided.

So far, that strategy has produced mixed results.

Some business trade groups were considering filing a legal challenge as of Thursday evening. Other industry organizations were frustrated with the requirements but committed to helping member companies meet the compliance schedule, which begins Dec. 5 and ramps up Jan. 4. Another segment was clearly relieved the standard wasn’t as burdensome or expensive as they feared it would be.

The administration made important concessions aimed at staving off a broad industry revolt, including allowing companies to require unvaccinated workers to pay for required weekly testing and masks. That decision rankled many worker advocates, but it wasn’t clear whether it would be enough to keep industry groups from assuming their traditional role of courtroom foe when the U.S. Department of Labor issues progressive regulation.

“It’s hard to paint business groups with one broad brush at this stage,” said Matthew Haller, president and CEO of the International Franchise Association.

The group’s members, he said, “couldn’t be more thrilled” with the decision to separate franchisees from franchisors when calculating a business’s overall headcount. That will allow many franchised stores to pass under the 100-employee bar that triggers mandatory compliance.

But Haller’s group, like industry organizations across the economy, has questions about how enforcement will be handled. He said he hopes DOL’s Occupational Safety and Health Administration will provide further clarity because franchise brands want to “leave the political punching bag stuff for others who are frothing at the mouth to do that.” 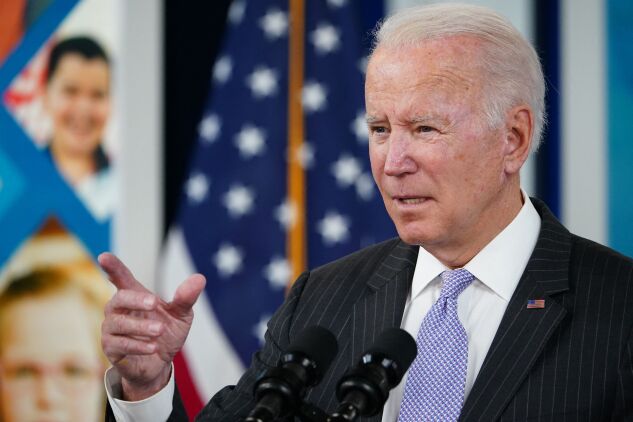 President Biden speaks at a Covid-19 vaccination event at the White House on Nov. 3.
Photographer: Mandel Ngan/AFP via Getty Images

The White House has recognized since announcing the initiative Sept. 9 that winning support from corporations and business groups would be necessary to lift vaccination rates and defeat the virus.

There was a public relations feel to the OSHA rulemaking, even while the administration girded for a blitz of litigation.

“I do think they attempted to assuage some of the concerns of the business community in the rule,” said Evan Armstrong, vice president of workforce at Retail Industry Leaders Association.

“The reality is, and we’ve always said this, it’s going to be a monumental undertaking for large enterprises that span the country.”

Armstrong said RILA is focusing on compliance, not litigation. He added the group appreciated provisions that let employers require employees to pay for testing costs and the 60-day runway before the testing option will be enforced. But he said he’s concerned that some requirements take effect in only 30 days, at the height of the retail holiday crunch.

While RILA, IFA, and several other lobbying organizations said they won’t be suing, some industry trade groups argue their members see obstacles that might make them likely contenders to bring a challenge in federal court.

Several companies got out of the gates quickly on Thursday, serving as plaintiffs in lawsuits brought by conservative legal groups. That includes the Wisconsin Institute for Law & Liberty representing two companies in the Eighth Circuit and the Buckeye Institute on behalf of a manufacturer in the Sixth Circuit.

The National Federation of Independent Business’s litigation arm is reviewing whether to sue. Other potential litigants include the American Trucking Association and the Associated Builders and Contractors—both of which represent sectors with worker shortages and higher rates of worker vaccine hesitancy.

Karen Harned, executive director of NFIB’s Small Business Litigation Center, said the administration won’t be able to count on her members to support the mandate.

“We’ve just heard from a number of members that do not like this and do not want it to go into effect,” Harned said.

She said NFIB represents numerous businesses that have between 100 and 500 employees, many of which lack in-house HR reps and will struggle to keep up with the rule’s recordkeeping requirements.

The administration promoted its efforts to ease the burdens for companies, packaging the rule with an accompanying list of questions and answers, a pre-recorded webinar, and a live stakeholder event Thursday to address ambiguities brought to their attention by employers.

Outreach to business groups such as the U.S. Chamber of Commerce has been a priority for DOL leadership since President Joe Biden ordered the rulemaking.

But as the administration formally publishes the rule in the Federal Register on Friday, it’s doubtful whether corporate heavyweights will to step forward to back the initiative despite the compliance challenges.

Although many companies wrestling over whether to voluntarily impose vaccine requirements were given cover by Biden’s announcement, industry anxiety has escalated since early September amid the supply chain crisis and worker shortages.

Some businesses are now stuck in the middle, unwilling to go public with opposition or support, even if they’re privately worried about the rule’s effect on employee retention or clinging to optimism that it will promote a safer workplace.

“To the extent that employers are pleased with the rule in that it gives them cover, I suspect that they are nevertheless going to not want to be out front about this and be vocal about any support,” said Robert Lian, a partner who heads the labor and employment practice at Akin Gump in Washington.

Corporate lobbyists will be pushing the administration for leniency in compliance.

Leniency already in the rule, particularly on passing testing costs off on workers, surprised and gave hope to some business advocates.

“My thought is it opens the door to further discussion with the administration as to additional changes and modifications,” said Roger King, senior labor and employment counsel at the HR Policy Association. “It’s clear the administration realized they had a practical and political problem on their hands, and made from their perspective reasonable attempts to respond to those issues.”