Companies generally have the authority to impose vaccine requirements and enforce them under the threat of termination. But rules related to the U.S. Food and Drug Administration’s sped-up procedure for authorization in a public health emergency—which state that individuals have the option to refuse the vaccines—gives some workers an avenue to sue over such firings, attorneys said.

“This is a really confusing set of legal sources,” said Dorit Reiss, a law professor at the University of California Hastings College of the Law who specializes in vaccines. “I don’t think it’s an actual limit on employers until a court says otherwise. I expect there to be court challenges.”

Although the law is unclear and untested regarding vaccines that received Emergency Use Authorization, it opens up the prospect of liability and contributes to a practical and legal landscape that disfavors employer requirements to take a Covid-19 vaccine that’s just rolling out to the public, lawyers said.

Even without that uncertainty, legal and public health experts recommended that most businesses would be better off encouraging and facilitating worker vaccination rather than mandating it.

The need to weigh workers’ health or religious objections to getting vaccinated, as well as the workplace implications of firing employees who refuse, can make mandates more trouble than they’re worth, they said.

“Whether to mandate the vaccine is obviously an industry-by-industry and employer-by-employer decision,” said Sharon Masling, a Morgan Lewis & Bockius attorney and former Equal Employment Opportunity Commission official. “In most cases, however, our clients are deciding to strongly encourage their employees to get the vaccine rather than require them to do so while the vaccine is under an EUA.” 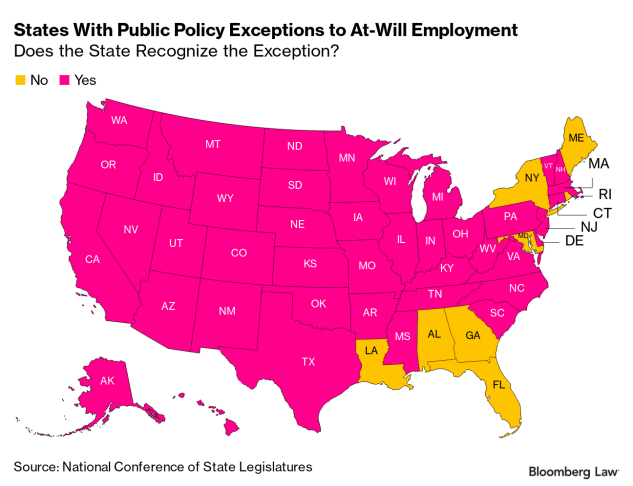 Employer vaccine mandates aren’t new, with some hospitals and other health-care providers requiring workers to take shots against influenza, rubella, and other infectious diseases. The scope of the coronavirus pandemic may prompt companies in other industries to consider requiring worker vaccination.

The legal authority to institute such mandates flows primarily from the at-will employment doctrine. In every state except Montana, private-sector employment is presumed to be at-will, meaning companies can fire workers for any legal reason.

But there are a few exceptions to at-will employment, including a “public policy exception” that’s recognized in 42 states and Washington, D.C., according to the National Conference of State Legislatures. That exception covers situations in which workers are fired for acting in the public interest, refusing to violate state law, reporting a violation of the law, or exercising a statutory right.

That last category—exercising a statutory right—could come into play when a worker is fired for not taking a Covid-19 vaccine, lawyers said.

The importance of the public policy exception ultimately turns on whether people have a statutory right to refuse the vaccine. The law is murky, but the rules for expedited FDA approval provide enough for a worker to at least make the argument, attorneys said.

The FDA’s Emergency Use Authorization permits it to sign off on drugs, vaccines, medical devices and other products on an expedited basis. But one notable caveat is the Food, Drug and Cosmetics Act’s instruction that those products must include information on the right of people to refuse them and the consequences of refusal.

The agency’s 2017 guidance on EUA products also notes that recipients must be informed about the right of refusal and any accompanying consequences.

The EUA on the Pfizer-BioNTech vaccine, for instance, has paperwork instructing health-care providers administering the vaccine to tell recipients that they can refuse the shot. The paperwork for vaccine recipients notifies them they can refuse without changing their standard medical care.

The FDA warnings boil down to a message that the government isn’t forcing an individual to take the vaccine, said Henry Perlowski, an attorney and head of management-side firm Arnall Golden Gregory’s employment practice.

“There could conceivably be a public policy exception,” he said. “But simply because the FDA is saying you don’t have to take it doesn’t necessarily mean that employers can’t say you have to take it.”

With the uncertainty in the law, the issue may well play out in some state courts across the country, with potentially varying interpretations of the law, attorneys said. The issue could go before juries in some cases.

“Think about how strong the anti-vaxx movement is and think about the people who will serve on juries,” said Michael Blickman, an attorney at Ice Miller who counsels employers. “The risk is significant that an employer could lose at trial and have to litigate at an appellate court.”

The lack of clarity in the law extends to the statutory language related to EUA approval. For example, the Food, Drug and Cosmetics Act’s section on providing notice about emergency use products calls them “unapproved,” even though they’re authorized for emergency use.

That language on the EUA status of the Covid-19 vaccines means that they’re still experimental, said Rob Fuller, an attorney at Nelson Hardiman, which specializes in representing health-care companies. No employer could force a person to participate in what’s essentially an extended drug trial, he said.

Employers that want to require vaccination could try to avoid the public policy exception by putting workers who refuse on unpaid leave rather than firing them, attorneys said. However, that might give rise to “constructive discharge” claims by workers who quit but say their employers effectively fired them, they said.

The bottom line is the uncertainty in the law related to mandating the Covid-19 vaccine means that helping workers get vaccinated is a safer path for many companies than requiring it, said Nancy Taylor, co-leader of Greenberg Traurig’s health-care and FDA practice.

“Our laws aren’t prepared right now to give complete legal advice that can insulate employers from legal risks,” Taylor said.