Buildings stand in the skyline of Philadelphia, Pa., on May 8, 2015.
Photographer: Victor J. Blue/Bloomberg via Getty Images

The EEOC’s annual September litigation blitz saw fewer new suits to close the fiscal year than in 2017 and 2018, bringing the agency more in line with prior years.

Overall, the Equal Employment Opportunity Commission filed 52 lawsuits for the month, compared to 86 in September 2017 and 87 in September 2018. That still beats the 31 September suits that were filed to close the agency’s 2016 fiscal year, and is closer to its September average in 2013, 2014, and 2015.

The findings are based on Bloomberg Law’s review of new lawsuits filed by the agency in September. Some of the lawsuits were brought against more than one company, and many include claims of more than one type of discrimination. 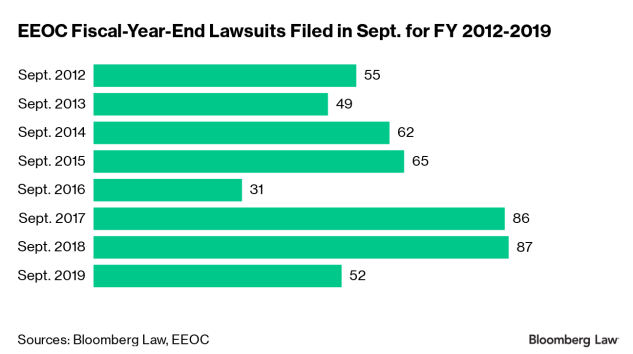 Thirty-four of the 52 September 2019 cases were brought against employers in five industries: retail trade, health-care and social assistance, transportation and warehousing, accommodation and food services, and construction.

As has been true of EEOC lawsuits for some time, workplace harassment, disability discrimination, and job retaliation were the most frequent targets of the agency’s latest litigation enforcement efforts.

The sexual harassment claims were down from the 21 the EEOC included in new lawsuits in September 2018 as part of the agency’s #MeToo-inspired crackdown. Six of the 2019 year-end suits included allegations of racial harassment, three alleged national origin-based harassment, and one asserted harassment based on religion.

LGBT bias allegations weren’t included in any of the new suits, as was also true at the end of the EEOC’s 2018 fiscal year.

The EEOC filed 37 of the new cases on behalf of a single employee or job applicant and 15 for two or more workers.

Retailers were the subject of nine of this September’s EEOC suits. That’s down from the 15 the agency filed against the industry in each of the previous two Septembers.

The seven new cases targeting health-care and social assistance employers were less than half of the 18 the EEOC hit that industry with to close fiscal 2017, when the industry led the pack. The accommodation and food services industry, which also was among the most frequently sued at 2017 and 2018 years’ end, again cracked the top five in September 2019. It tied for third place as restaurants, hotels, beverage distributors, and casinos were named in six of the new cases. 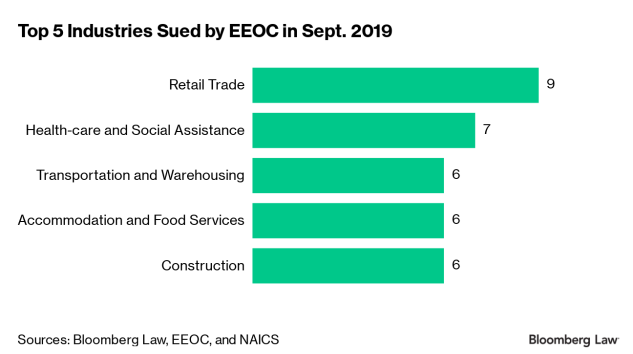 Also tied for third were the transportation and warehousing and the construction industries. Construction was the industry sued fourth-most frequently by the EEOC in September 2018, when it was named in seven suits to close that fiscal year.

The nine lawsuits filed this September by the Philadelphia district were less than the 15 new cases it filed in both September 2017 and September 2018, but still were enough to grab the top spot in the agency’s 2019 year-end litigation flurry. The district has field offices in Baltimore, Cleveland, and Pittsburgh.

The St. Louis district’s second-place finish this year comes after it failed to crack the top seven in last September’s year-end filings, while the Phoenix district office bettered its standing despite filing the same number of new cases as last September. Area offices in Kansas City, Mo., and Oklahoma are part of the St. Louis district. The Phoenix district includes a field office in Denver and an area office in Albuquerque, N.M. 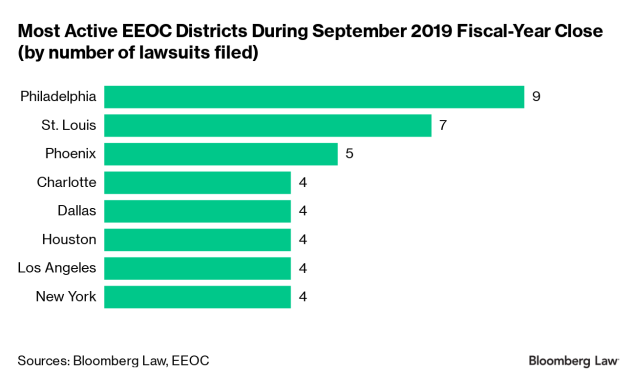 The EEOC’s Charlotte, Dallas, Houston, Los Angeles, and New York district offices were the next most active this September, bringing four new lawsuits each. The Charlotte district has three field offices elsewhere in the Carolinas and two in Virginia, and the Dallas district has outposts in San Antonio and El Paso. The agency’s New Orleans field office is part of its Houston district, and the Los Angeles district includes local offices in Fresno, Honolulu, Las Vegas, and San Diego. Area offices in Boston and Newark, N.J., and a local office in Buffalo, N.Y., are part of the EEOC’s New York district.