General view of Dallas/Fort Worth International Airport (DFW) on June 12, 2019,

Among the thousands of earmark requests sent to House appropriators are pitches for major airport renovations, a couple thousand dollars for a local police department, and various legislative priorities long left on the backburner after a decade-long ban on earmarks.

More than 300 House members took advantage of Democrats’ decision to allow local project funding proposals for fiscal 2022, sending 2,887 requests totaling nearly $5.9 billion, according to a list released by the House Appropriations Committee. Requests from 221 Democrats totaled $3.3 billion, while 106 Republicans asked for a combined $2.6 billion in earmarked funds, though those figures include some duplicates.

The requested total is less than the amount of money House appropriators are willing to set aside for earmarks. Appropriators set a limit of 1% of discretionary spending, which will likely be about $15 billion for fiscal 2022 for the House and Senate combined.

The total amount of requested funding is notably low, likely because members didn’t want to appear out-of-control the first year after ending an earmark ban first imposed in 2011, said John Hudak, deputy director of the Center for Effective Public Management and a senior fellow in Governance Studies at the Brookings Institution.

“As an individual legislator with an individual earmark, you don’t want to make that a grotesque earmark,” Hudak said in a Wednesday phone interview. “If all 435 members put in requests for $135 million and did that for all 10 requests, the committee is not going to take you seriously.”

The document paints a picture of varied priorities for different lawmakers, from major infrastructure projects to smaller requests for social service grants. It also shows that members have differing strategies for their requests, with some asking for pots of money greater than $100 million, and others asking for only a few thousand.

“In some places it’s money for airport improvement. In some places it’s for a YMCA, or for health-care facilities, higher education,” Michael Thorning, associate director of governance at the Bipartisan Policy Center, said in a phone interview Tuesday. “They definitely reflect the diversity of the congressional districts.”

The numbers also show substantial support among Republicans following a debate among conference members about whether to participate in the new earmarking process. The 106 Republicans who participated make up half of the 212-member House Republican Conference.

“That’s a strong showing,” Thorning said. “I’d imagine that over time, assuming the practice continues and assuming it’s done in a trustworthy way, we’ll see more members come onto the practice in the future.”

House Appropriations Chair (D-Conn.) has said she and the subcommittee leaders will sort through the requests to determine which ones are included in the spending bills. DeLauro is aiming for committee consideration of the spending bills in June with House floor votes in July.

The figures are based on the House Appropriations Committee’s publicly released Excel document listing all earmark requests. Bloomberg Government made one change to the document before calculating the totals, correcting a $1.5 million earmark by Rep. (D-Calif.) that was erroneously listed as $15.

Smallest request: $2,200 requested by Rep. (R-W.Va.) for a hydraulic vehicle lift for the Huntington Police Department.

Member who requested the most in total: Van Duyne, who requested a combined $354,534,598 among eight projects, mostly for programs at Dallas Fort Worth International Airport. 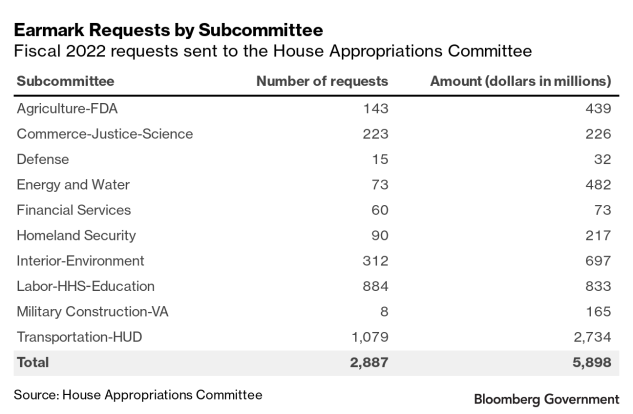 Most requests for a subcommittee: The Transportation-HUD panel received 1,079 requests totaling $2.7 billion, with both figures representing the greatest among the 10 subcommittees that received requests.

While infrastructure requests were unsurprisingly popular, the full list of earmarks also includes a significant number of social spending requests. After Transportation-HUD, the Labor-HHS-Education Subcommittee was the most popular among those seeking earmarks, receiving 884 requests totaling $832.8 million.

“I was a little surprised at the number of projects that deal with health issues,” Kevin Kosar, a resident scholar at the American Enterprise Institute, said in a Wednesday phone interview.

“Mental health, substance abuse, obstetricians for impoverished communities,” he said. “When you think of earmarks, you think of roads, water treatment, crumbling public facilities, but the health-care provision stuff, there’s a lot of that in there.”

To contact the reporter on this story: in Washington at jfitzpatrick@bgov.com

To contact the editors responsible for this story: at zsherwood@bgov.com; at mross@bgov.com