A cyclist rides past the U.S. Department of Labor building in Washington, D.C., in August.
Photographer: Erin Scott/Bloomberg

While the DOL’s Office of Federal Contract Compliance Programs hasn’t announced new litigation under Biden, the way its investigators are carrying out their mission has clearly changed—a trend that more than a half-dozen management attorneys said was evident soon after Inauguration Day.

The contractor watchdog’s audits are now more thorough, investigators’ followup questions more probing, and there’s been a renewed emphasis on rooting out pay discrimination, the practitioners said. During the Trump era, the office’s enforcement strategy was more geared toward proactive compliance to aid businesses, with deeper-dive audits less frequent. The office sued federal contractors on just three occasions over the entire course of the prior administration.

“They seem to be very deliberate and thoughtful,” said Leigh Nason, an Ogletree Deakins shareholder in South Carolina who co-chairs the firm’s group that works on affirmative action and OFCCP compliance. The agency’s new approach isn’t hostile to businesses or non-conciliatory, she said, but more intense, and with a renewed focus during audits.

The change, several practitioners said, reflects the impact of OFCCP Director Jenny Yang, a workplace civil rights veteran. The office’s top role doesn’t require Senate confirmation, which allowed Yang to take over on Jan. 20 and immediately start to reorient the enforcement program—well before Labor Secretary was sworn in on March 23.

Yang, who served on Biden’s transition team for labor-focused agencies, led the U.S. Equal Employment Opportunity Commission during the Obama administration, where she directed initiatives aimed at closing racial and gender pay gaps.

“She’s able to hit the ground running in a way, perhaps, other administrators cannot, because of her breadth of experience,” said Marilyn Fish, a partner with Bryan Cave Leighton Paisner in Atlanta.

Management attorneys and agency observers had expected Yang to shake things up, but the big question is how her emphasis on enforcement may translate into legal action.

Yang, in a prepared statement, didn’t promise a flurry of new litigation, but said the office “has powerful authority to ensure equal employment opportunity for workers nationwide.”

“Workers across the country are facing unprecedented economic challenges and high rates of job loss. When we identify violations during our compliance evaluations, we are committed to strong enforcement,” Yang said in an emailed statement Thursday. “We look forward to working with contractors to ensure they have the policies and practices in place to expand economic opportunity for underrepresented workers.”

The Obama administration was much more active than its successor in pursuing legal action against federal contractors, suing at least six companies just in the week before former President Donald Trump took office.

The OFCCP, which randomly audits federal contractors for compliance with workplace anti-bias laws and affirmative action obligations, sued a total 11 contractors in fiscal year 2017, but all of those cases were filed before Trump took the helm. The office bases its case count on the fiscal year, beginning Oct. 1. 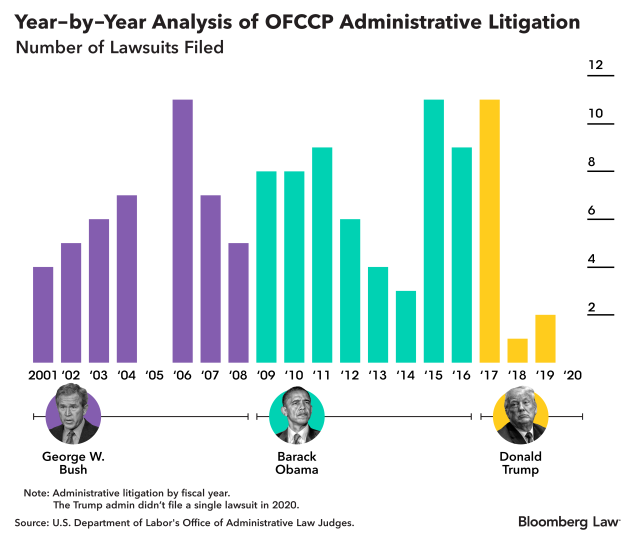 Practitioners shared anecdotal experiences of interactions with OFCCP officials on behalf of contractor clients since Biden took office, and all declined to provide specifics because of privacy sensitivities related to ongoing audits.

Clare Draper, a partner with Alston & Bird in Atlanta, said the agency’s information requests during audits, for example, have become more onerous. That’s a clear shift from the Trump administration’s strategy, he said, which entailed finding “the least intrusive or burdensome ways to gather information.”

The office has also been more intentional in its efforts to zero in on specific points during the employment process when a worker may have faced discrimination, Draper said.

“At least in several audits, there has been more emphasis on breaking down the employment processes by steps,” he added. “I just didn’t see much of that in the Trump administration.”

Attorneys also shared instances in which investigators revisited tentative agreements that had been brokered amid auditing during the later stages of the Trump administration, or in audits that had been in a holding pattern.

“Since Biden’s inauguration, OFCCP has revived long-dormant audits for several of the contractors I represent,” said attorney Mickey Silberman, who represents federal contractors in OFCCP matters.

Annette Tyman, a partner with Seyfarth Shaw in Chicago, said the OFCCP walked back previously agreed upon deals on at least one occasion, but she added that she wasn’t sure whether the move could be attributed to Yang’s leadership, or whether individual regions were shifting tactics.

Some changes have been declared publicly, as in a March 2 announcement that the office would roll back previously scheduled “focused reviews.”

That Trump-era initiative sought to review federal contractors with singular, specific areas of the law in mind, rather than wide-ranging audits. Departing from that practice would allow the office to “more thoroughly evaluate contractors through the strategic allocation of limited agency resources,” according to a March 2 statement.

Compensation practices is another area where attorneys say they’ve observed a new direction. Auditing for compliance with equal-pay laws has long been a top enforcement priority for the office, but the way its investigators are probing for information has changed.

“OFCCP has followed up in each audit with significant new data and document requests and has made clear it is doing a deep dive into potential pay discrimination,” Silberman said in an email, referencing multiple newly-revived audits. “I expect that trend will accelerate significantly in current and future audits now and during the next few years.”

Over the past year, the OFCCP has settled allegations of compensation discrimination with Google, JPMorgan Chase & Co., and Deloitte.

Draper said it was too early to tell in audits involving his clients where Yang was headed with pay-bias enforcement.

“You really need to start being very vigilant in documenting starting salaries, and why they are what they are,” Fish said. “When you’re looking at pay discrepancies, it sometimes goes back to how pay was set when the individual was hired.”