Senate Minority Leader is threatening votes on several Republican-backed labor bills in retaliation for Democrats’ current debate about changing Senate filibuster rules, a move that could bring to lawmakers’ attention two complex labor issues that are stagnant inside the Capitol.

McConnell (R-Ky.) used a Senate privilege known as Rule 14 to place more than a dozen bills directly on the Senate calendar for consideration.

Senate Majority Leader (D-N.Y.) called them “gotcha bills,” because they showcase partisan divides and can pressure Democrats who differ with their party’s views on certain issues. The list of bills also could be viewed as a preview of the types of measures Republicans could put on the Senate floor if they gain control of the chamber and there isn’t a filibuster. 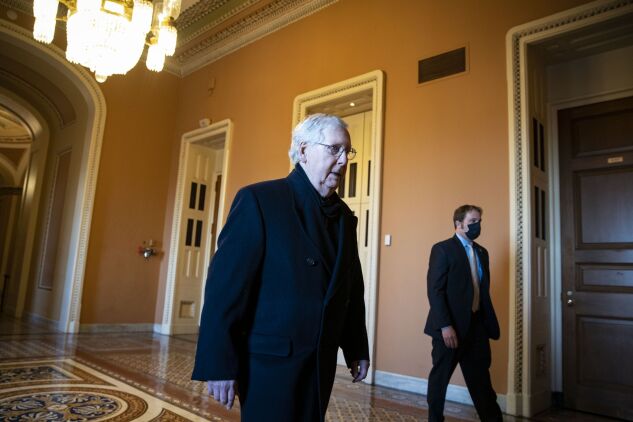 McConnell’s list includes a federal “right to work” proposal, (), and an action “to clarify” the circumstances under which businesses may be jointly liable for workplace decisions made by franchisees or contractors ().

Also up for consideration is a bill () to invalidate an emergency rule requiring large employers to ensure their workers are vaccinated against Covid-19 or regularly tested for the coronavirus. That rule, from the Occupational Safety and Health Administration, is currently undergoing U.S. Supreme Court consideration.

Rule 14 allows items to bypass committee debate, where senators can object to the legislation or amend it. McConnell’s strategic move to put the bills on the Senate calendar means they could come up for a vote at any time.

The labor measures are part of McConnell’s threat against Schumer to force votes on Republican-backed bills if the New York Democrat proceeds with changing the Senate’s filibuster rules to advance voting rights legislation.

VIDEO: Our comprehensive guide to how many votes are needed for almost any scenario in Congress.

The term “right to work” relates to mandatory dues for private-sector employees in unionized workplaces. More than two dozen states permit workers to opt out of the payments. The others require all employees to pay the fees to support their share of collective bargaining costs if they’re covered by the contract, regardless of whether they are union members.

Unions say employees in “right to work” states can receive union benefits without paying for them.

During the Trump administration, for example, a Republican majority at the National Labor Relations Board largely shielded companies from liability faced by their franchisees by narrowly defining an employer as the entity directly making business decisions for workers.

At the U.S. Labor Department, the Trump administration enacted a joint-employment regulation that favored businesses, but it was rescinded after Biden took over.

To contact the editors responsible for this story: at fjohnson@bloombergindustry.com; at jlauinger@bloomberglaw.com