Striking workers picket outside of the John Deere Davenport Works facility on Oct. 15, 2021 in Davenport, Iowa. More than 10,000 John Deere employees, represented by the UAW, walked off the job Oct. 14 after failing to agree to the terms of a new contract.
Photo by Scott Olson/Getty Images

Members of the United Auto Workers union rejected a deal with , extending a nearly three-week-long strike and illustrating the growing willingness of U.S. workers to hold out for better terms.

The second rejected deal offered substantial improvements over one that workers turned down before going on strike, and included larger wage increases, no new tiers to retirement benefits and a signing bonus of $8,500. Shares of Moline, Illinois-based Deere were down 5% at 1:16 p.m. in New York on Tuesday.

The wage increase offered at 14 Deere facilities was larger than nearly a dozen other collective bargaining agreements the UAW has negotiated since 2018, according to Bloomberg Law’s database of labor contracts.

“Thirty five years ago, workers at Deere lost a lockout and took a deal that froze and reduced wages,” said University of Chicago historian Gabriel Winant. “Today they rejected an offer that starts with a 10% raise. It’s the biggest downward shift in the economic balance of power in my lifetime.”

Some 10,000 Deere employees -- about 14% of its global workforce -- went on strike on Oct. 14 for the first time since 1986, having rejected a prior deal that called for a 5% to 6% wage increase for the first year. The world’s biggest farm equipment maker has kept its factories running, using salaried employees. The company said the focus has been operating parts depots and its parts distribution center to ensure farmers can complete their harvest season. 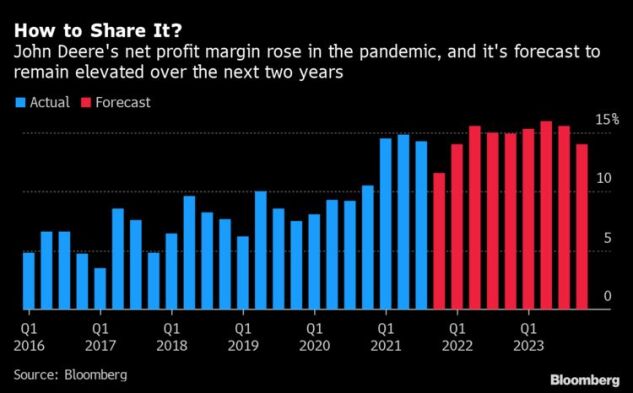 The strike comes as supply chain snags for semiconductors and other parts are already causing turmoil at a time of peak demand for tractors during the U.S. harvest. The consensus of analysts’ compiled by Bloomberg shows the company will report $10.6 billion in net sales from equipment operations when it reports fiscal fourth-quarter earnings Nov. 24.

“By a vote of 45% yes to 55% no, UAW John Deere members voted down the agreement this evening,” the union said in a statement late Tuesday. “The strike against John Deere and Company will continue as we discuss next steps with the company.”

Production and maintenance employees at 12 plants rejected the agreement, while workers at parts facilities in Denver and Atlanta approved a separate agreement with identical economic terms, the company said in a statement.

“Through the agreements reached with the UAW, John Deere would have invested an additional $3.5 billion in our employees,” Deere said. “With the rejection of the agreement covering our Midwest facilities, we will execute the next phase of our Customer Service Continuation Plan.” 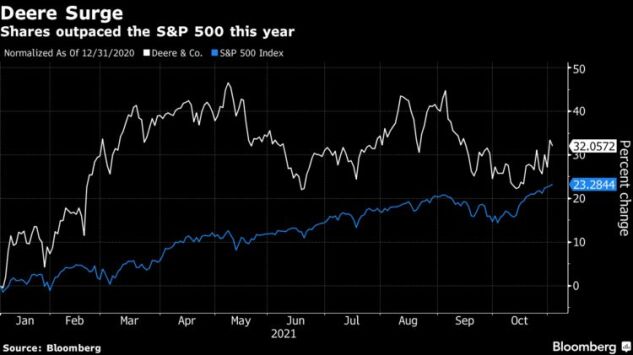 The company’s existing “two-tier” compensation system, in which workers hired since 1997 receive less generous benefits than those who started working there earlier, has been a sticking point for many employees, and would not have been abolished by the tentative agreement.

Deere’s much-improved contract offer, and its employees’ choice to reject it, reflect workers’ increased leverage and heightened expectations at a moment of tight labor markets and heightened political focus on “essential workers.”

“The Deere strikers and others may be gaining a new awareness of their leverage in the current labor market, and that the time to act is now,” said Chris Rhomberg, a sociology professor at Fordham University. “The stakes are high, but a victory for the union in this strike can help re-shape the terms of the post-pandemic economy.”

The number of U.S. workers on strike could grow substantially in the coming weeks if some of the tens of thousands of Kaiser Permanente healthcare workers who’ve authorized work stoppages walk off the job, or if film and TV workers follow their Deere counterparts’ lead in rejecting tentative deals negotiated by union leaders.

While the current labor market has strengthened workers’ hand and weakened the threat of permanently replacing striking workers across the board, employees have particular leverage in those sectors where strikes can seriously disrupt or halt production.

That includes the International Alliance of Theatrical Stage Employees (IATSE) members slated to vote in the coming weeks on tentative deals reached with film and TV producers days before a planned strike, and the West Coast International Longshore and Warehouse Union members whose contracts expire next summer, as well as the Deere workers.

The Deere strikers’ leverage rests “on the times, but also on their ability to shut down production,” former Communications Workers of America President Larry Cohen, who now chairs the advocacy group Our Revolution, said Sunday. “You can’t do that everywhere - it’s harder at a Kellogg’s where they are importing stuff.”

To contact the reporters on this story:
in Palo Alto at jeidelson@bloomberg.net;
in New York at jdeaux@bloomberg.net