A waitress takes takes orders at a restaurant in Washington, D.C. in 2018.
ANDREW CABALLERO-REYNOLDS/AFP via Getty Images

District of Columbia voters’ approval to end the subminimum wage for tipped employees highlights the momentum that worker advocates say could help them spread similar wage-law changes across the US even as the restaurant industry pushes back.

D.C.’s Initiative 82 passed on Election Day with 74% of the vote—a notable jump in support from the 55% approval that a similar ballot measure received in 2018 before the D.C. Council repealed it. No such repeal is expected this time around, and the new law will gradually phase out the tip credit and require businesses to pay tipped workers the full minimum wage plus tips starting in 2027.

Despite a decades-long fight over the issue, the D.C. vote is one of few wins for the tip credit’s opponents in recent years. Michigan is another, where the tip credit is tentatively set to end next year alongside a court-ordered increase in the minimum wage, pending the outcome of litigation over those measures.

But advocates such as Saru Jayaraman of One Fair Wage say the pandemic and the tough labor market that followed have changed their prospects for ending the two-tier minimum wage system for tipped workers. She’s targeting 25 states—including Colorado, Connecticut, Illinois, Maryland, Massachusetts, and New York—to enact legislation by 2026.

“This wage structure was created in emancipation and has been around for 160 years,” Jayaraman said. “We’re experiencing a once-in-a-nation’s-history moment where workers by the millions are rejecting subminimum wages and poverty wages.” 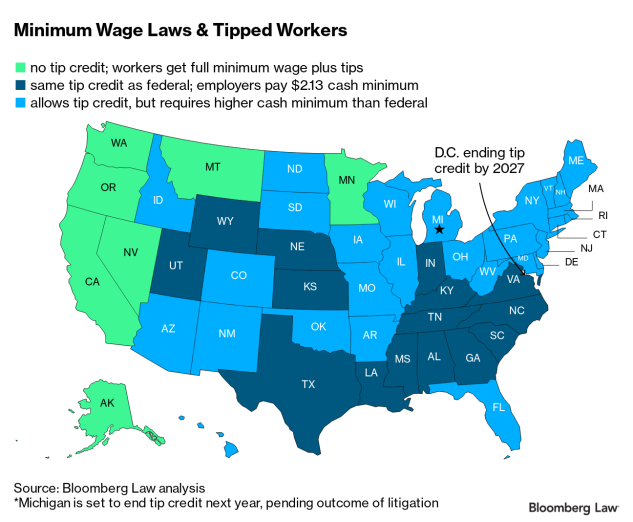 Many restaurants—Jayaraman has counted 5,000 across the country—have begun paying servers and bartenders a base wage that matches or exceeds the standard minimum wage plus tips, because they’ve struggled to attract enough workers at the lower wages they paid pre-pandemic, she said.

In D.C., current law lets businesses pay tipped workers as little as $5.35 an hour if they earn the full minimum wage of $16.10 when including tips.

Policy action around the tipped minimum wage, not unlike the standard minimum wage, is likely to remain at the state and local level for the next few years. The US House passed a federal bill to raise the national minimum wage and end the tip credit in 2021, but it didn’t win enough support to advance in the Senate, which Democrats narrowly control.

The phasing out of the tip credit will be a hard pill to swallow for restaurant operators in D.C., as well as any other state that opts for similar changes to their wage law, said Sean Kennedy, executive vice president for public policy at the National Restaurant Association.

“Restaurant operators are going to have to decide what kind of changes they’re going to make” to offset the higher payroll expenses, he said. “Those changes are going to come at a cost.”

The changes could mean higher menu prices, fewer workers or fewer hours for those workers, or some restaurants closing altogether, Kennedy said.

The restaurant association is a major lobbying force against any local, state, or federal proposals to increase minimum wages or end tip credits. It campaigned unsuccessfully against the D.C. measure, but had better luck in helping defeat a broader minimum wage proposal in Portland, Maine, that included a provision to end the tip credit.

Restaurants in states without tip credits, including California, have figured out ways to make the business model work, and restaurant customers there still routinely tip their servers 20% of the bill, said Ryan O’Leary, the head of Better Restaurants DC and lead backer of Initiative 82.

“It isn’t uncharted territory. It already exists in seven states, soon to be eight states,” he said.

Pandemic-related business shutdowns in 2020 hit restaurant workers especially hard, according to Jayaraman and O’Leary. Many of those workers didn’t have enough previous income to qualify for unemployment insurance, and then business was slow and tips were low when they returned to their jobs.

“The breaking point was being asked to enforce Covid protocols” on the same customers who provided the bulk of their pay via tips, Jayaraman said. More than 1 million restaurant workers have left the industry, she added.

The D.C. Council isn’t expected to repeal Initiative 82 as it did with the measure’s predecessor in 2018, O’Leary and Kennedy said. A majority of council members have said they won’t support a repeal. But both advocates said they expect the council might consider ways to revise the measure and they’re preparing to make their cases for and against softening the wage law changes.

Ten or 11 state legislatures are likely to consider bills raising the wage for tipped workers in 2023, Jayaraman said. This includes California, which already doesn’t allow businesses to use a tip credit to reduce their wage obligations, but she said her group wants the state to raise its minimum wage to at least $18 to help hourly workers handle cost-of-living increases.

Another three or four states could consider related ballot measures in 2024, she added. These potentially include Ohio, where advocates have been gathering signatures for a ballot petition related to increasing the minimum wage and ending the tip credit.

As for the tipped worker laws, it’s yet to be seen how far the momentum sparked by the pandemic will spread. D.C. could prove to be an outlier, Kennedy said.

“It’s notable that no major city in the country has eliminated the tip credit in over 20 years,” he said. “It puts an interesting spotlight on Washington, D.C.”

To contact the reporter on this story: in Atlanta at cmarr@bloombergindustry.com

To contact the editor responsible for this story: at mmuellerneff@bloomberglaw.com; Rebekah Mintzer at rmintzer@bloombergindustry.com