A worker disinfects surfaces inside a bar in Toronto, Ontario, Canada, on June 8, 2020.
Photographer: Cole Burston/Bloomberg

The nearly $50 billion commercial cleaning industry that has been on the front lines during the Covid-19 crisis is fighting to get recognition from state and federal policymakers.

But the slow pace of the latest legislation to address the crisis has frustrated those efforts, said Josh Feinberg, the president of the Cleaning Coalition of America and an executive at ABM Industries, a facilities management provider.

“It’s frustrating for those essential workers like us who are working and being relied upon. And yet, being sent out without any liability protection or any indication on which direction it will go,” said Feinberg in a phone interview.

The coalition has eight commercial cleaning industry members that represent almost half of the cleaning sector’s roughly one million-person workforce, which are present in virtually every setting outside residential households — working in retail stores, airports, hospitals and universities. 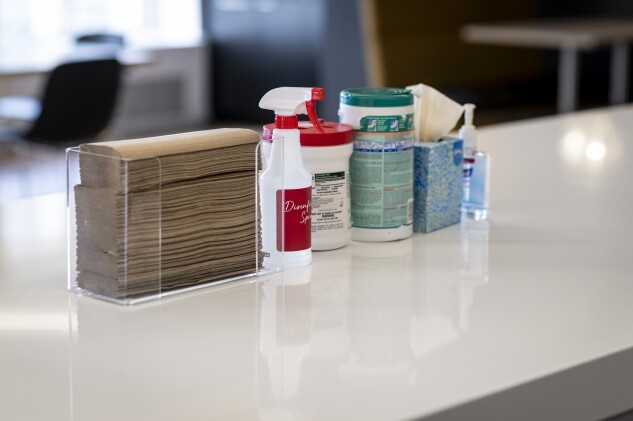 Cleaning products sit on a counter in a kitchen area at a JLL office in the Aon Center in Chicago.
Photographer: Christopher Dilts/Bloomberg

The group has had hundreds of meetings with congressional offices. It has been targeting House and Senate leadership offices and committees handling its most pressing issues, or as Feinberg puts it, “the ones who will be putting pen to paper.”

“We are really blitzing, but we’re blitzing in a targeted manner,” Feinberg said.

The group has also been talking with offices about a tax credit that would offset the increased cleaning costs associated with re-opening the economy, covering purchases of cleaning supplies or the hiring of cleaning crews.

Reps.(R-Ill.) and (D-Fla.) introduced legislation ) that would provide a temporary tax credit to businesses to ensure they are properly cleaned.

“This bipartisan legislation will ensure that businesses can take extra precautions during this uncertain time and keep our communities safe,” said LaHood in a May 29 news release announcing the legislation.

Other industry groups — including the National Restaurant Association and the American Hotel and Lodging Association — also support the proposal. Erin Hatch, a spokeswoman for the House Ways and Means Committee Democrats, did not respond to an inquiry about whether the credit could be included in the next virus aid package.

As lawmakers debate the next round of stimulus, Republicans and Democrats have been sharply divided over details surrounding liability protection provisions and increased funding to states and local governments. Action isn’t expected on that legislation until later this month as most lawmakers won’t return from recess until July 20.

Cleaners have struggled to get priority access to the supply chain of protective gear needed for workers to stay safe. As a result, companies are dealing with “third-tier and fourth-tier providers,” Feinberg said, which deliver cheaply made products, such as gloves so thin that they rip.

The competition for personal protective equipment (PPE) is fierce, with hospitals and senior living facilities among the other industries that have experienced a surge in demand for the products. Feinberg said. Cleaning companies have been largely left out of the conversations surrounding protective equipment, he said.

To contact the editors responsible for this story: at broth@bgov.com; at hrothman@bgov.com