Cities and states responding to nationwide protests sparked by George Floyd’s killing have begun trying to root out barriers to police accountability embedded in union contracts—and the first federal courts to weigh in are signaling the efforts could work.

The most significant could be in the District of Columbia, where U.S. District Judge James Boasberg dismissed the Fraternal Order of Police’s constitutional challenge to a law that eliminates all police discipline from collective bargaining. The judge turned aside the union’s equal protection claim, finding the city’s law rationally related to its interest in promoting police accountability.

Boasberg said collective bargaining has never been recognized as a fundamental constitutional right protected by substantive due process.

But William Jones, a University of Minnesota history professor examining police collective bargaining and violence for a project at Harvard University’s Labor and Worklife Program, called it a “very, very dangerous precedent to allow city administrators and elected officials control over the disciplinary process without any input from employees.”

In Connecticut, a federal judge last month refused to halt a state law that nullifies contract-based restrictions from releasing officers’ disciplinary records. The Oregon law hasn’t faced legal challenge as of yet; voters in Portland separately approved a ballot measure this month that gives an independent commission authority to discipline and even fire officers.

A New York federal judge in August mostly rejected a union bid to block a New York City plan to make a publicly available database of police, firefighter, and correctional officer discipline. That was made possible after the state Legislature’s June repeal of a ban on releasing their personnel records. Unions have appealed the ruling.

Several other states may consider paring back discipline provisions in police union contracts when their legislatures convene in 2021.

While too early to say how other courts might rule, Carl Takei, a senior attorney with the American Civil Liberties Union, called the decisions so far “a pendulum swing back to making police officers subject to rules that are similar to other public employees accused of misconduct.”

And the decisions “suggest the legislatures are in a strong position to act this way, if they choose to go in that direction,” said Alexander Colvin, a labor law professor at Cornell University. “If the police want to resist these, they need to do it through the political process more than through the courts.”

“Some of the low-hanging fruit—requiring body cameras, getting rid of no-knock warrants—have been passed,” said Rashawn Ray, a University of Maryland sociology professor who’s testified at Maryland and Virginia’s legislatures on ways to make police less dangerous to citizens. “But a key question is whether we’re talking about police reform that increases accountability, or are we just checking boxes?”

Police contracts sometimes contain provisions calling for arbitrations to adjudicate misconduct, special access to information about evidence and witnesses, and extended “cooling off” periods that give officers accused of legal misconduct a chance to review video footage and confer with lawyers and union officials before being questioned for potential criminal charges.

“That’s not the kind of protection that ought to be given to, especially, public officials who have the kinds of powers that police officers have,” the ACLU’s Takei said. “It’s certainly not a protection that we afford to any regular citizen accused of shooting somebody.”

Such protections also can appear outside a union contract and would not be changed by these court rulings, including those embedded in police “bill of rights” laws in 20 states. 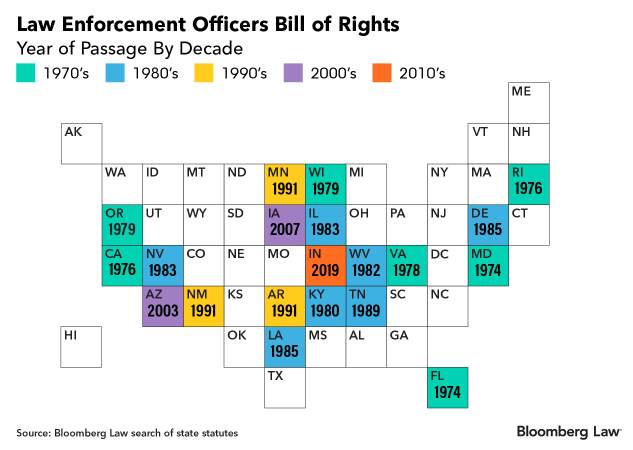 The Oregon measure calls on police departments and unions to agree on a “matrix” of punishments for various offenses. It also aims to make it more difficult for discipline to be reduced or overturned in arbitration.

The suit sought to halt a provision that made police officers’ disciplinary records available to the public. The union argued that the state—its employer—didn’t have authority to nullify parts of the current collective bargaining agreement, which kept complaints sealed in cases where allegations against an officer couldn’t be substantiated.

The union didn’t show that it was likely to prove the law violated the U.S. Constitution’s protections of contracts, which requires proving the statute wasn’t reasonable to boost law enforcement accountability and transparency, Haight said. The judge last week refused to block the law while the union appeals his ruling.

If the U.S. Court of Appeals for the Second Circuit finds that the Constitution doesn’t protect the CBA’s provision on prohibiting the release of unsubstantiated complaints against officers, then any other law nullifying a contractual protection would survive constitutional scrutiny, predicted Proloy Das, an attorney with Murtha Cullina who represents the union.

Council 4 now says it will ask the Legislature to roll back certain parts of the law, but hasn’t taken the idea of filing its own suit off the table. While the union is open to certain changes involving body cameras and implicit bias training, it wants lawmakers to remove a provision that would allow felony charges for police officers who fail to report excessive force by colleagues, said Troy Raccuia, the collective bargaining director for Council 4.

The union also objects to a provision that prevents officers from having punishments overturned through arbitration, a change that activists say is long overdue.

At the same time, having unique standards for police isn’t a new concept, making it less likely that the strategy will spill over to other sectors, said Colvin, the Cornell labor law professor.

Rolling back protective disciplinary procedures found in union contracts could be an effective means of reducing police misconduct, but it’s no sure thing, said Catherine Fisk, a workplace law professor at the University of California-Berkeley.

Success depends in part on the state. In California, for example, various protections found in union contracts are also codified in the state’s law enforcement officer bill of rights and civil service laws, said Fisk, who’s written about union bargaining and police misconduct.

“A lot of the public debate about police unions and police reform assumes the union is the problem, so if you get rid of it, then management will discipline cops for excessive force on discriminatory conduct,” she said. “Evidence suggests that police department management has not always been so eager. You have to be sure management really wants to discipline cops and make it stick.”

—With assistance from Andrew Wallender