A woman works at a laptop computer as a child plays with toys.
Photographer: Stefan Wermuth/Bloomberg via Getty Images

House Democrats, steeled by the pandemic, are eager to advance permanent paid leave legislation in tandem with temporary protections the Biden administration is expected to try to push through Congress in coming weeks.

Federal and state Covid-19 legislation provided for or expanded some paid leave benefits to more than 87 million Americans for first time last year, emboldening Democrats who have long sought permanent, job-protected paid family and sick leave legislation. Now the Democratic Party holds the political levers in Washington to enact those kinds of sweeping reforms, but there are signals that pre- and post-pandemic concessions could serve to impede their progress in a divided Senate.

Despite national support for framework legislation, the U.S. remains the only developed country in the world without some measure of paid family leave for private-sector workers; Congress has yet to act since it passed the unpaid Family and Medical Leave Act in 1993. Paid leave was thrown back into sharper legislative focus during the pandemic, when the choice between work and wellness became a matter of public health.

Paid child care and sick leave for some workers was put in place under the Families First Coronavirus Response Act last year, but the employer mandate expired in December. President ‘s virus recovery package promises more benefits for more Americans, but his $1.9 trillion proposal has already met Republican pushback, and its paid leave components would expire in September.

Restless proponents want a permanent paid leave solution to become law during Biden’s term. Republicans have blocked paid leave proposals in the Senate for years, but even employer groups that were once staunchly opposed are changing their tune in light of the Democratic control of Congress and the White House.

Underlying talks of a federal paid leave system is a steady stream of states and localities that have implemented programs of their own. Congressional Democrats say they applaud these measures, and that federal programs are intended to complement them. But large employers, particularly multistate operations, say they’re unnecessarily complex and contradictory.

Nine states and the District of Columbia have implemented some form of paid family and medical leave laws, according to the advocacy group A Better Balance, while 15 states and D.C. have laws for sick days or paid time off, according to the National Conference of State Legislatures. 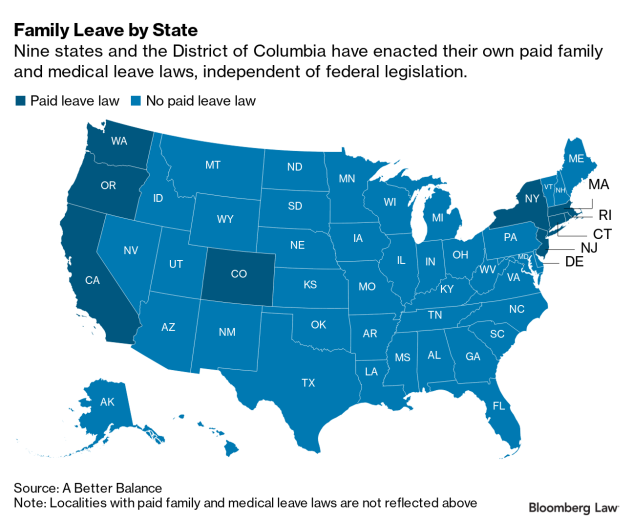 DeLauro said in a statement that she intends to reintroduce both bills during the 117th Congress.

“We are moving full steam ahead on both providing the American people with immediate paid sick and family leave and enacting a permanent solution to a problem that has existed long before the coronavirus pandemic,” she said. “Losing several weeks worth of wages in order to care for an ill loved one or the birth of a child—events which many of us would need to take time off for—is simply unacceptable.”

It’s likely the House will approve the FAMILY Act before temporary expanded paid leave would expire under Biden’s proposal, if it were to become law. The bill’s fate in the Senate remains murky; Republican lawmakers have split over paid leave provisions in the past, but temporary protections under FFCRA enjoyed bipartisan support.

Past versions of the FAMILY Act would create a fund to guarantee up to 12 weeks of partial income for workers to care for newborns or very sick family members. It would be funded by a payroll tax on employers, employees, and self-employed workers.

The FAMILY Act, which also would establish a new federal Office of Paid Family and Medical Leave, would take time to implement, said Vicki Shabo, a senior fellow of paid leave policy and strategy at the Better Life Lab, a part of New America, a Washington think tank.

“To create a national paid family and medical leave fund that pays benefits out will take time to stand up,” Shabo said. “The reason that you wouldn’t just want to do that through employers is that you want to create a system that applies to everyone no matter where they work.”

Republicans have balked at the FAMILY Act and the $80 billion the Congressional Budget Office estimated it would cost per year.

The Healthy Families Act would allow workers at businesses with more than 15 employees to accrue up to seven paid sick days a year, paid for by their employer. The CBO last scored that bill in 2007 and found that its impact on federal spending would be negligible, as sick leave would be covered by employers.

The Institute for Women’s Policy Research estimated that the total cost of implementing mandatory sick days would amount to about $20 billion in 2005 but that those costs would be offset by savings associated with a reduction in the spread of illness and increased productivity.

On Thursday, Democrats are expected to announce legislation that would give federal government employees 12 weeks of paid family and medical leave, capitalizing on their success in the 2020 National Defense Authorization Act, which granted 2.1 million government employees access to paid parental leave. 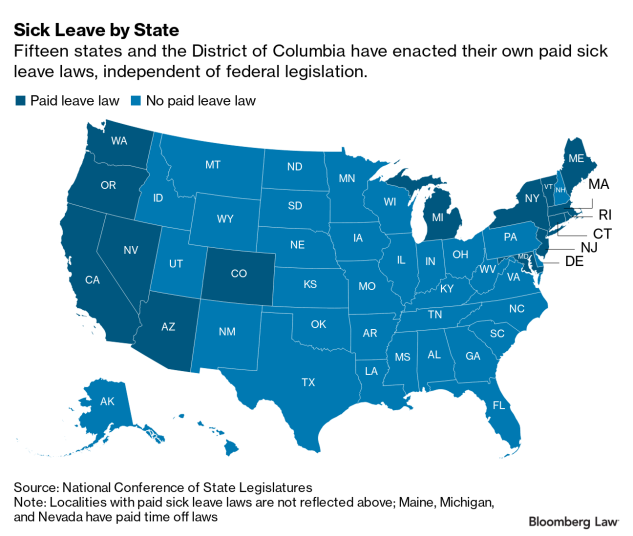 Counterproposals last session included Sen. (R-Fla.) narrow bill that would allow new parents to collect Social Security benefits early and receive smaller payouts at retirement. A bipartisan proposal by Sens. Bill Cassidy (R-La.) and Kyrsten Sinema (D-Ariz.) would allow parents to advance up to $5,000 of future child tax credits upon the birth or adoption of a child for bonding, reducing future credits by upward of $500 a year.

Both Republican and Democratic proposals for temporary paid leave solutions in response to the pandemic have included tax credits to stave off cost burdens on employers. A voluntary credit was the only element of paid leave that survived Congress’ most recent iteration of Covid-19 relief, and even Biden’s proposal would reimburse employers with fewer than 500 workers.

FFCRA paid an upfront, dollar-for-dollar tax credit to small and mid-sized employers mandated to provide sick and family leave. That credit was extended to March 31 under the $900 billion Covid-19 relief package and spending bill last month.

Tax credits need to be a part of future paid leave discussions, said Philip Voluck, a managing partner of a Kaufman, Dolowich Voluck LLP in Blue Bell, Pa., and co-chair of the firm’s labor and employment law practice group. The credit is a powerful motivating tool that can expand coverage without making any FMLA-style paid leave proposal unpalatable across the aisle, he said.

“At some point Covid’s going to be an afterthought, and the FFCRA will similarly be an afterthought,” Voluck said. “But in order to maintain safe workplaces as well as guard against any resurgence, employers need to do this. And I think you’ll find the obvious way to do this is through the FMLA.”