President Donald Trump speaks at the White House on Feb. 6, 2020 about his acquittal by the Senate in impeachment proceedings. A budgetary law at the center of the Ukraine funding scandal that led to the impeachment inquiry could fuel future partisan battles over the budget and agency-level spending.
Photographer: Al Drago/Bloomberg

Congress will likely reject many of the spending cuts in President Donald Trump’s new budget request, if recent history is any guide, but that doesn’t mean the Trump administration won’t try to take back some of those funds anyway.

Trump’s budget proposal for fiscal 2021, expected to be sent to Capitol Hill on Feb. 10, comes against the backdrop of a widening feud between the White House and Democratic lawmakers over the administration’s commitment to budget laws when those statutes conflict with political goals, such as making government smaller.

The clash, which centers on Congress’s constitutional prerogative to control spending, is likely to affect budget negotiations in coming months. That’s because one of the main budgetary laws Democrats and the independent Government Accountability Office are trying to enforce—the Impoundment Control Act of 1974—is at the center of the Ukraine funding scandal that led to Trump’s impeachment in the House.

Last month GAO issued a decision finding that Trump withheld military aid to Ukraine in violation of the law, which limits agencies’ ability to hold back from spending funds appropriated by Congress. But officials from the White House Office of Management and Budget defended their use of budget laws under Trump, contending that GAO decisions have changed over the years, previous administrations have disagreed with its findings, and the executive branch is not bound by its decisions.

“We disagree with GAO’s opinion,” OMB spokeswoman Rachel Semmel said in a statement. “OMB uses its apportionment authority to ensure taxpayer dollars are properly spent consistent with the President’s priorities and with the law.”

Separate from the controversy over aid to Ukraine, GAO is investigating whether OMB choked off foreign aid from the State Department, and it recently agreed to a request from a pair of Democrats to investigate how the National Labor Relations Board has accumulated millions in unspent funds. Democrats in the House are vowing to pursue a legislative check on the executive branch.

“The Budget Committee is pursuing legislation to provide much needed reforms that will protect Congress’s constitutional power of the purse,” House Budget Committee Chairman (D-Ky.) said just after GAO issued its decision on the withheld aid to Ukraine.

Impoundment Control Act violations are relatively rare, but Democrats and budget experts say recent Trump violations, coupled with the president’s antagonistic approach to the federal bureaucracy in general, could inject further partisan rancor and discord into this year’s budgetary and spending talks.

OMB officials, who requested anonymity to discuss their deliberations with Congress, characterized the violations found by GAO as part of the perennial give and take with the legislative branch, and nothing out of the ordinary. Steve McMillin, a former OMB deputy director in the Bush administration, agreed, saying OMB’s role, position, and inclinations have been reasonably consistent across administrations.

What’s different is previously the “political accommodation” path was used more often and more generously to resolve disputes with the legislative branch, said McMillin, now a partner of the US Policy Metrics research firm. Trump’s OMB is less inclined to yield in the interest of “comity between the branches” when it thinks it’s right, he said.

OMB General Counsel Mark Paoletta made this view clear in a Nov. 5, 2019 memorandum instructing federal agencies that GAO decisions are non-binding on the executive branch and that agencies are under no obligation to report an action it does not determine to be an Antideficiency Act violation. That budget law prohibits executive branch agencies from spending money in excess of congressional appropriations.

Paoletta’s memo came as GAO was pushing back against agencies for spending money they didn’t have during the 35-day government shutdown that ended in January 2019, resulting in multiple violations of the Antideficiency Act. That law carries civil and criminal penalties, enforced by the Department of Justice, although GAO in a report said it was unaware of anyone having been prosecuted for a violation.

Antideficiency Act violations have been far more common over the years—and, in fact, were higher during some years of the Obama administration than under Trump. GAO’s latest annual report found just nine violations in fiscal 2018, the first full fiscal year of the Trump administration. There have been an average of about 17 per year since fiscal 2005. 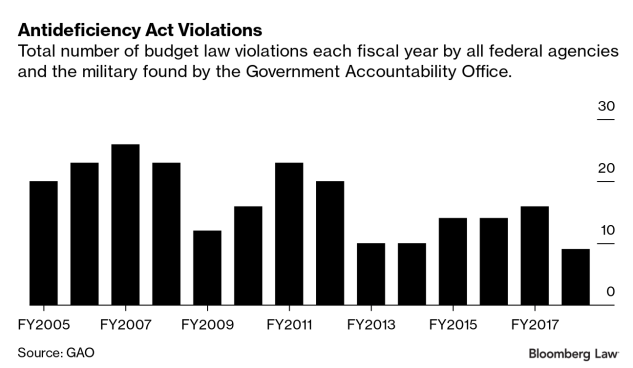 Other budget experts say the Trump White House has engaged in both legal violations and unusual budgeting practices.

Like previous administrations, Trump’s OMB has pushed to expand its budget authority, said Gordon Gray, director of fiscal policy at the American Action Forum, a conservative think tank. “And then layered on top of it, I think you have some pretty unique and, in my view, troubling departures from norms,” he said, pointing to last summer’s moves by OMB to stop or slow the flow of foreign aid late in the fiscal year.

Former President Gerald Ford would often send rescission requests—formal notices to cut funding—to Congress in an attempt to scale back government spending, but he was the last to do so until Trump, said Richard Kogan, senior fellow at the Center on Budget and Policy Priorities.

Unlike the Antideficiency Act, the Impoundment Control Act does not carry criminal penalties but instead allows GAO to bring suit to require an agency to fulfill its obligations. GAO has not pursued legal action against the Trump administration.

“This is a bigger problem of Trump’s lawlessness, not a particular problem with the budgetary law,” said Sam Berger, vice president of Democracy and Government Reform at the Center for American Progress and a former OMB counsel in the Obama administration.

If there’s a dispute with the president’s rescission and impoundment authority, then Congress should take him to court, Rep. Tom Cole (R-Okla.), a member of the House Appropriations Committee, told Bloomberg Law.

“There’s no question that the Congress has control of the purse—on the other hand I haven’t seen the president be irresponsible with the authority that he has,” Cole said. “At the end of the day though we do have the final authority here and we should protect it.”

One area where Democrats could dig in is if the White House requests funding to establish a new apprenticeship program at the Labor Department, known as the Industry-Recognized Apprenticeship Program. Last year, the Labor Department misused more than $1 million to finance the White House-directed program after repeatedly telling Congress that existing funding would not be spent on the initiative.

The National Labor Relations Board is another potential flashpoint. The board has been under-spending for years, reporting $3 million in funds left over at the end of fiscal 2018, according to Sen. Patty Murray (D-Wash.) and Rep. Rosa DeLauro (D-Conn.), the Democratic leaders of the House and Senate spending subcommittees with jurisdiction over labor issues.

The amount of leftover funds increased to $5.7 million by the end of fiscal 2019, at the same time NLRB has been cutting staff, the two Democratic leaders said in a Dec. 13, 2019, letter to GAO requesting an investigation. GAO in January agreed to look into the matter.

Acting OMB Director Russell Vought has responded to some of the criticism by questioning GAO’s credibility.

“Recently GAO flipped its position twice in the last few months. We wouldn’t be surprised if they reverse again. Regardless, the Admin complied with the law at every step,” Vought said in a Jan. 16 tweet, the day the Ukraine decision was released.

Vought was referring, in part, to a GAO decision from December 2018 to revise a 40-year-old legal opinion on the president’s rescission authority.

In its revised opinion, GAO found it would be a violation of the Impoundment Control Act for the president to withhold agency funds within 45 days of the end of the fiscal year, at which point the funds would expire. GAO previously said the act allows the president to temporarily impound funds for up to 45 days after requesting a rescission from Congress.

Meanwhile, Yarmuth and House Appropriations Chairwoman Nita Lowey (D-N.Y.) wrote to OMB last year, charging it with abusing the apportionment process so that the State Department and the U.S. Agency for International Development could spend only 2% of their foreign aid funds each day close to the end of the fiscal year. The GAO is still looking into the matter.

“It was another backdoor attempt to freeze funding, and possibly rescind it completely by running out the clock,” Yarmuth recently said from the House floor.

—Jaclyn Diaz contributed to this report.