A cashier rings up customers at the Food Town grocery store in August 2017 in Houston, Texas. The state has followed the federal minimum wage of $7.25 per hour since 2009.
BRENDAN SMIALOWSKI/AFP via Getty Images

A grocery store cashier who’s guaranteed $15 per hour in California can legally be paid $7.25 in Texas and 19 other states—a gap in state minimum wages that’s set to widen further in the year ahead.

California, the District of Columbia, and much of New York already require wages of $15 per hour or more. Massachusetts, and likely Washington state, will join them in 2023. And California Gov. (D) announced earlier this month that his state’s minimum wage is expected to rise to $15.50 next January, as an inflation-based adjustment.

On the other end of the spectrum, 20 states stretching from Georgia to Idaho don’t require employers to pay more than the federal minimum of $7.25 an hour.

“We are entering a period where people doing the exact same job in different states will have dramatically different standards of living,” said David Cooper, director of the Economic Analysis and Research Network, a project of the left-leaning Economic Policy Institute. “It stresses, in my mind, the need for some sort of intervention at the federal level to equalize this.”

Raising minimum wages nationally or in individual states to catch up to the likes of California could mean job losses or closures for small businesses. And the variation in government-mandated wages overstates actual income differences because labor market conditions have forced employers to increase wages, said Tim Goodrich, vice president of state government relations at the National Federation of Independent Business.

“The market is still driving up wages in those states” that haven’t raised their minimum wage, Goodrich said. “It’s good for workers, but it’s also pinching small businesses.”

Federal policymakers haven’t increased the nationwide minimum wage since 2009, leaving any action on minimum wage adjustments to local and state governments. President Joe Biden’s 2021 proposal for a $15 national minimum wage stalled in the Senate within the first few weeks of his presidency. His narrower executive order setting a $15 minimum for federal contractors faces ongoing legal challenges. 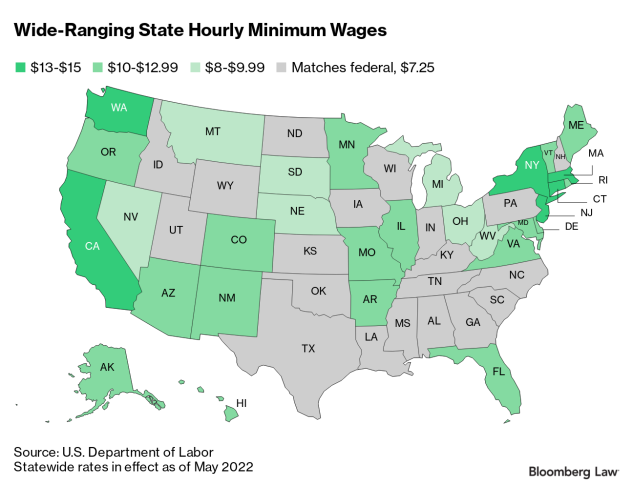 It’s been roughly a decade since the “Fight for $15” movement took off. Ten states plus D.C. have enacted $15 wage laws—although most of those are still phasing in the $15 minimum over several years. Labor officials have doubled down on that figure as the minimum they’re pushing for nationally, amid Republican proposals for a smaller increase of the federal wage floor to $10.

But a new standard could be emerging among Democratic state policymakers at $18 per hour or higher.

Hawaii would raise its wage floor to $18 by 2028 under legislation awaiting (D) signature, and a ballot proposal in California would ask voters to approve an increase to $18 there by 2025. The organizers of the California ballot proposal said earlier this month they’ve collected more than enough signatures to get it on the November ballot, and they’re awaiting verification by state and local officials.

Recently introduced legislation in New York also would boost the state’s minimum wages—which vary by geographic region—by indexing them to inflation, potentially pushing New York City’s minimum above $20 by 2025, according to the bill’s supporters.

“I think what Hawaii is doing is a good signal for the direction a lot of the bluer states are going to take,” Cooper said.

Aside from the effect of new legislation and ballot initiatives, 18 states plus D.C. already have laws calling for automatic annual increases based on inflation. Among those is Washington, where the current minimum of $14.49 is likely to surpass $15 next year considering the high inflation levels of 2021 and 2022 thus far.

While the higher minimum wages have been enacted mostly by Democratic-majority state legislatures, that isn’t always the case. In Republican-led Florida, voters in 2020 approved a ballot measure to gradually raise the Sunshine State’s minimum wage to $15. In Arkansas, Arizona, and Missouri—all states where the GOP controls the state legislature and governor’s office—voters have raised the wage floor through ballot initiatives, although not going as far as $15 an hour.

Lawmakers in much of the South remain reluctant to raise minimum wages above the federal floor—with Alabama, Georgia, Kentucky, Louisiana, Mississippi, North Carolina, South Carolina, and Texas all holding steady at $7.25 an hour.

“Maybe they don’t make as much in Atlanta as they could make in New York City, but obviously the cost of living is much lower in Atlanta,” he said.

The gap among states extends to other areas of worker protections, said Kristen Harknett, a professor at the University of California, San Francisco, who is also involved in research for Harvard’s Shift Project and the EPI wage tracker.

“Wages are not unique. We have a patchwork generally in this country,” she said, pointing to other policies that vary by city and state such as paid sick leave and employee scheduling laws. “There are a lot of holes in the labor law at the federal level that some localities have attempted to fill.”

Market-driven wage increases have boosted some hourly workers. But headline-grabbing announcements from companies such as Walmart and Target have overshadowed the fact that many other service-sector employers haven’t followed suit with higher starting pay, Harknett said.

“You can get a very skewed perspective if you’re just focusing on the announcements by a large company or a handful of large companies,” Harknett said. “What this misses is all the others that have not made similar changes.”