Federal unemployment benefits have been especially vital for Black Americans, who’ve suffered some of the worst job losses in the pandemic.

That argument is helping to sway some in Congress toward keeping the extra payments in place after next month’s deadline.

A wave of protests against racial injustice has shone a spotlight on disparities in the economy, like a Black jobless rate that continued to rise last month even as headline unemployment eased. 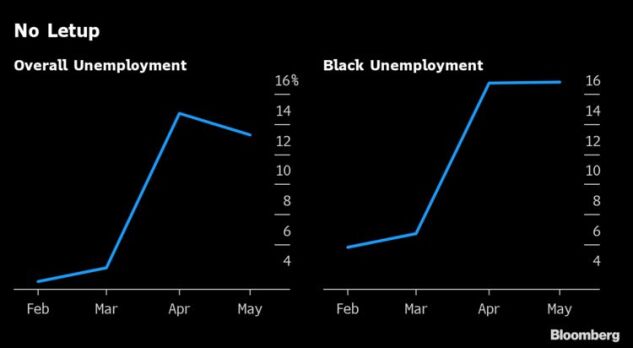 Early in the pandemic, Congress approved an extra $600 a week in federal unemployment benefits. They’re due to run out at the end of July -- one of a series of summer dates when crisis-era fiscal props are due to be removed, testing the economy’s strength.

Democrats want to maintain the safety net into 2021, and they’re pointing out that Black Americans -- who are historically slower to get rehired after a slump –- and other minorities will take a disproportionate hit if it’s allowed to expire. Unemployment among Latinos has also soared higher than the headline rate.

Many Republicans have opposed further fiscal spending, calling for a halt to allow some $3 trillion of measures already approved by Congress more time to juice the economy. They have also been critical of unemployment payouts as a disincentive for employees to return to their jobs. Republican Senator is pushing a plan that would redirect stimulus into a $450-a-week return-to-work bonus.

But in recent weeks, as calls for racial justice intensified, the views of some in the GOP -– in Congress and President Donald Trump’s administration -- have shifted.

Trump’s top economic advisers have acknowledged that such policies are needed in particular as a protection for minority communities.

“Whatever we do to stimulate the economy right now, including expanding or continuing in some form unemployment insurance in it’s slightly expanded form, it’s very likely to disproportionately benefit” minorities, White House economic adviser told reporters on June 19. 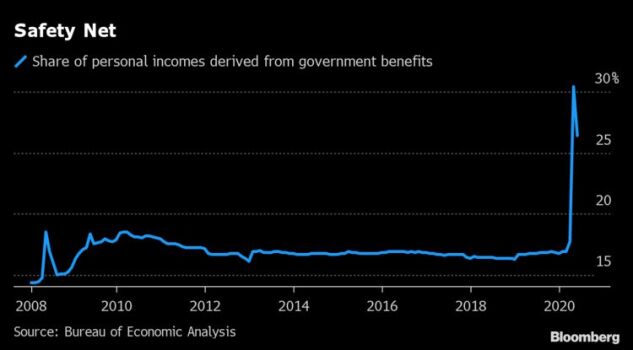 There’s also more readiness among Republicans in Congress to keep some form of a federal top-up. Voters seem to agree. A recent poll by Morning Consult and Politico found that 75% of Americans -- including 42% of Republicans -- favor extending the current jobless benefits.

All this means that an extension of the payments will likely be included in the next stimulus package, which the Trump administration and Congress plan to start negotiating in mid-July –- though there may yet be a fight over the exact sums.

Senator , the top Democrat on the Finance Committee, has backed a plan to maintain the $600 figure and only scale it back gradually as jobless rates decline. Wyden said today’s racial inflection point bolsters the case for generous benefits.

“This is a time when the country is not just going to accept a bunch of reports and studies and task forces,” he said in an interview.

Wyden also said his office will examine how Black Americans in particular have been affected by strains on the state-level unemployment systems, which struggled to cope with a deluge of claims. As of early June, about one-third of owed benefits hadn’t been paid.

“My gut tells me” that those still waiting for their money will likely include “a disproportional number of Blacks who would be eligible,” said Wyden.

Ever since the Bureau of Labor Statistics started reporting data for Black unemployment in 1972, the figure has been higher than the overall jobless rate. 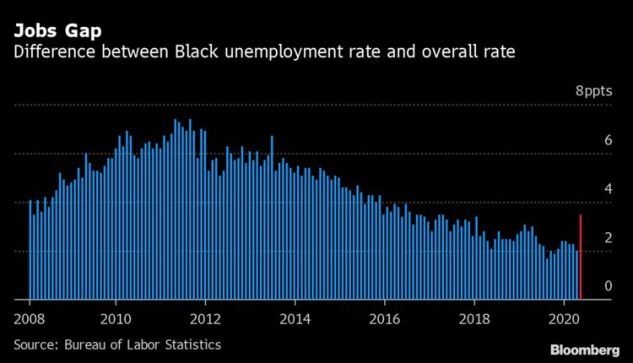 In good times, like the long U.S. expansion of the past decade, the gap tends to narrow. Last year it was the smallest on record, as the Black jobless rate hit a historic low of 5.4%.

But in recessions, the rate surges significantly higher for Black Americans. It reached about twice the level of White unemployment in the wake of the 2008 financial crisis. And crucially for the current benefits debate, Black Americans tend to stay unemployed longer.

By the end of 2014, Black unemployment was still in double digits while the rate for White Americans had recovered to within a percentage point of its pre-recession level.

Public benefits are especially important for Black Americans who typically don’t have as much access to private ones. They’re “less likely to be able to fall back on savings and wealth,” or have family and friends they could turn to with the financial resources to help out, said Alix Gould-Werth, director of family economic security policy at the Washington Center for Equitable Growth.

The median White household had a net worth of $171,000 in 2016, ten times that of its Black counterpart. The gap in home ownership rates between the two groups is about 30 percentage points, according to government data.

While it’s hit some communities especially hard, unemployment in the Covid-19 crisis has extended into every corner of the U.S., reaching levels not seen since the Great Depression era. And the extra federal cash has provided a lifeline for the whole economy.

Congress should focus on policies that benefit all vulnerable groups, said Rhonda Vonshay Sharpe, founder and president of the Women’s Institute for Science, Equity and Race. She noted that out of about 8 million White women who lost their jobs in the first weeks of the pandemic, only 1 million went back to work in May.

“The bottom line is this: If you remove benefits that help the most vulnerable population in America, it’s bad for America,” she said.