President used his inaugural budget request to signal his administration’s commitment to extending employment protections to broad swaths of workers who’ve been classified as independent contractors.

The budget plan the administration released Friday called for the U.S. Labor Department to receive $7.5 billion in the coming fiscal year to boost worker-protection efforts, including to root out misclassification.

“The Administration is also committed to ending the abusive practice of misclassifying employees as independent contractors, which deprives these workers of critical protections and benefits,” the blueprint said.

Biden’s emphasis on worker misclassification could have implications throughout the economy—including in the gig sector, where companies such as and Instacart Inc. rely on a workforce model that considers ride-share and delivery drivers as independent contractors, exempting them from labor and employment laws.

The administration pledged to work with Congress “to develop comprehensive legislation to strengthen and extend protections” for workers who are improperly denied employee status.

In effect, that language bolstered the White House’s commitment to passing a sweeping overhaul of federal labor law that the House approved earlier this year. The Protecting the Right to Organize Act features a new employment standard that would make it difficult for businesses to keep tagging workers as independent contractors under the National Labor Relations Act.

Since Biden took office, the Labor Department has shifted to targeting enforcement actions on employers that have allegedly denied workers overtime pay, minimum wages, and other federal protections by failing to classify them as employees.

The White House’s budget request for fiscal year 2022, which begins in October, asks Congress to help the administration build on its early emphasis on misclassification by awarding DOL a 14% hike in overall annual appropriations, to $14.2 billion.

That recommended boost would be split between increased resources for workplace enforcement, job training, and investments in unemployment insurance, among other areas.

Across labor agencies, the White House proposed that:

The White House’s budget is merely a proposal that kicks off spending negotiations; final decisions rest with Congress.

The administration also wants a spending bump for DOL’s largest subagency, the Employment and Training Administration, including a $100 million boost to registered apprenticeship funds designed to expand career training opportunities for people of color, women, and other underrepresented groups. 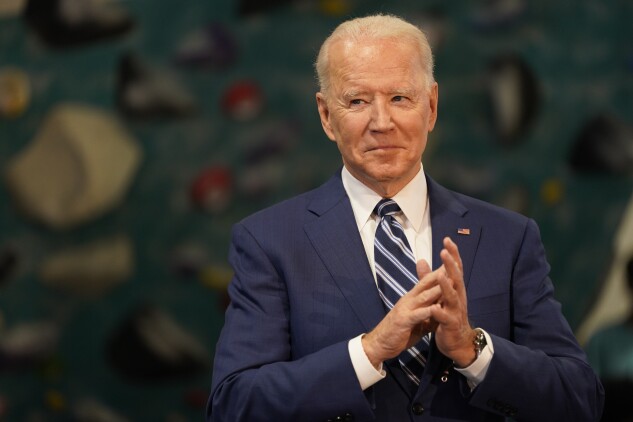 President Joe Biden applauds during an event in Alexandria, Va., on May 28.
Photographer: Chris Kleponis/CNP/Bloomberg via Getty Images

ETA would be responsible for distributing $3.7 billion in state grants to make employment services available to workers separated from their jobs by the pandemic and other disasters, a 6% increase from the prior year.

The proposal also includes a $50 million increase to occupational training programs for ex-convicts and young adults who didn’t finish high school; $100 million to retrain out-of-work coal miners in Appalachia; and $100 million for technological upgrades to states’ unemployment insurance systems, which struggled to process benefits during the pandemic.

The 10% bump the administration envisioned for the NLRB would end eight years of budget stagnation for the agency that oversees union protections for workers in private industries.

The administration proposed spending $2.1 million to educate workers about the NLRB’s mission of fostering collective bargaining—a provision that’s sure to draw opposition from Republicans in Congress. It also seeks to repeal a Republican-backed addendum to the budget that prevents the NLRB from implementing an electronic voting system in union elections.

“While the President’s budget will allow the Agency to make major strides to restore our regional offices, the NLRB needs at least $350M to fully recover from a destructive decade,” Michael Bilik, an official with the NLRB staff union, said in a text message.

Congress already approved $100 million for the agency through 2023 via pandemic-relief legislation, of which $75 million was expected to be spent on hiring and training of inspectors and investigators.

Biden’s proposal calls for adding 362 new positions, including 207 in enforcement and 63 in whistleblower programs. That would bring the agency’s total workforce to 2,246 individuals.

As of March, OSHA had a field staff of 975 inspectors and supervisors, and Labor Secretary has previously expressed a desire to add to the inspector ranks. The high for the past decade was about 1,150 field staffers in 2011.

The White House proposed an 18% increase for MSHA, which oversees worker protections in surface and below-ground mines. It also would add 324 new positions, including 216 for enforcement, which would raise total authorized positions to 2,031.

Biden’s proposal of $13.4 million for the U.S. Chemical Safety and Hazard Investigation Board is a marked departure from the Trump administration’s four budget proposals, which sought to shut down the agency. Each time, Congress rejected the Trump White House’s proposal.

The proposed increase for the EEOC would help fund the Biden administration’s “whole-of-government” initiative to advance equity.

Biden’s jobs plan proposes additional funding for the EEOC of up to $1.5 billion over the next decade, according to an agency budget document. The money would support “longer-term approaches” to dealing with sexual harassment, LGBTQ protections, discrimination, and pay equity in the workplace, the document said.

The funding would also help the EEOC participate “in a multi-year, multi-agency effort to combat worker misclassification,” though the document didn’t elaborate on what that would entail.

EEOC Chair Charlotte Burrows, a Democrat, said earlier that the agency would hire 450 staff members, a flurry of activity that could require additional funding in the coming fiscal year.

The proposed 20% increase for EBSA under Biden’s plan would be the largest in seven years for the agency, which regulates private-sector employee benefit plans such as retirement programs and health insurance.

Biden’s plan offers a 33% increase to the OFCCP, the Labor Department’s watchdog for federal contractors. The agency has already intensified its enforcement efforts under the Biden administration.

(Updated with additional reporting throughout. An earlier version corrected the fiscal 2021 funding number for the National Labor Relations Board, in the second bullet point.)