The Biden administration plans to revive a stalled occupational safety rulemaking that would protect workers against all airborne infectious diseases, not just Covid-19, raising the question of whether it will be developed in lieu of an emergency standard specific to the coronavirus.

The Occupational Safety and Health Administration intends to offer a draft version of an infectious disease rule in fiscal year 2022 and seek public comment, according to an OSHA spending proposal released alongside the White House’s fiscal 2022 budget request last week. That means a proposal could be released as soon as October, when fiscal 2022 begins.

If enacted, the rule could require employers to protect workers from hazards such as tuberculosis, drug-resistant staph bacterial infections, and severe acute viral respiratory infections, according to OSHA’s summary of the rulemaking (RIN:1218-AC46).

The announcement comes as OSHA’s long-delayed Covid-19 emergency temporary standard—now in its sixth week of review by the White House’s Office of Information and Regulatory Affairs—faces increasing pushback from Republicans and other critics, who contend the widespread availability of vaccines has made a virus rule unnecessary.

An infectious disease rule shouldn’t be a substitute for the Covid-19 emergency standard, said Rebecca Reindel, director of safety and health for the AFL-CIO.

“We know there are a lot workers still at a very serious, serious risk,” Reindel said.

The infectious disease rule initially was proposed in 2010 but was never finalized. OSHA completed a review focusing on impacts on small businesses in 2014. But since then, the rulemaking was twice relegated to OSHA’s list of “long-term actions,” most recently by the Trump administration in 2017.

After the novel coronavirus emerged last year, worker advocates and some House Democrats called for the rulemaking to be completed. At that time, some occupational safety experts viewed an infectious disease rule as a necessary precaution against the next pandemic and an effective complement to a Covid-19 standard.

Yet the White House’s review of OSHA’s Covid-19 rule, which has included numerous stakeholder meetings, is expected to continue through at least June 7, fueling concerns among worker advocates that it won’t be released or would come in a less-comprehensive form than what they have sought. 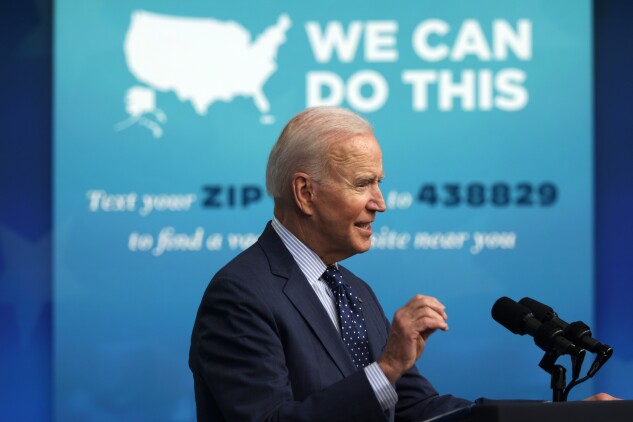 The administration’s budget documents for OSHA didn’t mention the Covid-19 rulemaking, and the agency hasn’t said publicly whether it believes the virus meets the “grave threat” to workers that would be needed to issue an emergency rule.

More than 100 House Democrats urged President Joe Biden in a letter Wednesday to release a Covid-19 emergency rule “immediately,” noting that more than two months have passed since his initial deadline for OSHA to act if it determined a regulation was necessary.

“Our nation’s workers need an enforceable federal standard that will ensure that their employers provide the comprehensive protections they need, including ventilation, respiratory protection, testing and screening, exposure notification, and on-site vaccinations,” the lawmakers wrote.

Richard Fairfax, who retired from OSHA as its career-service deputy administrator in 2013 and is now a consultant with the National Safety Council, said OSHA could have sought an infectious disease emergency standard instead of drafting one specific to Covid-19.

An infectious disease emergency standard—an expedited form of rulemaking that doesn’t require public notice and comment—would have been less vulnerable to the criticisms aimed at the Covid-19 rule recently, such as the argument that vaccines have mooted the justification for an emergency regulation, Fairfax said.

The infectious disease rulemaking under the Biden administration would follow normal notice and comment procedure. It would incorporate what OSHA and the Centers for Disease Control and Prevention have learned from the ongoing pandemic, said Jordan Barab, who was OSHA’s deputy assistant secretary when the rulemaking began in 2010.

Barab argued an infectious disease rulemaking wouldn’t diminish the need for the White House to promptly complete its review of the Covid-19 standard and allow OSHA to issue it.

One issue for OSHA in picking up the Obama-era infectious disease rulemaking will be whether to widen its scope beyond health-care and social service employers, Fairfax said. The Covid-19 pandemic showed that workers who labor close to each other or who deal with the public in any industry can be especially vulnerable to infection.

The safety agency didn’t respond to requests to discuss whether the proposed scope of the rule would be expanded.

“OSHA is examining regulatory alternatives for control measures to protect employees from infectious disease exposures,” the agency said in its summary of the rulemaking.

“Workplaces where such control measures might be necessary include: health care, emergency response, correctional facilities, homeless shelters, drug treatment programs, and other occupational settings where employees can be at increased risk of exposure to potentially infectious people,” it added.

If the agency opts for an infectious disease rule that applies to all types of industries, OSHA may have to complete a new Small Business Regulatory Enforcement Fairness Act review before issuing a notice of proposed rulemaking, Fairfax said.

That review, which can take several months to complete, brings in small business owners to explain what they would need to do to comply with a rule and offer suggestions for how the proposal could be revised.

(Updated to include letter signed by more than 100 House Democrats, in paragraphs 11 and 12.)