Biden speaks on his administration's Covid-19 response at the White House on Thursday.
Photographer: Al Drago/Bloomberg

President will mark his third day in office with executive actions to boost food assistance for impoverished Americans and use federal contracts as a step toward his proposed nationwide minimum-wage hike, seeking immediate help for an economy struggling to cope with Covid-19.

The executive actions Biden is set to sign Friday at the White House also include a restoration of rights for federal workers that were stripped by his predecessor .

While consequential for those affected, the measures offer a shadow of the relief included in Biden’s $1.9 trillion Covid-19 aid plan. That package faces challenges in Congress after moderate Republicans this week said they saw no need to rush on another big spending bill after last month’s $900 billion effort. GOP members including of Indiana and of Missouri said Biden’s plan was a “non-starter,” though they favored looking at the vaccine-funding component.

“These actions are not a substitute for comprehensive legislative relief but they will provide a critical lifeline to millions of familes,” , director of the White House National Economic Council, said at a briefing Friday. “Our economy is at a very precarious moment” and it’s one that requires decisive action.” 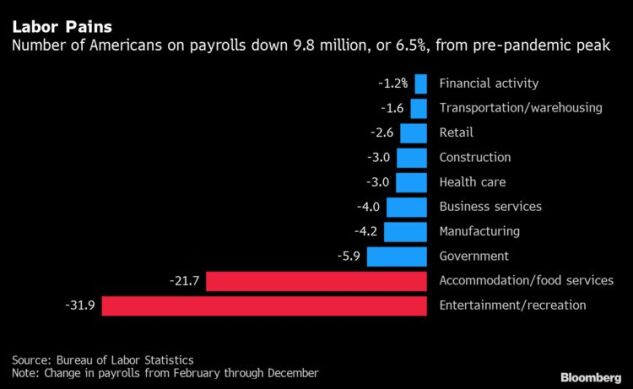 Deese is planning to discuss the $1.9 trillion package with a bipartisan group of 16 senators on Sunday. He said the objective was to make the case that without this action, the economy will be in a “much deeper hole.”

Sunday’s discussion is one of many avenues of engagement on pushing the stimulus forward, and Biden himself plans to “roll up his sleeves and make calls,” White House Press Secretary said Friday.

She also pushed back against calls to carve out parts of the package -- such as vaccine funding, as suggested by some GOP members. “The way that the package was designed was to address the core issues of the crisis,” she said. Psaki also said the relief cannot be delayed until March or later.

Democrats, meanwhile, are discussing making an end-run around Republicans. House Speaker told donors on a Zoom call Thursday night she had wanted to pass Biden’s Covid-19 relief legislation via the budget reconciliation process in two weeks, according to a person familiar with the comments. That process could eliminate the need for Republican support in the Senate by lowering the threshold for passage to a simple majority.

While congressional Democrats consider their strategy, Biden on Friday will expand eligibility for enhanced food stamp programs, assist veterans who are behind on their bills and create new tools to help Americans who have not received their stimulus checks get paid.

The president will also look to clarify that unemployment insurance should cover workers refusing positions with unsafe working conditions. And he will direct agencies to examine how they can ensure federal workers and contractors are paid a $15 minimum wage.

The administration is set soon to have a new policy maker on deck to help address the crisis, with advancing through the Senate Finance Committee Friday morning toward confirmation by the chamber. The by the panel opened the way for a full Senate vote as soon as Friday afternoon, senators said.

The better part of a year after the pandemic hit the U.S., weekly filings for unemployment claims in regular state programs are still running at 900,000, more than quadruple the pre-virus level. About 5.05 million people were receiving claiming the benefits as of Jan. 9, according to the Labor Department, with an additional 5.7 million weeks claimed under the Pandemic Unemployment Assistance program for the self-employed and gig workers.

Some unemployment benefits -- including the assistance for gig workers -- are set to expire on March 14, underscoring the administration’s desire for congressional action on the stimulus package.

The president is asking the Labor Department to issue guidance clarifying that workers can refuse employment that jeopardizes their health and still receive unemployment benefits. That could help service-industry and factory workers worried about the spread of the coronavirus at their job to stay home from work.

Biden will also ask the Department of Agriculture to issue new guidance that would allow as many as 12 million additional Americans to have access to food-stamp benefits that were enhanced during the pandemic. The president will also ask the department to make it easier for families to access a program providing benefits to children who would normally qualify for free school lunches, and increase the benefit by 15%.

And Biden will request that the Treasury Department create new online tools to help the estimated 8 million Americans who have not yet received the coronavirus stimulus checks to which they’re entitled.

Biden will ask the Department of Veterans Affairs to halt collections on overpayments and debts, in a move the administration says could help as many as 2 million veterans. Early in the pandemic, the VA halted collection for unpaid copay charges for medical care and prescriptions as well as pre-existing debts, but the department resumed collection at the beginning of the new year.

Elsewhere, Biden is rescinding a trio of Trump executive orders that made it easier to fire federal workers and imposed time limits on collective bargaining negotiations. The new president’s order directs federal agencies to bargain with federal workers when union contracts expire.

Biden is also eliminating Trump’s move to create a “Schedule F” classification for federal employees, which would have made it easier to hire and fire high-level civil servants. Democrats complained that the Trump administration sought the change to make it easier to embed political allies in the upper tiers of the civil service.

The executive order also directs the administration to begin work on an executive order mandating federal contractors pay a $15 an hour minimum wage, and asks departments and agencies to develop recommendations about how they can increase pay for federal workers making below that amount.

(Updates with Psaki comments in sixth and paragraphs.)